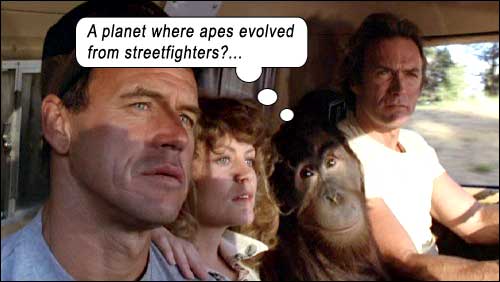 A street fighter. A love story. An ape.

Disguised as a simplistic road story, EVERY WHICH WAY BUT LOOSE is a paean to freedom; freedom from the strictures of routine, freedom to settle disputes like a man (If the problem can’t be fixed with a fist or a monkey wrench, it ain’t worth fixin’), freedom to fight for your ideals (even if those ideals impact the other guy’s chin repeatedly), freedom to choose love – or lust – as your Saturday Night Thing, and freedom to have interspecies BFF’s.

Written by first-timer, Jeremy Joe Kronsberg, and directed by James Fargo (assistant director on five previous Eastwood movies), EVERY WHICH WAY became Clint Eastwood’s biggest hit at the time of its release.

Musta been that freedom thingy.

Clint is Philo Beddoe, a San Fernando Valley good ole boy and hammer-fisted, bare-knuckle street fighter, whose best friend is a gregarious, lovable ape, Clyde (a quirky orang-utan named Manis, long since dead at the time of this writing). Providing a uniquely bizarre buddy presence, Clyde steals the show. Though totally replaceable as a plot element, he becomes irreplaceable as a star in his own right. 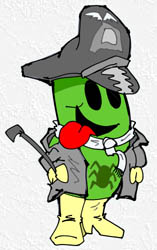 The Green Widda
(feared throughout the land)

EVERY WHICH WAY BUT LOOSE finds Clint at a perfect fit 48 – not too old to appear frail and not too young to appear green – spending much of his time in Shirtless Kirk mode in illegal street fights that pad his trucker income. Falling hard for Lynn Halsey-Taylor (skeletal Sondra Locke, playing a country singer even though she can’t sing worth a damn – yes, unfortunately that’s her voice on the soundtrack), Philo traverses the American heartland with his pal, Orville (Geoffrey Lewis), to woo her, whilst moronic cops and imbecilic bikers tail him tailing her, both groups on a vendetta against Philo (for their chins repeatedly impacting his fist).

Populated with Eastwood regulars (John Quade, Dan Vadis, Bill McKinney, William O’Connell – “Thems black widdas!” – and a very young, very sexy, Beverly D’Angelo), EVERY WHICH WAY is that type of homespun movie where a character can step up to a bar and order “a beer” – and get one!; where a barroom brawl breaks out and everyone starts fighting – for no reason and with the person they were sitting next to; this motley concoction of characters and contrivance could have slipped out of control very easily, instead exhibiting an easy grace that its star has become renowned for, and standing defiantly on its inspired silliness.

There is a throwaway scene where Ma (rocket-fueled Ruth Gordon) chastises Philo for Clyde’s misbehavior, whereupon Philo approaches Clyde and points an imaginary gun at him. Clyde puts his hands up, Philo exclaims, “Bang!” and Clyde suddenly falls back flat as if shot. Funny and cute on the surface, only Clint aficionados will see the satire, as Clint assumes the relaxed lean of one of his avenger characters and – in a film where he never wields a gun – uses a pretend-gun to fire the punchline. (EVERY WHICH WAY followed three movies where Clint’s gunhand got a heavy workout – as Dirty Harry in THE ENFORCER 1976, THE OUTLAW JOSEY WALES 1976, and a film where more than a million rounds were expended trying to mow down his Ben Shockley in THE GAUNTLET 1977.)

Eternally unassuming about his “living legend” status, Clint is more inclined to crack a bemused, embarrassed smile over the effusiveness afforded him at awards ceremonies, rather than transform into Hollywood Ass. Willing to parody his own legendary characters, during a confrontation with the imperiously impotent bike gang led by Quade, The Black Widows (Feared Throughout The Land), we hear a snatch of THE GOOD, THE BAD AND THE UGLY theme. 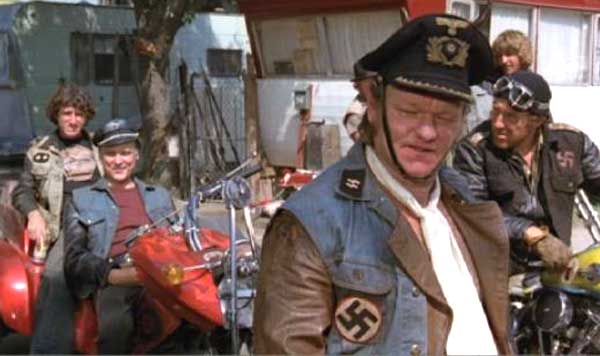 The Black Widows. Feared throughout the suburb of Reseda.

The country music soundtrack is surprisingly fitting and uncharacteristically enjoyable, especially the nostalgic, poignant title track, sung by Eddie Rabbitt. To make minimal sense of the grammatically incorrect title, simply preface three words of the song lyrics: “You turn me every which way but loose…”

Though the movie is played for laughs aplenty, it is a Queen song disguised as a Hansen song, ending on a very dark note – while the crooked cops and incompetent bike gang draw our attention as villains, it becomes apparent in the final scenes that the vilest villain is the woman who turned Philo every which way – Lynn Halsey-Taylor. There is no formulaic reconciliation with Philo, as Lynn maintains her stance as an unrepentant philanderer and turns her back on him. Philo then throws the film’s final fight, for mercenary reasons. We don’t often see these “types” onscreen; like the incestuous family in CHINATOWN, these characters are socially-shunned “types” that slap us awake to the possibility of conclusions besides Hollywood pap.

I just hope that when I’m 48, I’ll look as good as The Shirtless Clint.