Education Takes a Hit and Myth.

Only two things are infinite: the universe and human stupidity – and I’m not sure about the universe.
— Albert Einstein.

he first time I heard the words “intelligent design,” I thought it was a euphemism – however misapplied – for Evolution.

“Intelligent Design” is merely a re-rendering of the term “Creationism” to keep apace with the changing aspect of public sophistication. It minutely augments the “creationist” stance in specifying that not only was the universe created by divine fiat, its complexity implies an Intelligent Designer (an adherent to the cardinal rule of “no primary colors next to pastels”?) and is the latest attempt at diminishing the fanatical “religious” overtones intrinsic in the word “creationism.” 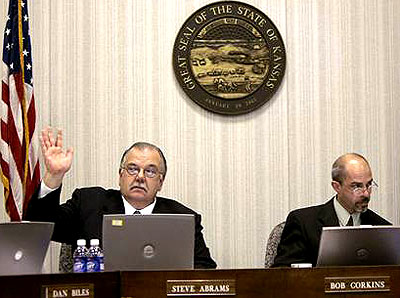 Kansas (stop that laughing in back!), whose Education Board officially entered the Twilight Zone in 2004 when they granted credence to Intelligent Design by arguing its validity alongside Evolutionary theory, has ambiguously amended their Curricular Standards for Science Education (revised: Nov 8, 2005) to include a clause which “neither mandates nor prohibits teaching about this scientific disagreement.” In essence, Kansas is redesigning unintelligence. (Firstly, I.D. is not “scientific” – it is pseudo-science. Secondly, it is not a “disagreement” – it is sociopolitical leverage on a monumentally irresponsible scale.)

As incredible as it may sound, our children may actually be “taught” that we are not only generated via sexual pairing of gametes (with attendant biological proof, from decades of scientific research), but that humans can also be brought forth from dust (proof being a verse in a book authored by an invisible guy who created humans as nudists, until they disobeyed him!).

Thank you, Kansas. Thank you so bloody much.

Meanwhile, in Pennsylvania, Creationists vying to retain their seats on the Dover School Board were defeated by a narrow margin, by candidates from Citizens Actively Reviewing Educational Strategies (CARES), who advocate keeping Intelligent Design out of the classroom. William Buckingham, who previously headed the Dover board and initiated the I.D. furor in late 2004 with his self-admitted “deer in the headlights” interview (opining that biblical creationism should be taught alongside Evolution), is very rightfully being attacked by lawyer Eric Rothschild for perjuring himself in claiming that religious agenda was not his motivating factor, and is very wrongfully being allowed to recant and backpedal and politically weasel his way out of accountability.

Though this was a victory for intellectualism, we must nonetheless question, mouths agape like Buckingham’s headlighted deer: a narrow margin?!

The Jesus freaks are winning… not because they have gained a few seats in various states, and not because they seemingly oust Evolution’s primacy, but because their supernatural and unverifiable idiom has been granted legitimacy at all. Can there ever be intelligent debate between a discipline which exalts a dynamic process of postulation, experiment, discovery and self-correction (the Scientific Method in a nutshell), and a close-minded faction who petulantly claims a proprietary stance simply because their invisible leader in the sky says so?

Though they transparently maintain their position is not predicated on religion, Intelligent Designists must have squirmed in their penitent agony booths when religious demagogue and paragon of ignorance Pat Robertson artlessly outed them in a faux pas broadcast, following the Dover School Board election, prophesying doom for Dover for “voting God out of their city.” His harbingering must have some element of truth, as his theories on “feminism creating baby-killers, witches and lesbians” is all too apparent in our baby-killing, black-magicked, lesbianic society.

But no one’s fooling anyone. In the 1600s, for their scientific publications, Galileo was forced to recant under threat of death and Giordano Bruno was burned at the stake – by the Catholic Church! It has always been Advancing Science versus Stagnating Religion. This particular “Evolution versus Creation” wound has been suppurating since Charles Darwin published The Origin of Species in 1859 – the touchstone for Evolutionary precepts – with its own watershed moments: 1860’s Thomas Huxley defending Darwin against the wrath of Bishop Wilberforce at the British Association for the Advancement of Science; to 1925’s Scopes “Monkey” Trial, where agnostic Clarence Darrow defended John Scopes against three-time Presidential candidate, fundamentalist William Jennings Bryan; to what seemed to be the res judicata of the debate in 1987, when the Supreme Court voided the last remaining Louisiana Creationist statute, calling it “a sham designed to make public schools espouse religion, in violation of America’s separation of church and state”. Thus do we discern the snide rationale behind removing “religion” from the New Terminology – armed now with “Intelligent Design”, the Bullshit-Artists Formerly Known As Creationists get another stab in the dark at undermining intelligence.

And this time, they come at intellectualism with the unexpected alliance of a stuttering imbecile at their helm – who happens to be the “Leader of the Free World.”

President George W. Bush, in his now customary quasi-conscious state of constant befuddlement (who probably believes “separation of church and state” means that his office and chapel should be in two different buildings), opined last year that Intelligent Design should be taught in schools, thereby giving the green light to the incomparably misnomered “Religious Right” (spearheaded by Fundamentalist Christians, the bedrock of I.D. advocates) to blight the school systems in dozens of U.S. states by rallying behind his Neanderthal suggestion.

Of course, those mightier-than-thou Fundamentalists fail to perceive the irony in the C-student Bush espousing on “education” and “exposing people to different ideas,” whilst – doubly ironic – his lip service is belied by his own administration’s cutbacks on education funding! (In Bush parlance, No Child Left Behind means More Morons On The Streets).

The other irony which these New Inquisitionists seem to miss is that in lobbying for ostensibly more education, in a system which is so understaffed and insufficiently funded that it is currently pimping children into the American population with already-questionable education levels, the groundless Intelligent Design agenda will actually serve to make children less educated. Because, unlike Scientific Method – which Creationists doggedly refuse to apprehend – Intelligent Design propounds specious rationale (disguised in the very vernacular which it disparages – Science) and serves to discombobulate existent scientifically-sound facts and theories.

The most vocal I.D. proponents misunderstand the very concept they rail against: “You can’t just tell children that they come from monkeys,” laments Randy Thomasson, President of Campaign for Children and Families, California, with Frozen Deer Buckingham echoing those exact words – yet Evolutionary theory does not teach that “Homo sapiens evolved from apes,” but from an “ape-like” creature, a markedly different animal from the feces-flinging Pan troglodytes abounding in our modern zoos. And these same uninformed Pan troglodytes, with faux-prestigious titles of zero worth (Judy Smith, Kansas Director of Concerned Women -!) cite conceptual idiocies against Evolution, which mean absolutely nothing, but find their way into the international presses: “[Intelligent Design] allows for academic freedom… instead of dogma in science” – yet academic freedom would ideally be the Scientific Method, funded as flagrantly as the militia; and there is no “dogma” in science, Our Lady Of Concern! Any wonder that the term “Intelligent Design” has found such a bedrock of support, as its “intelligent” nomenclature implies it is indeed sorely needed – by the selfsame people who are subscribing to its precepts!

Ultimately, it is a symptom of the low standard of education which has inspired the I.D. debate at all. Would a truly educated society spawn such arrogantly-uninformed zealots? With the lack of a prescribed “Method” – and the abject refusal to establish one with which to qualify their outrageous dogma – Intelligent Designists advocate an aesthetic predicated on vacant air and unfulfilled promises, circular reasoning and specious mathematics. And it will all come crashing down when somebody sails off the edge of the flat Earth…

It took Europe millennia to stumble into the cauldron of superstition and ignorance that were The Dark Ages; it’s only taken America a scant two centuries.

Start boning up on your Chinese.

The cultures which are at this moment laughing their butts off at America’s elevation of pseudo-science to the level of world-girdling import, are well aware that they are essentially more “advanced” than America – technologically, culturally, educationally, financially and spiritually. Randolph T. Holhut, American Correspondent, reports that India’s education system turns out more than 40,000 computer science graduates each year, and enrollments are rising – while U.S. science programs falter; and each year China turns out five times more engineers than the United States. (Try doing that “It’s Fried Rice, you plick!” gag in ten years – you’ll be Jeet Kune Do’d faster than Mel Gibson in Lethal Weapon 4.) America’s ultimate decline will not be through its lack of weapons, but its lack of intelligence, which will be far more destructive than all the “nookuler” power that George W. Bush believes is his trump card.

It will be not be a hostile takeover, nor will there be any casualties of war; the sensible cultures of the Earth will merely osmose under America’s skin, effecting a renaissance of true free thinking, gradually over-running the vestiges of America’s criminally political past, all bloodied money, prostituted oil and laughably fragile civil liberties… It won’t be a takeover designed on speed of attack or killing power. It won’t be designed on nuclear strikes or fuel embargos. It won’t be designed on infantry movements or covert operations:

The takeover will be one of truly Intelligent Design.

EVOLUTION VS. CREATIONISM
The Intellectual Death Of Kansas