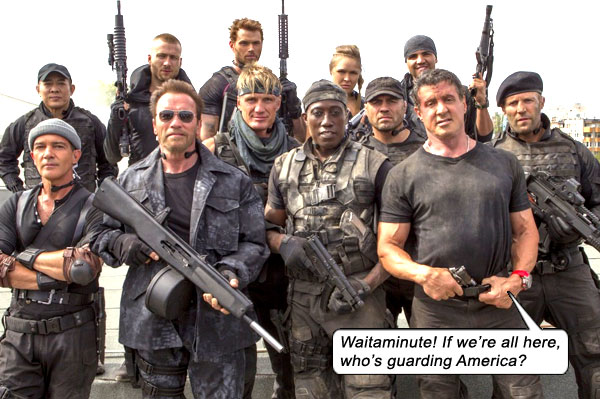 Sylvester Stallone buys a book from amazon.com called 1001 Dependable Movie Clichés (and How To Utilize Them All In One Movie). Then he writes THE EXPENDABLES 3.

DEPENDABLE CLICHÉ: Opening action sequence so outlandish you might think you’re watching THE AVENGERS; will blow your mind or make you roll your eyes, depending on your age demographic.

DEPENDABLE CLICHÉ: Old lions replaced by young guns. Barney looks around one day after a blow-em-up mission and sees the grass brown and the social security check in the mailbox (i.e. it’s autumn and no one’s gettin’ any studlier), so disbands his loyal brahs in favor of brawlers who still have all their own teeth.

DEPENDABLE CLICHÉ: Old versus Young; snappy repartee and insults fly between old lions and young guns. Irony is: these young guns come with no legacy, we feel no connection with them, we don’t care if they live or die – now they really ARE “expendables”!

DEPENDABLE CLICHÉ: Looker With Insubordination Complex (Kellan Lutz, THE LEGEND OF HERCULES); the “What’re you running from?” cliché.

DEPENDABLE CLICHÉ: Blade gets to be blade. In competition with Statham, Snipes is also a knife-man.

DEPENDABLE CLICHÉ: Another seaplane with teeth painted on it.

DEPENDABLE CLICHÉ: One of the Expendables is mortally wounded, causing Barney to get cold feet (“The ride’s over”) and disband the team.

DEPENDABLE CLICHÉ: Bigger-than-usual army guy sent in to fight fight punch punch Statham – because that’s what this army needs – more punching rather than guys who can aim.

DEPENDABLE CLICHÉ: Arnold: “Get to the Chah-pah!”

Their faces are discolored, their skin is sagging, their eyes glazed over with mucus, their mouths deformed. They’re not monsters, they’re just old.

Bloated Arnold Schwarzenegger looks downright haggard, like he’s about to keel over from eating too much. Then – Harrison Ford as Drummer, looking even older, his mouth a pulpy formless slug. (How’s he gonna do EPISODE VII like this?) Jet Li (who might break a bone if he attempts any karate) with three lines, most of them aimed at being Arnold’s bottom bitch. 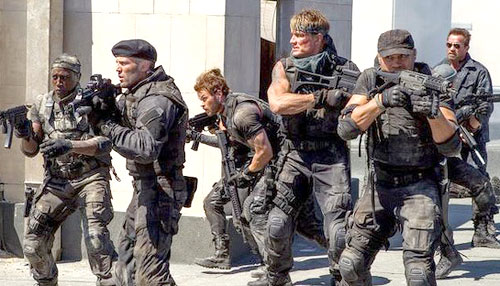 DEPENDABLE CLICHÉ: Barney’s team, standing on the runway, legs akimbo, all manner of weapon dangling from their big-dicked selves, Statham declaring, “You were stupid enough to get yourself into this mess – we’re the only ones crazy enough to get you out of it!” Statham is still in stellar form. How could anyone conceive of calling him old?

Speaking of too old for this shit, Danny Glover’s hetero lover Mel Gibson is Stonebanks, movie’s resident villain, floating in a sea of DEPENDABLE CLICHÉS:

DEPENDABLE CLICHÉ: Correction – Stallone couldn’t possibly jump into the damn chopper – he MUST hang onto the chopper’s struts. It says so right there in 1001 Dependable Movie Clichés.