Ladies, don’t go near this movie if you don’t want to get pregnant. 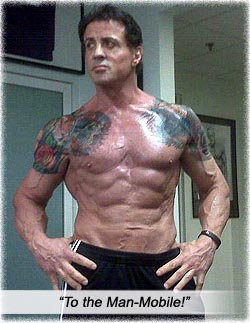 Sylvester Stallone and his man-team infiltrate a junta compound to rescue a chick. Explosions. Gunfire. Wrestling matches. Man-banter. Big explosions. Then some bigger explosions. Then an explosion so big it will rattle the testosterone right out of your ballsac and into the nearest female’s womb. That’s how manly THE EXPENDABLES is…

Seems Stallone has given up trying to impress audiences with his considerable acting talent and opted, in his autumn, to revert back to the gunmetal thunder of his macho youth that involved beating up people and baritone mumbles. (Autumn? At 64, still built like a freight train. Now that’s the power of will, the power of diet, the power of, uh, steroids.)

Stallone heads a mercenary team informally known as The Expendables, which includes Jason Statham (most agile), Jet Li (most diminutive), Terry Crews (most trapezius), Randy Couture (most xtreme) and Dolph Lundgren (most junkie giant). Eric Roberts (most B-Movie) is the villain, with Steve Austin (most neck) as his muscle.

Arnold Schwarzenegger and Bruce Willis cameo in a man-banter scene with Stallone that makes its own semen sandwich. Mickey Rourke (most tattooed) is an ex-member of the boy band, who surprisingly turns out to be the heart of the movie.

It is Mickey’s tragic baritone mumbling about how he could have saved one woman’s life, after taking so many lives in a war zone, that spurs Stallone into going non-merc and rescuing one of the hot women for free (apparently to redeem his soul, but mostly cos she looked like a Euro runway model), and our hearts go out to him and his boys for having to kill all those faceless junta drogues who can’t hit the side of a barn with their machine guns and army training.

A wet-dream tough guy ensemble, Stallone directs and co-writes and beats up people and baritone mumbles.