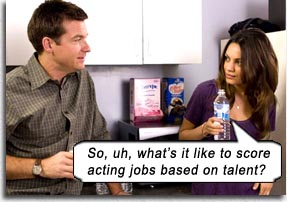 Mike Judge (OFFICE SPACE, 1999) writes and directs this amusing little tale of Joel (Jason Bateman), owner of an extract factory, who is so dissatisfied with his non-existent wife-sex, he conspires to force her into an affair so that he himself can have a guilt-free affair with one of his hot new interns. To his chagrin, his plan goes horribly right.

Meanwhile, all is not well on Joel’s factory floor, as an injured employee (Clifton Collins Jr.) is threatening to sue the company for an accident that nearly castrated him. And the temp whom Joel wants to fool around with (Mila Kunis, still scoring acting jobs based on her looks) is a grifter busy seducing the injured employee to scam him for the insurance money.

EXTRACT, though not a classic like OFFICE SPACE, is still an amusing diversion; well-written and directed, with many funny vignettes: Joel and his buddy trying to get seduction details just right with the airhead gigolo; the gigolo returning time and again to do Joel’s wife “for no charge, dude”; the death metal bandguy handing out flyers to his “gig” (a backyard garage performance); Ben Affleck’s long-haired, bearded barman character whose sage advice on dealing with life problems is suggesting which hard drug best suits each problem…

Judge knows how to fill the screen with quirky characters: the neighbor like a skin rash who won’t take a hint (David Koechner); J.K. Simmons as the floor manager whose disdain for the staff causes him to call them all “Dinkus” and/or “Boy Genius”; and another Simmons as the dastardly Jewish lawyer – the one and only, Gene – overacting as if he’s onstage at a KISS concert.

Judge creates a very watchable comedy – although I don’t think I can ever forgive him for Beavis and Butthead.