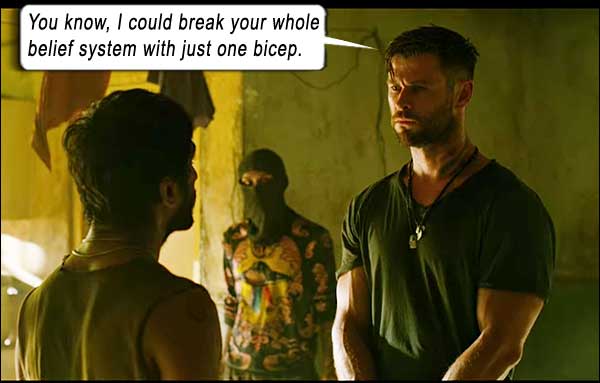 His name is Tyler Rake. Rake, not to be confused with hoe, which is his profession – mercenary, selling his services for cash.

Chris Hemsworth is special ops action-merc Tyler, hired to rescue an Indian drug lord’s son from a rival drug lord in Dhaka, Bangladesh. EXTRACTION is a straightforward snatch-and-destroy, chase-and-defend, bullets-and-meatballs story that will blow your roof off, but the way it is filmed – will blow your mind.

We’ve seen all these chase movie tropes before, and we’ve seen long unbroken takes before, and we’ve seen gutshock gunmetal action before, but director Sam Hargrave (a veteran stunt coordinator, directing his debut feature film) has re-energized the CAR CHASE and HAND-TO-HAND COMBAT with camera moves that are virtually impossible! Hargrave’s camera moves seamlessly from inside a fleeing vehicle, out into the mayhem exterior of the chase, and then swooshes back inside the vehicle without cutting. His combat camera throws us headlong into the hand-to-hand so that Chris Hemsworth is beating US up (oh, yes please!). These aspects elevate this movie above the usual trope-laden actioner, which EXTRACTION definitely is.

We have the damaged special ops guy, an alcoholic merc, haunted by a dead child, on a mission to save a kid that becomes his surrogate child; his whole team decimated, leaving him to fight his way out of enemy territory alone; what started as a money job is now a personal arc of redemption – it’s all here, with the filmmakers loading the deck to ensure a tearful ending. If it weren’t for the immersive filmmaking, it would be just another insufferable military bigdick excursion into testosterone.

But EXTRACTION does a few other things right. For example, usually movies of this ilk open with an action scene showing off the hero’s expertise, but the filmmakers go the opposite route, illustrating Tyler’s prowess in a really cool subdued way: he’s snoozing in a clearing while two mates are having beers; one of them is fearfully peering over the edge of a 100-foot drop to a lake below. Tyler wakes, takes a swig of his beer, tells his mate to “hold it, not drink it!” walks purposefully to the cliff and simply leaps off without a thought – to the surprised cries of his mates – plummeting to the lake below. Cut to Tyler at the bottom of the lake in meditating position, cross-legged… In one adrenalized scene that didn’t involve any shootings or punchings, we have achieved badass.

As Tyler returns home that evening, his mercenary contact Nik (Golshifteh Farahani, ROSEWATER) greets him on his porch to offer the job – much like Keegan Michael-Key finding Retired Military Specialist Decker returning home. In the heart of the bush, in a cabin open to the elements, chickens clucking around his bathtub, Tyler lives the life of Fat Thor: drunk, disorderly, devil-may-care. Except not fat.

Tyler swigs alcohol with pills, and accepts the job because he needs the cash, but Nik is worried about his suicidal streak, “You’re hoping if you spin the chamber enough times you catch a bullet.” Okay, Movie Tropes, enough badass.

We meet the jailed drug lord Ovi Senior (Pankaj Tripathi) whose kid Ovi Junior (Rudhraksh Jaiswal) was kidnapped, empowering his own ex-special ops right-hand man Saju (the cool Randeep Hooda) to bring his son back alive. Saju is humanized, by showing us his beautiful wife and young boy about Ovi’s age, which is another cool move, because it twists our loyalties; yet we have to wonder why we are being set up to care for this guy – because he works for a DRUG LORD! How principled can he possibly be? The rival drug lord Amir (Priyanshu Painyuli), on the other hand, is just straight-up psychotic, ordering his soldiers to toss boys off a roof for stealing from him. He earns the misdirected gratitude of one teen (Suraj Rikame) by sparing his life – a teen who would prove fatally fanatic… 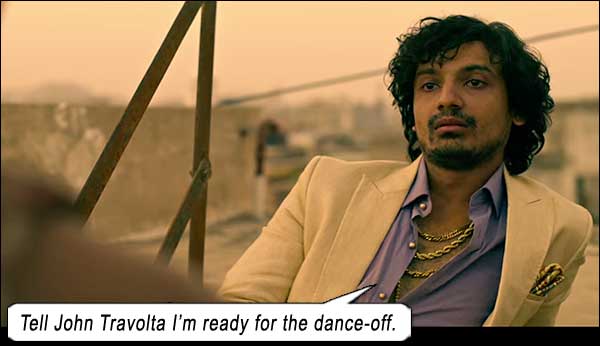 Acquiring the kidnapped kid Ovi is relatively easy, with stock action-movie combat pap, as Tyler relies on his Thor-ish arms and hidden support team, especially the cool Noah-beard sniping of Gaetan (director Sam Hargrave himself!). He also kills someone with a rake. Because namesake. (I also like how Tyler shoots armored soldiers at close range above the neckline, above the Kevlar vest into the neck.) But Tyler’s support team is quickly dispatched by Saju’s team, leaving Tyler and Ovi alone on a battlefield grid. (At one point, they escape into the sewers!!! – Oooohhh Christ!!! If you know what an inhuman, non-planet-Earth smell an Indian sewer exudes, you’ll know how they are defying Death Himself by being IN one.)

The HOW DID THEY DO THAT? moment: Tyler and Ovi flee in a sedan, while the camera follows in an unbroken take, flailing around encapsulating all the action around them: chase cars, speeding bullets, civilian traffic – when suddenly – Tyler does a hand-brake spin and the camera swooshes inside the back of the car seamlessly! At first, I was not sure what I was seeing! It’s an impossible camera move! Then it goes outside again through the back window, then back in again just to prove what a smartarse it is! We saw how impossible camera moves were achieved in Sam Mendes’s 1917, where cameras were hitched onto cables from carriers, or taken off the backs of rolling vehicles to create seamless long takes – but 1917 was never tracking a car chase in the midst of furious Dhaka traffic.

The other astonishing HOW DID THEY DO THAT? moment: After an already-long unbroken take, fighting off soldiers in close combat, which even involves a jump across roofs (astounding camerawork, planned meticulously and executed brutally, tracking every grapple, every Spock Chop and leg break, with Hemsworth right amongst the stuntwork like JOHN WICK), Tyler finds himself in hand-to-hand with Saju. And the take just never stops. Even after they both fall into the street from a balcony, the camera just floats down to join them as they recover in the busy street, fighting while people go about their business, drive through their combat – with Tyler eventually hit bodily by a car; Saju grabs Ovi from three soldiers, then he too is hit by a truck, driven by Tyler! The relentless camera has yet to take a pee break.

In that brief interim where Saju has Ovi, we see his concern for the boy, “Are you hurt?” setting our emotions on a raging sea of indecision. Who do we side with here? Saju was introduced very early in the movie as being Ovi’s protector. During the chase, Ovi shouts to Tyler, “Let me go! Saju works for my father!” Tyler: “*I* work for your father! But something is fucked here! Saju could have a deal with the men who grabbed you and send you back to them!” (Tyler is thinking like a merc, which he knows Saju is, from the way he fought).

EXTRACTION exemplifies the ambiguity of evil. Let’s face it: ALL these people are what society terms “bad”! From Tyler (killer for hire) to Ovi Senior (drug lord in jail) to Saju (a drug lord’s right-hand man) to Amir (the opposing drug lord).

Yet we feel sorry for Saju when he recovers in a hotel, cracks his broken nose back into place, and calls his little son, promising he’ll be back by tomorrow. The saddest visual is when he kisses his phone tragically to say goodbye.

So with everyone being a bad guy, we can understand when David Harbour rolls up and offers Tyler $10 million to kill the boy. Harbour made some waves on STRANGER THINGS and then made panties explode when he bared his arms on SNL; here, he is Gaspar, an old merc buddy, whom Tyler turns to for a safe house. But Gaspar makes the point that the kid will never be safe; Ovi’s life means nothing as a pawn in a gang war. Gaspar made a deal with Amir (the bad bad guy, for those playing along at home): kill the kid and Tyler walks with $10 mil.

As soon as Tyler declined killing Ovi for the money – Movie: “So you have chosen death, Hemsworth!” His merc personality had turned a corner. That means as soon as Ovi is delivered, Tyler is redeemed, and it’s then irrelevant whether he lived or died after that moment…

This coolness had to happen: Tyler calls Saju – “I need your help.” Two relentless mercs banding together to take on the Bangladesh army in Amir’s employ. Now we want Saju to live as well, for all his badass expertise, but he’s the Hollywood Expendable Hero. His redemption is in Tyler accepting him as a fellow merc. He can die any time now…

The battle for badass. Who’s cooler: the black panther or the white lion?

One sad state of affairs is glossed over completely – that all the Bangladesh police in the employ of Amir have wives and kids too, and they are just doing their jobs to put food on their tables. Why are they automatically BAD guys, when we could regard them as mercenaries themselves (doing unsavory jobs for the money)? In the end, is one kid’s life worth the death of all these husbands and fathers? That’s why I agree with Gaspar: “Kill the kid, make 10 million, disappear; you’re a mercenary!” Because if you completed your job of delivering the kid, it’s not noble, it’s complying with the wishes of a drug lord, a felon, a murderer; and it will only spur more gang wars. More husbands and fathers dead.

Joe Russo and Anthony Russo (THE AVENGERS guys) screenplay, from a graphic novel called Ciudad by Ande Parks and Fernando León González (Oni Press, 2014). And director Sam Hargrave brings his inspirational one-take cameras, and shows us, like so many filmmakers before him, that if you make an American film in the Middle East, the sky has to be a mix of bad day on Mars and urine yellow.

A quick wrap-up, to show that Fat Thor’s death was not in vain, as Nik shoots Amir in a toilet. This means the gang wars will not continue over the kid. How convenient.

Final scene: Ovi dives off a highboard and meditates at the bottom of a pool – where and when did the kid learn this? Tyler never went camping with him! And when Ovi rises to the surface, an ambiguous final frame, as we see an out of focus shot of Maybe-Tyler at the pool edge – a direct result of the headline: “EXTRACTION test screenings divided audiences.” Why do filmmakers allow themselves to be swayed by the uneducated Unwashed? Oh, the hero died, and that didn’t sit well with the weak-minded Karens and Chads who had to boo-fucking-hoo their milquetoast opinions and force the creator to dilute his art. So what is this shot meant to achieve? If the Ks and Cs walk away debating on whether Tyler is still alive, that makes them happy? Bigger morons than I thought they were.

Rake, not to be confused with bitches (test screening audiences).