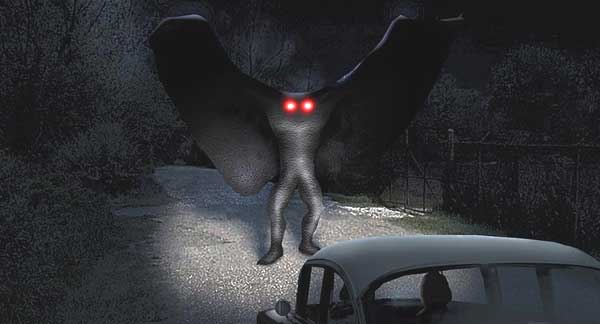 The Mothman Sightings: Too Legit to Flit.

Wake me when the Wamsley’s over. Jeff Wamsley – Mothman aficionado and Night Ranger enthusiast.

Is it possible to make a more pointless and boring documentary about something which is pretty eerie even to skeptics? In EYES OF THE MOTHMAN, writer-director Matthew J. Pellowski delves into the legends behind the infamous, mysterious Mothman – an undefined entity allegedly sighted repeatedly by residents of disaster-plagued Point Pleasant, West Virginia during the 1960s. But he may have also found the cure for insomnia… 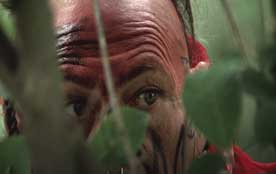 Documentary is broken up into segments, the first being “The Curse of Chief Cornstalk,” where Pellowski’s voiceover drones on in mortifying detail about the titular Shawnee Chief, a Native American from the 1700s who was betrayed by the immigrant settlers who called themselves “Americans” (oh, you mean like every single Native American who ever lived through European settlement and subsequent genocide?) and cursed the land around Pleasant. After repetition and inane minutiae that should put even historians to sleep, replete with octogenarian talking heads who look like they were actually there in 1778, just as we’re wondering whether Cornstalk has anything at all to do with the Bigfoot-like sightings of the Mothman, we discover he doesn’t!

Thus originated the Curse of Chief Cornstalk, which has nothing to do with the Mothman, but which is attributed to many of the unsavory events around Pleasant. And since it’s a curse from a dead Native American Chief – which means it is actually nothing at all – it means Cornstalk has nothing at all to do with anything, bad or good, in Pleasant. Which means Pellowski has just wasted 30 minutes of your life. One of the buck-toothed descendants of the Chief explains, “My grandfather taught me that curses only work if you believe in them” – he says while believing in them.

And on and on this documentary drones. And on. And on. Pellowski spends the next thousand hours describing the contamination of a lake. You can only say it so many times and from so many angles before it becomes repetitive beyond tearing your eyes out. And Pellowski says it all those times. He tries to offer “scientific” explanations for the Mothman creature – like mutagenic effects on plants and wildlife due to chemical dumping; he mentions the coelacanth, and a pterosaur that might have survived extinction; all efforts to make the wild insanity which is to come sound more cogent than it really is. 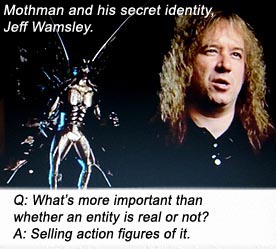 By the time we get to the Mothman sightings, we’re so bored and desperate we’re ready to believe anything. Isn’t that how superstitions usually start? But then, how many times can you describe sightings of an eight-foot “flying man” before you bore your audience to belching bitchslapping? Pellowski aims to find out. He starts throwing in UFO sightings and alien abductions, a couple of kooky-looking paranormal-investigating twins, even Men In Black – this thing has everything!

What scared me more than any of the sightings and stories – those southern accents: “Ah sow a big, bahrd-lookin’ thang up’n near mah barn.” My God! The aliens are already among us!

Of all the talking heads, the most humorous must surely be Jeff Wamsley, author -snigger- of the book, Mothman: Behind The Red Eyes. The guru of Mothabilia, sitting with his little Mothman action figure – a superhero-type, man-muscled hominid with mothy wings the size of which wouldn’t support a small child let alone something the size of an 8-foot man. So let me get this straight: there is an action figure of something which was never clearly seen, never positively identified, whose shape and form changes with each “eyewitness” account, yet some artist has crafted this action figure as if it really exists in this form. And we know – we just know – that there are innumerable rednecks who think this model IS the Mothman. Like their framed pictures of white Jesus over the mantle. That’s Jesus. Yes it is.

I couldn’t make it through the whole documentary. Could I have missed something important? Do I care? You win, Pellowski. Two and a half hours of bullshit was too much for any rational, educated person, even as a joke. And I think Jeff Wamsley is actually serious.