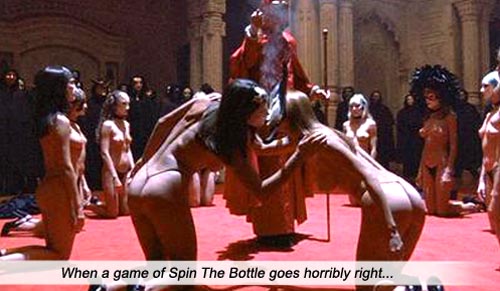 Tits tits tits. Not banana teats, cow udders or raisins either, but perfectly-rounded, gently-sloped baseballs to cantaloupes. On women ivory-legged, flat-bellied, pear-buttocked, butter-smooth, hungry-lipped, not one a notch below 9. Call it art. Call it exploration of the dark side of the soul blah blah. Fact is, a magnificent portion of EYES WIDE SHUT is naked women. Simple. Kubrick “clothes” this prurience in the mantle of filmmaking, but isn’t that how all artists score bitches (from rock stars to architects)? By couching their base intentions in seeming nobility? Yet, ironically, there can be nothing nobler than desiring to procreate, yet that too is cloaked in the bait-and-switch of family-raising.

But back to the naked women… Who are they and what do they want with my willy?

They are the licentious consorts at the exclusive sex mansion that Dr. Bill Harford (Tom Cruise) infiltrates and then finds he can’t escape.

You see, Harford and his wife Alice (Nicole Kidman) started speculating one night about their sexual fantasies and Harford discovers, to his chagrin, that hers are more exciting, more detailed and more likely to happen than his, which sets him on a libidinous quest to live lewd. No matter that the couple is happily married, have a daughter and successful jobs, let the blue-balled odyssey begin…

Cruise and Kidman reunite as an onscreen couple – again (DAYS OF THUNDER 1990, FAR AND AWAY 1992), this time reportedly straining their real-life marriage with the hurtful residue of their brilliant performances. Further than balls deep. Beard or not. Or maybe it was that scene with the hooligans who pass Cruise on the street and call him a faggot. (I bet those guys are STILL eating out on that.) One time too many to simply flash the frozen smile and laugh it off?

The movie’s opening scene is a harbinger of the territory it intends to tread: Harford, chatting to his wife Alice, walks into the bathroom where she sits on the toilet in a long, high-slit ballgown; she wipes herself with toilet paper and throws it away, chatting back nonchalantly. So innocuous, so sexy, so dirty (and all I could think of as she slinked through that party was the moist spot on her panties). Close eyes, ride it back down to calm… 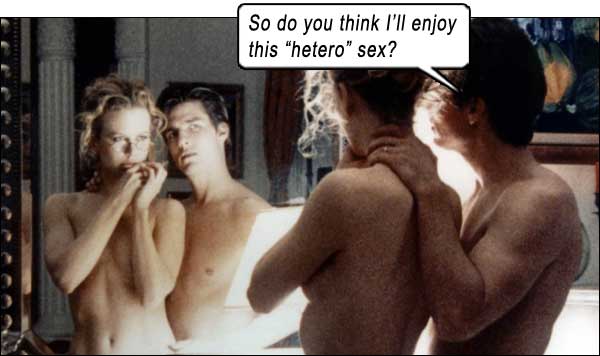 Movie is telling us it will unflinchingly take us through the most private moments of this couple, uncomfortably close.

Written for the screen by Kubrick and Frederic Raphael, from Arthur Schnitzler‘s novel Traumnovelle, EYES WIDE SHUT seems to allude to that old gag, “You think you know someone…” In other words, when entering into marriage, you should supposedly know everything about the other person; the plan is – with eyes wide open. But is that ever possible in a species that cannot read each others’ thoughts?

Kubrick’s characteristic disturbing directorial style leaves us as disoriented as the lead character. As Harford’s morals are warring within him, colors seem to fight with each other in his scenes – oranges and deep blues, ambers and ceruleans; as Harford stalks the New York sidewalk lathering himself into lust, the camera leads, then follows, moving eerily, as adrift as he is; as the couple speak in unloving tones in their marriage bedroom, the harsh lighting frays our corneas; when Harford tries to hire a cloak and mask costume, the lewd tableau he walks into (with Leelee Sobieski, Rade Sherbedgia and some Asian men) is disturbing for what it DOESN’T reveal.

The password: Fidelio. The expressionless gold mask. The taxi ride to the orgy mansion: nowhere. The single repeated piano note: pling… pling… pling…The ritual: the tribades, letting cloaks fall to reveal their naked perfection (“But I say unto you, That whosoever looketh on a woman to lust after her hath committed adultery with her already in his heart.” – King James Bible. Sorry, Christians – you’re all going to hell!). The warning: leave. The sex: watching, performing, feigning disinterest, but it’s the focal point of existence. The cameo: Sydney Pollack?! The murder: identifying the sappho who warned him. The bonus: Nicole Kidman wearing nothing but reading glasses.

In the United States, EYES WIDE SHUT is rated NC-17 (that’s the poop-your-pants, highest, deadliest rating a movie can get, without being porn), not because of its disturbing themes but because it shows people engaging in the life-creating practice of sex. Censors would much rather you drank in the death-creating practice of murder. Heaven forbid we show our kids how to make love; let’s show them how to kill, and then we’ll blame Judas Priest for the school shootings. A movie filled brim to end with murder can only manage an R-rating in the United States. What does that say about the hypocritical, gutless, inconsistent, wrong-headed, wrong-prioritied American censors?

That they’re nothing but a bunch of TITS.