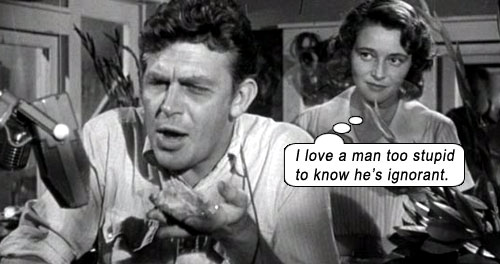 He went from being a radio personality to a TV superstar, with his hate-speak and political lies, ultimately driving the course of political movements with his disinformation, empty rhetoric, and outright falsehoods, until he was brought down when his redneck public discerned his ultimate snake-oil shallowness. If you think I’m talking about Glenn Beck, I am. It’s also the story of Larry “Lonesome” Rhodes in A FACE IN THE CROWD.

Political monolith Keith Olbermann piqued my interest in this movie by constantly referring to asinine political commentator Glenn Beck as Lonesome Rhodes Beck. Olbermann would occasionally cite the movie from whence he drew the analogy.

In this 1957 film, written presciently by Bud Schulberg and directed kinetically by Elia Kazan, Andy Griffith is Larry Rhodes – a Brando-esque titan from his first seconds onscreen. You heard me: this is not the Andy Griffith from Mayberry NC whom everybody loves for his suffocating kindness and goodness. Rhodes is a rough-hewn black diamond that Griffith carved from battery acid and demon seed long before Opie and Barney and Aunt Bee turned him into, well, Andy Griffith.

Rhodes is discovered sleeping it off in a small-town jailhouse by Marcia Jeffries (Patricia Neal), searching for a human interest story for her radio show. (This was back when a good-looking woman with cheekbones like Optimus Prime and a waist the size of a wrist could roam amongst the perps in a jail cell with no fear of being ass-raped. Maybe in Mayberry…) Marcia is so taken with the self-aggrandizing, lusty redneck drifter Rhodes, she commissions him for her radio show, “A Face In The Crowd,” letting him be as loudmouth, ribald, passionate and charming as all get-out. And the ratings create a monster…

At first it’s all catchy songs and down-home stories. Rhodes: “I put my whole self into everything I do!” His rise to fame is meteoric: a ship is named after him, a mountain, awards, until he’s bigger than the Beatles who were bigger than Jesus. After he starts believing his own myth, he starts exploiting his power: “I’m not just an entertainer – I’m an influence, a wielder of opinions, a force!”… “My flock of sheep, rednecks, crackers, hillbillies, housefraus, shutins, pea-pickers; everybody that’s got to jump when somebody else blows the whistle – they’re even more stupid than I am, so I got a thing for ’em…” Lonesome’s hubris, coupled with his inborn ignorance, would be his downfall. See Glenn Beck. 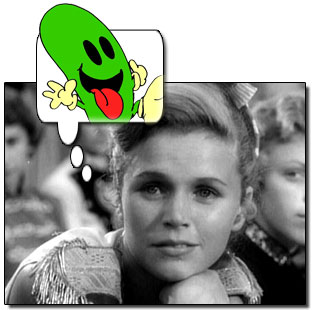 Walter Matthau is newspaperman Mel, a conscience whom Marcia desperately needs when her reality slips under the cogs of Lonesome. Lee Remick, her eyes like diamonds aglow, is the most beautiful girl in the world at this point in time, and a teen fling for Lonesome.

Was director Kazan the man responsible for bringing out such feral energy in Griffith, as he did with Brando in A STREETCAR NAMED DESIRE (1951) and ON THE WATERFRONT (1954), and as he did with James Dean in EAST OF EDEN (1955)? He makes Griffith’s Lonesome a despicable character; we never take to him as a once-innocent soul now corrupted – we can smell the shit he’s shoveling from his first seconds onscreen. (And he even gets his “Stella!” moment, crying “Marsha! Marsha!” from the top of the stairs rather than the bottom, and in a very different context than Brando.)

In this parable that presages NETWORK (1976) by two decades, they speak of politics becoming entertainment, we see the pitfalls of demagoguery, and Republicans still trying to cut social security and unemployment benefits! It is disturbing to see the venality in marketing that we thought only arrived with modern capitalism: boosting sales of the placebo Vitajex by changing its color from white to yellow (“the color of sunshine”). And we shudder at the oligarchic politicians supposedly in a democracy, who buy Lonesome for a dollar and a compliment: “Television is a wielder of opinion, an institution positively sacred to this country, like the Washington Monument… Every strong, healthy society from the Egyptians on, the mass had to be guided with a strong hand by a responsible elite. In TV, we have the greatest instrument of mass persuasion in the history of the world!”

Holding up across time, this movie even captures that “modern” tripup of dignitaries and trashy celebs alike – the “off-mic” moment: when public personas think they are “off microphone” but somewhere, a mic is picking up their every word and – more damningly – their contempt for their audience. (Obama’s “I’ll have more leverage in my second term” that revealed the man had hubris after all; Romney’s “47% of Americans are freeloaders” that lost him a presidency.)

The film is also intrinsically racist in all those subtle ways that we forget are racism for their accepted ubiquity: The owner of a radio station has a black man polishing his shoes near his desk as he listens to Lonesome; owner scruffs the black man’s hair, “You like him?” “Yessuh ah do!” Look at the dominant-subjugated positioning of these two; look at the infantilizing attitude of the white guy. That black guy might as well be a slave – he might actually BE a slave! In real life!

Matthau gives a prescient eulogy of Lonesome’s career, that describes the arc of most ideologues; it is not black and white, not winning or losing outright, but a slow death over a spit, “You’ll be back with a show -probably not top 5 or 10 – some people will remember, some won’t…”