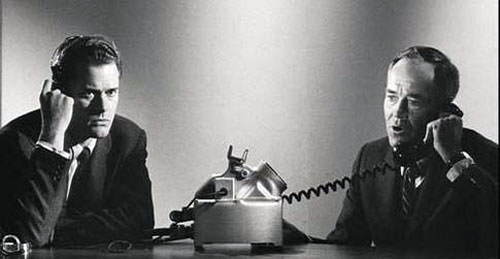 ”Hello, prop department? Could you remove this I DREAM OF JEANNIE background? Larry’s losing focus again.”

Released in September 1964, only a few months after Stanley Kubrick’s DR. STRANGELOVE (Jan 1964), Sidney Lumet’s FAIL-SAFE would quite understandably be accused of plagiarizing that movie’s plot (of an international war crisis set in motion by deploying bombers and being unable to recall them – STRANGELOVE even mentions “fail-safe points”), but these two movies employ very different tones; STRANGELOVE is a satire, with laugh-out-loud moments of insanity, while FAIL-SAFE goes the route of just plain insanity.

The “fail-safe point” refers to the farthest point towards the Soviet Union an American bomber can reach before turning back – unless given a direct order to attack. At Strategic Air Command, General Bogan (Frank Overton) explains proudly to a visiting congressman (Sorrell Booke, so young and skinny, we’d never believe he’d go on to become Boss Hogg) how the computer’s many checks and counter-checks would stop matters getting worse should the fail-safe point be breached. Of course, the irony is that these exact protocols designed to be fail-safe, are the very mechanisms that make matters worse.

The best line in the movie comes after Bogan boasts of the “fail-safe” mechanisms, and Boss Hogg asks, “But who checks the checkers?” and an officer answers, “No one,” while Bogan simultaneously answers, “The president.” After stepping on each other’s lines, the two men exchange a frazzled look, and congressman Hogg knows them Duke boys are up to no good again.

In the war room, bracing, intelligent discussion over the opposing ideologies of war; “true” war – as opposed to “profiteering” war (the Dick Cheney model) – between pacifist General Black (Dan O’Herlihy, who would become the CEO in ROBOCOP) and war theorist Groeteschele (Walter Matthau, playing the George C. Scott role from STRANGELOVE; though the Scott role was comedic, and though Matthau is a renowned comedian, Matthau here is scathing in his academic cynicism). From the novel by Eugene Burdick and Harvey Wheeler, both sides of the argument are given equal shrift; the purposes of war, the benefits, death tolls, escalation, ceasing, politics, psychology… And it’s amazing how screenwriter Walter Bernstein captured both sides without a trace of bias; each character committed to their roles to the bitter end, which was coming soon in the form of a computer snafu…

While changing a faulty bulb at HQ, the computer inadvertently sends an authorized order to the bomber squadron Group Six – to breach their fail-safe boundaries and bomb Moscow! And no counter-checks can recall them, due to protocol, i.e. any counter-order is construed as being coerced by the enemy.

Enter President Henry Fonda, with lapdog translator Larry Hagman in tow, so young his nappies were full by the end of this intense dialogue-driven thriller. Fonda has some ‘splainin’ to do, on the phone to the premier of the Soviet Union. He beseeches understanding, forgiveness, and promises to help the Russians shoot down his own American bomber squadron!

Though the computer graphics on the radar screens are rudimentary, they yet convey the helpless horror of watching a computer program spiral out of control. Dragging humans into the terrifying consequences. Action scenes of planes are played as stock footage, in silence. And they rock us as solidly as any Michael Bay swooping pan of Corsairs piloted by teen dreams.

At every stage of the game, Fonda keeps asking, “Is it possible?…Is it possible?” sounding like his stalwart character from 12 ANGRY MEN (which Lumet directed in 1957).

Then Groeteschele realizes America could exploit the error, “Let the Russians think the bombers are going to bomb them – and they’ll surrender.” What happens when the bombs drop? He’s got a theoretical solution to that too, “Then we win.” (This too is similar – nay, exactly – what Matthau’s analog, George C. Scott, proposes in STRANGELOVE.)

America sends fighter planes to shoot down their own bombers! But the fighters only have limited fuel and expend their payloads while falling one by one into the ocean. The fact that Americans are portrayed as premeditatively sacrificing their own men to destroy their own men is astounding! Something we never see in cinema, and something we’ll never see again, with the Gutless MPAA and the specter of 9-11 et al. At that point, this movie could get no better. And then it does…

The strategy that elevates this movie to classic status, the move by the president of the United States that would never be considered in these modern times, let alone written and performed in an American movie: President Fonda, his gritted teeth biting into his damned soul, promises the Russian premier that if any American planes get through the Russian defense and bomb Moscow, to prove his sincerity, he would order an American bomber to bomb New York!

FAIL-SAFE is terrifying. Because it’s about the modern American administration. Now I’m no 9-11 truther, but bear with me on some wild speculation… and look at the New York attacks on September 11, 2001 through the prism of this movie… something for something… a deal made between leaders that we’ll never know about… a leader deposed… in return for?…

Absolutely compelling to the last frame, FAIL-SAFE will turn all your dreams of a safe and secure country into nightmares.