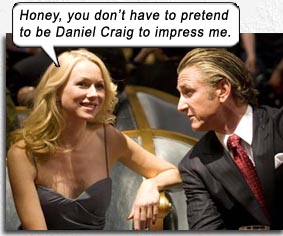 FAIR GAME is the movie that tells the low down dirty story that resulted from Dirt Piggy’s threat. Sean Penn plays U.S. Ambassador Joe Wilson and Naomi Watts plays his undercover CIA wife Valerie Plame. It may seem flighty bringing such a significant treasonous felony to light through a movie (rather than a documentary), yet FAIR GAME succeeds at being a weighty and yet entertaining treatise on how the George W. Bush administration abrogated its oath by willfully exposing one of its own undercover CIA agents.

Dirt Piggy’s statement was a hubristic admission that the vile Bush Klan were going to commit a felony (expose Valerie Plame’s identity) – to distract from another felony (prosecuting an illegal war on the basis of a lie). Yet none of the Klan is behind bars. Not Bush, Cheney, Libby, Rove, Addington, Woo, Rice, Ashcroft, Powell… Is that what they mean by “land of the free”? That even crimes worse than Watergate (as their felonies came to be rightfully termed) do not warrant incarceration?

Bush-Cheney et al chose to endanger the United States by “leaking” Plame’s identity not for national security, not because she was a threat, not to aid the fake “war on terror,” but for the pettiest of reasons – revenge. Because they couldn’t let her husband, Ambassador Joe Wilson, keep running around the country telling the truth about their lies.

You see, at the request of the Bush government, Joe Wilson visited Niger in February 2002 to discern whether they were transporting WMD materials for Iraq. Despite his reports on zero activity, the Bush Klan went ahead and conflated their lie of WMD (which included the infamous 16 words in Bush’s State of the Union speech) to sell their war to the braindead American public. This led Joe to righteously retaliate by writing an op-ed: “What I Didn’t Find In Africa.” (New York Times, July 2003.)

Now like any good dictatorship, the Bush Klan couldn’t have insurrectionists contravening their fake world view, so to discredit him, they outed his wife. And still remain free.

“The terrorists” are still winning.

Doug Liman directed the spy thriller THE BOURNE IDENTITY – he directs FAIR GAME from the same cloth, without the aikido. Definitely a Truth-Is-Stranger-Than-Fiction tale, lifted from the books The Politics of Truth by Joe Wilson and Fair Game: My Life as a Spy, My Betrayal by the White House by Valerie Plame (screenplayed by Jez Butterworth and John-Henry Butterworth), film moves at a lightning pace, yet its 108 minutes comes nowhere near encapsulating the depth of corruption of the Bush administration.

We only meet two of the key government players as actors – Adam LeFevre as Dirt Piggy Rove, and David Andrews as the contemptible Lewis I. “Scooter” Libby, who was eventually scapegoated by Cheney – not shown in the movie – to take the fall for the leak, whose jail time was commuted by Bush because Bush knew that with a nickname like Scooter, everyone would be lining up to ride that bitch until the wheels fell off.

Unfortunately, we are subjected to all the rest of the players in real news footage. And you will watch these scum telling their lies upon falsehoods upon realities built by their lies (Bush and his darting weasel eyes, Cheney with his despicable scrunching mouth, Rice with her blank-faced, chipped, soulless delivery) and you will feel that biliousness all over again.

When Libby is interrogating CIA analysts on what they know about the Wilsons, it makes the CIA look like good guys. Sure, up against the reprehensible Libby and the Bush Klan, the CIA look like angels, but let’s remember that the misnomered Central “Intelligence” Agency are themselves a bunch of soulless hyenas who wouldn’t hesitate to torture, falsify information, withhold evidence, or kill on command – enemies or one of their own – for no reason other than “just following orders”; it’s a known fact that Cheney avails himself of CIA “death squads” whenever a sticky situation has to be unglued.

Both Valerie and Joe Wilson were neck deep in government dealings, so were probably not as intrinsically innocent as they are painted. When Valerie is outed, one of her friends asks the question that is on all our minds: “So do you have lovers around the world?” She is deflective and never answers yes or no (and even on the commentary track, the real Valerie Plame studiously avoids this moment in the movie by plastering it over with irrelevant commentary). But come on! A hottie like Plame traveling the world undercover with lives and governments and countries at stake… you think we’re that dumb? Which raises the intriguing questions on how “open” the Wilson’s marriage was/is; he was a world traveler also, had worked for Clinton, had visited the Middle East scores of times and was the “last American to meet Saddam”…

By July 2003, the character assassination was underway, with witless patsy Libby planting the “leak” of Plame’s identity in the newspapers. To corroborate their lies, Cheney “leaks” to the New York Times, then goes on Meet The Press and quotes his own leaked treasonous statements from the New York Times as a reputable news source!

Valerie is stunned into silence, while Joe wants to speak out at every opportunity, battling against the corrupt government itself. It strains their marriage to separation. To demonstrate the wrongness of the Bush-Cheney machine, and why they must not be silent, Joe shouts down Valerie at one point: “If I shout louder than you, am I right, Valerie?! If the White House shouts a million times louder than us, does that make them right?!”

It takes the great Sam Shepard (as Valerie’s father) to convince her to fight back. Movie ends with footage of the real Plame starting her pushback – her testimony to Congress.

When Valerie asks her fellow CIA officers for security to protect her family – there is none. As always, the CIA abandons, betrays, and kills actively or through inaction any operatives it has no more use for. Why would anyone work for people this low and noncommittal? Leaned on by the government (like your average street thug mob enforcers) to abandon the Wilsons, the CIA is as complicit in Valerie Plame’s predicament as the Bush White House. Remember you were feeling sorry for those pricks when Libby was interrogating them? Remember my reminder? Who are the heroes again?

On the DVD Commentary track, Joe Wilson opines that Plame’s outing by the White House was a shot across the bow for other CIA families who would now think twice about going against the government, to avoid their names being dragged through the mud.

Joe speaks to his wife and co-commentator about the W. Administration: “I hate what they did to you to this very day. If they want forgiveness they’ll find it in some other world.”

With such an Orwellian bent (Bush says, “We strive for peace and sometimes peace must be defended” – cut to Baghdad being bombed by the U.S.) it has always been a wonder to me that after their construct of lies, torture, murder and betrayals, you would think that the nefarious Bush Klan would have manufactured another lie that WMD were actually found. But there were apparently too many facts and too many people in the fact-based real world against them. THUS… if it is openly acknowledged that WMD was a LIE – why has no Klan official been prosecuted for it?

If the legal system was truly about Justice, shouldn’t the Bush Klan be fair game?

The infamous statement – lie – from George Weasel Bush’s State Of The Union address, made despite all reports to the contrary:

“The British Government has learned that Saddam Hussein recently sought significant quantities of uranium from Africa.”

What I Didn’t Find In Africa
by Joseph C. Wilson 4th