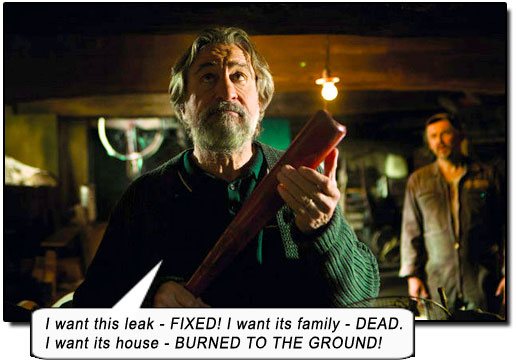 An American mobster in the Witness Protection Program is plopped into the midst of a bucolic French village with his wife and two kids. Cue fish out of water tale, where the fish is a piranha.

THE FAMILY stars Robert DeNiro as Giovanni Manzoni aka Fred Blake, a mafia don who has ratted on his crime syndicate and been relocated to Normandy, France with his immediate family – wife Maggie (Michelle Pfeiffer), daughter Belle (Dianna Agron) and son Warren (John D’Leo).

Tommy Lee Jones is older and crustier than ever as CIA parole officer Stansfield, constantly warning Fred to keep a low profile and not blow his cover. Instead, Fred decides he’d like to write a book (i.e. a tell-all about his mafia exploits) and get involved in the community (i.e. battering a plumber who charges him too much). His family also cause havoc amongst the townsfolk, seemingly all imbued with the “mafia gene,” as they address their societal issues by blowing things up, beating people down and working the angles. Eventually, Fred’s family’s exploits reach the ears of the mafia in the States, and a hit squad is sent to Normandy to whack Fred the rat.

THE FAMILY is directed by Luc Besson, but you’d never guess. Though the direction is artful, the film itself is not edgy, not dangerous, and teeters so close to passé it just scrapes through as light entertainment. And I don’t see how these gags work for people under a certain age, who are not versed in mob-movie legacy. Or has mob ethos osmosed into younger and younger demographics due to our media-saturated culture?

Haven’t we been battered with the trope that old mob habits die hard in ANALYZE THIS and ANALYZE THAT? Same star, same territory, same facial expressions.

This basic romp through well-worn goombah territory would have worked better had the leads been unknowns. As it is, DeNiro playing DeNiro while trying not to play DeNiro is distracting. This is Paul Vitti. This is Jake La Motta. This is Noodles. We know he is invincible, so where’s the tension? When he sets his mind to do something gangster, whether it be evading the feds or strong-arming the council for clean water, we know he’s going to pull it off because – GOODFELLAS, THE GODFATHER II, CASINO… need I go on? (Even the cheeky play on words in the title only works because DeNiro is the star. We get the joke immediately. If we saw unknowns on the poster, would the title have retained any double meaning at all?)

Speaking of winks to the audience, this has got to be the biggest and cheapest: Fred and Stansfield attend a community theater screening of an American film. The French host joyously announces the presence of the resident American writer – Fred – who has consented to kindly comment on the film after the screening. Unfortunately, the scheduled film, Sinatra’s SOME CAME RUNNING (which retains a slight similarity to this very film – Besson’s nod to us as cinema-philes?), was not delivered, but the host assures the expectant crowd they would instead screen another American film… wait for it!…

While Tommy Lee Jones rolls his eyes, the smirk on DeNiro’s face won’t quit; and I think he’s winking at executive producer Martin Scorsese over there.

Big Pussy (Vincent Pastore) is here – as a fat Italian (no surprise), and David Belle, looking like Bruno Kirby in GODFATHER II, is a Parkour hitman.

Meanwhile, Belle the daughter is boring us with subplot. (It took me awhile to realize she is the big-nosed chick in I AM NUMBER FOUR, displaying a lot more spirit here – you know: spiwit, bwavado, a touch of… dewwing do). I don’t know why young girls think they can just accost a guy and the guy will automatically respond. I find Dianna Agron not the least bit attractive, but she accosts the substitute teacher Henri (Oisin Stack) and, luckily for her, he responds… then she expects him to LOVE her (“I gave you my heart!”) and buy a HOUSE for them, and SPEND THE REST OF HIS LIFE WITH HER. Hey Bignose, you offered, I accepted. No one asked you to force yourself on me. Now you’re going to force yourself on me whether I like it or not? That’s love, huh? After Henri breaks it off with a phone call, she puts on a faux wedding dress and proclaims, “I’m going to be with the man I love” (scarier than any horror movie) and is just about to jump off the roof – the only sensible solution for a woman that needy, clingy and desperate – when luckily, the main plot kicks back in as she spies the hitmen coming to kill her father… She knows they’re hitmen because, like us, she recognizes them from all the mob movies they’ve been in.

And the family’s mafia gene comes raging to the fore, as everybody gets in on the dance of killing professional killers. And nothing can take down Fred. Of course! He’s Jimmy Conway. He’s Al Capone. He’s Ace Rothstein. He’s the goddam GODFATHER!

Next – THE FAMILY II: GREECE, where Bignose will fit right in.