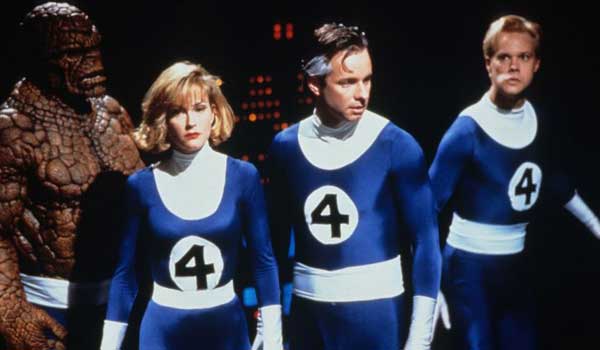 The Fantastic Four — Flame on!!

Four scientist friends are bathed in the rays of a meteor and attain fantastic powers, none of which was the power to say no to appearing in this dungheap film.

FANTASTIC FOUR is a contractual mishap, hurriedly made so that Constantin Film could retain the rights to the Fantastic Four comicbook characters from Marvel Comics. Marvel, in an attempt to quash the release of this lackluster film (which would sully the reputation of their first ever supergroup, created in 1961), bought all the prints, but not before someone pirated some VHS copies. This film was never viewed in a cinema. If you ever chance to see it – that’s a pirated copy!

Reed Richards (Alex Hyde-White) and Victor Von Doom (Joseph Culp) are college science pals, who intend to harness the power of a passing meteor called Colossus, with a big science-y machine that they strap themselves into. Of course, in a movie this low-budget, the meteor doesn’t pass overhead like a regular ole meteor (i.e. uneventfully) – the filmmakers overcompensate and make the whole sky light up like there’s a police car above the crowd flashing its roof lights.

Colossus returns. This time, Reed plans to fly to the meteor in a shuttle, and enlists the aid of his big football buddy Ben Grimm (Michael Bailey Smith), and two siblings, Johnny Storm (Jay Underwood) and Susan Storm (Rebecca Staab). Johnny is athletic and upbeat and I want to slap him, while Susan is a plain blonde, whom we are meant to believe is a knockout by the way Reed makes molester eyes at her.

To cut a long, boring story short, they all get irradiated by Colossus and crash land – with strange new powers: Johnny can conjure fire, Reed can stretch his body, Susan can turn invisible (and her clothes can too! This is not the age when you can have a woman walking around nekkid onscreen – even if she IS invisible), and Ben turns into an orange rock Thing. (The Thing’s pebbly body-suit was apparently the most expensive item in the film, so I guess that’s why they changed the actor inside it – stuntman Carl Ciarfalio was a head shorter than Michael Bailey Smith, and even though he looked like a Teenage Mutant Ninja Turtle, he probably saved the studio a few pennies on costume budget.)

Writers Craig J. Nevius and Kevin Rock actually try to keep as much canon as possible, with the blue and white suit designs, Ben’s blind girlfriend, Alicia Masters (Kat Green), Doctor Doom’s green cape and breathmask, and the irritable familial dynamic between the four. Though they never really let Johnny become a full “Human Torch” until the very end, in a stunningly inept special effect, they let Thing blurt his signature warcry at least three times, “It’s clobberin’ time!” Is it too obvious to say that Johnny’s catchphrase, “Flame on!” is said with way too much gusto for this supposedly heterosexual guy.

The four are taken to a military facility, specifically to explain and showcase their powers to the audience. Ben escapes and wanders the streets, bitter. Of the four, he is the only one who is not amazed and/or happy with his situation. Maybe it’s the stone penis. Just a guess. 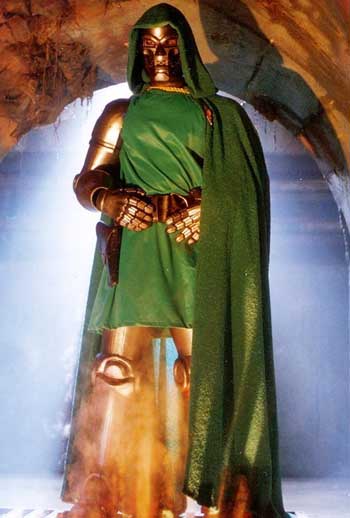 “Does this dress make me look fat?”

Meanwhile, in darkened scenes, we see the Russians groveling before the steel-masked Doom and calling him “Your Highness.”

Reed comes up with psychological reasons why each got the powers they did: “Sue has always been shy, so she now turns invisible; Johnny has always been hot-headed; Ben always relied on strength”; and Reed himself, well, he always tried to “stretch himself too thin to do too much”… I dunno, that explanation seems a bit thin, Reed…

Sue names the group (“We are the Fantastic Four – remember?!”) and stitches their gay-ass costumes (screaming blue with white piping – but apparently not having enough material left for Thing’s costume, which consists of only a screaming blue bikini bottom and no body covering), just in time to meet Doctor Doom, who sends in his soldiers to machine-gun the team.

The Fantastic Four escape of course, and then Doom comes in laughing, starting a sentence, “Ha ha! So my friends–” and stops when he sees all his goons knocked out and the Four have escaped. So you mean he ordered them gunned down, then came in laughing to discuss – what? Their last rites? Whether they want to give up? How much the bullets hurt? … What IDIOT thought this was a good way for Doom to enter? Maybe Oley Sassone, video director, hired to direct this feature film because he was cheap, and the point of this exercise wasn’t to produce a fantastic film but to keep the Fantastic Marvel license. Or maybe it was producer Roger Corman. ‘Nuff said.

The acting is surprisingly above-mediocre, considering the production values are zero, and the soundtrack by David Wurst and Eric Wurst sounds oddly like JURASSIC PARK.

The action is sporadic and poorly-directed: Even though Susan has a force-shield power, her main tactic is to hope that two guys run at her from opposite directions, so that she can turn invisible and have them crash into each other. And Reed’s stretching really serves hardly any purpose in a fight. Only Johnny’s firestorm and Ben’s powerful rock lobster are worth their weight in orange.

A final confrontation with Doom finds Doom falling to his death. Or did he?

Reed and Susan get married in their superhero suits, making it look like a gay wedding between Reed and Johnny. At the wedding, Thing wears nothing but his screaming blue bikini bottom, and Johnny misses the perfect opportunity to yell, “Flame on!”