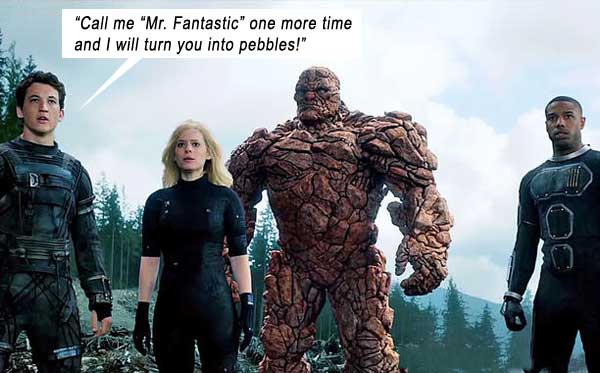 I honestly don’t see the problem with the maligned 2015 reboot FANTASTIC FOUR, the dark rendition of Marvel’s longest-running superhero team (first published 1961). Good acting, strong themes (involving family, alienation and teamwork), and an eerie discomfiture surrounding the unearthly “powers” of the protagonists, rather than blind, childish, do-gooder acceptance. And featuring the barbecue-rib guy from HOUSE OF CARDS! This movie has everything!

Four young scientists open a gateway to another dimension via a teleporter, and are contaminated by the glowing goop they find there. With the most morose of their team lost to the goop, three of them return, exploding back into this dimension, and into the face of their female cohort, who is then also affected. (Isn’t that how cooties works?)

The infected four must adapt to their physical anomalies, with the American military fulfilling its usual boneheaded purpose of trying to weaponize each of them.

Miles Teller is physics genius Reed Richards, nominal leader of the young scientists; Kate Mara is brainy love interest Sue Storm; incredible thespian Michael B. Jordan is Sue’s reckless half-brother, Johnny Storm; Jamie Bell is Reed’s buds from college, Ben Grimm; and Toby Kebbell (so entertaining as Agenor in WRATH OF THE TITANS) is Victor Von Doom from Latveria. (We know he’s from Latveria because that happens to be the most pertinent information on his dossier apparently, in bold letters directly under his name. Yes, that’s exactly the type of information most needed about young scientists – their place of birth. This stupid labeling came about because of the studio contention on whether to call Victor “Von Doom” because it sounded too dated and cheesy 60’s-comix, so the filmmakers changed his character name initially – until fan uproar made them change it back. But in one last impotent flourish, the filmmakers sought to mitigate how melodramatic the name sounds by making it quite obvious he’s from another country. You know, where cheesy 60’s-comix names are common. Fucking idiots!)

FANTASTIC FOUR is no more or less silly, spectacular, inspiring or cookie-cutter than any other superhero movie out there today. It has its idiotic plot point faults – such as using the teleporter without anyone in the facility noticing, and its sudden bombastic climax which completely loses the tone of the movie – but it is most impressive in the way director/co-writer Josh Trank and co-writers Simon Kinberg and Jeremy Slater create realistic reactions to “superpowers.”

We take the word “superpower” for granted in this age of Blockbuster Superhero Blimptacular Crapticular Tentpole Summer Movie Extravashitstormia, but insert any extreme physical anomaly intrusively and suddenly into the real world, and your first reaction would not be to save a child’s life or stop a bank robbery, but probably just to… scream. (Director Trank actually explored this exact theme in his last film, CHRONICLE (2012), about three friends gaining super powers and dealing with them realistically – which also starred a young Michael B. Jordan – hmm, do I sense a Scorcese-De Niro Marvel Team-Up?)

When the teleporter crashes back into this dimension, Reed finds himself trapped under a girder, which he cannot move off him. He hears Ben screaming for help and crawls toward him. Only his torso is in shot through the smoking rubble, as he painfully drags his body along the ground. When he looks back, he sees his legs have not been freed from under the girder, but are rather “stretched out” along his path. His face contorts in pure horror. He faints.

When we see Ben as an orange rock-thing in his cell, his arm is fused to his body and he painfully extricates it. Gravel dust is shaken loose with his exertions. It’s a sad, terrifying ordeal. When Reed asks him about his condition later, “Does it hurt?” Ben replies, “I’m used to it.” Sue drops in and out of visibility, and Johnny is aflame, constantly burning inexplicably… Franklin, though father to Johnny and adopted Sue, considers all the young scientists his “children,” and butts heads with the military over their fate and cure; when he sees Johnny aflame on a table, his face is a mask of suffering, living the pain of his son.

We can see the confusion and horror in all these characters as they try to manage their abilities, especially Reed, whose stretching and reshaping is seen as a constant painful struggle of will. Johnny’s fire is also about will, and as he learns his control, he embraces a newfound independence; he is the only one to call the abilities “powers” while Sue calls them “aggressively abnormal physical conditions.” There is a subplot of the father-son rift between he and Franklin, which threatens to subsume the superhero story due to Michael B. Jordan’s magnificence.

While the government spook (Tim Blake Nelson) opines: “They are dangerous and powerful, which makes them extremely valuable to the guys who run this place.” 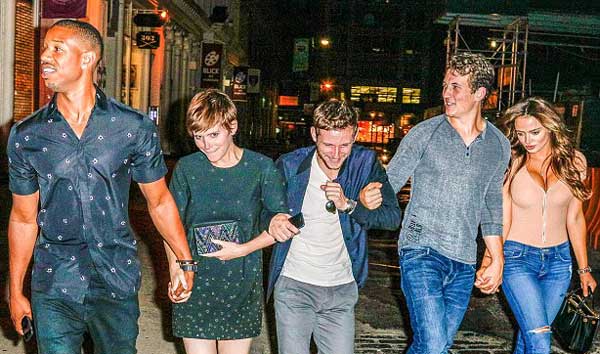 No one is given any “superhero names” like Invisible Girl or – heaven forbid – Mr. Fantastic [snigger]. And the “Thing” – due to his rock condition – does not wear any spandex undies. He just gads about naked; he’s just rock hard down there. They don’t even come up with a “team name” until the very end and try ever so hard not to sound corny as hell. For the Fantastic Four in film, this tone has never been adopted before – alien elements intruding upon a dour reality – and it makes this movie an entertaining fantasy, if we drop our expectations for it to be a DARK KNIGHT or AVENGERS.

The tone and character reactions override the prosaic plot of Victor returning from the other dimension and wanting to destroy Earth to preserve the environment – HIS dimension’s environment! Doom (who is visualized very creatively, with his atmosphere suit having melded to his skin) is inextricably linked with the other four, due to their powers’ origins, yet he psychologically turned in another direction, and I think the filmmakers missed the opportunity to exploit the trope of the heroes and villain being two sides of the same damaged coin.

The vitriol aimed at this film makes me wonder if fans remember that the last filmic incarnation of this team was, in fact, dogshit. Blank-faced Ioan Gruffudd and blanker-brained Jessica Alba as the two main protagonists, with Captain America smug-acting as the Human Torch and Michael Chiklis making a fool of himself wearing disco pants over his naked orangeness. You remember that, dummies? How can you compare the snide childishness of those films with the somber darkness of this one?

Dark not just thematically, but literally. I mean, is Johnny Storm black because they’re saying he’s… burnt? (Is that racist?) As strange as it is to see a well-known character’s race changed, they could not have done better than casting Jordan, who totally wipes our minds of the image of Human Torch as Apple Pie White. In this respect, depending on the level of gravitas an actor might bring, the filmmakers could’ve changed anyone! How about an African-American Thing? Then Orange would be the new Black. (Now that’s definitely racist… hang on, I think the pc police are banging on my door…)

Matter can neither be created nor destroyed. Nor nerd-gasmed.

This First Law of Thermodynamics means no new matter or energy can appear anywhere in the universe, nor can any matter or energy be annihilated from this universe. The teleporter in FANTASTIC FOUR travels to another dimension, which effectively means it is leaving our universe. But how is it going and returning without displacing anything?

When it disappears – i.e. displaces its matter – other matter should RUSH TO FILL THE SPACE IT VACATED in this universe. That is what would theoretically make the universe implode upon itself. Within a nano-nanosecond, the whole universe would rush to fill voids created constantly by itself rushing to fill the void of the original matter. Before thought signals can electrically send the messages to your brain that you’ve destroyed existence, existence would be destroyed.

The concept of “destroying the universe” is mentioned briefly by one of the characters, but that’s in the finale when Doom creates a portal to drag Earth into his dimension (Lord knows why – to copy the plot of other films like AVENGERS or TRANSFORMERS?). As usual, physics is only adhered to when convenient. Or heaven forbid the audience thinks the filmmakers are nerds. At one point, the teleporter returns from the other dimension, and brings with it a shockwave that wipes out the city’s electricity. At least that’s a start toward understanding the implications – as matter is suddenly shoved into our spacetime and other matter must move outwards to accommodate it. But most of the time, the filmmakers display zero understanding of their teleporter’s ability to destroy the universe, as it continues to come and go without the universe even sustaining a small cut on its knee.

Superhero tales have become the folk tales, the Grimm’s fairy tales of this generation. They keep being retold in different permutations. Like all fantasies that revolve around a moral center (Robin Hood, Aesop’s Fables, The King James Bible), they have entered the cultural consciousness and we have stopped questioning their veracity. We barely blink when a super being arrives from another world, when a freak accident causes a woman to become telekinetic, or allows a man to control fire; we yawn when a mutated gene allows for teleportation or superspeed or growing back limbs. Superhero tales – like the agrarian moral tales of old – have become the cultural benchmarks of our age, like the Rapunzels, Snow Whites, Pinocchios, and Peter Pans of a past age. The old tales (Hansel and Gretel, Red Riding Hood, Jack and the Beanstalk, et al) will fade against the might of media employed to promulgate these new age fairy tales.

This tale of the Fantastic Four might have been unsuccessful, commercially and critically, but it subliminally draws on the age-old concept of Earth, Fire, Air (the telekinetic, invisible Sue), and Water (the flowing lines of Reed’s stretchiness), so joins the pantheon of elemental tales, universal tropes that add to the synergy of superhero moral lessons in place of the old fantastical tales.