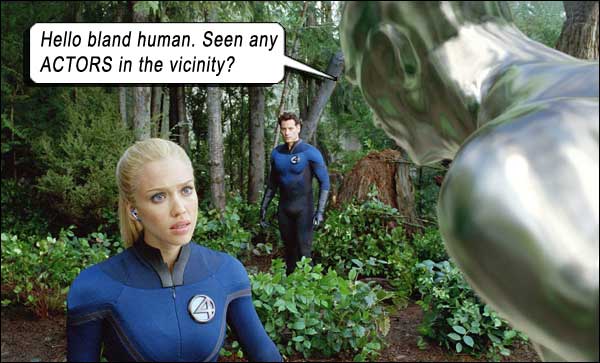 There’s something about the Fantastic Four that’s not all that fantastic: it’s called acting.Had to spin Joe Satriani’s Surfing with the Alien before spanking this review – ‘twas the only way I was gonna cyber-charge the cells after watching the soporific, yet tenuously linked FANTASTIC FOUR: RISE OF THE SILVER SURFER. As some of you 80s steel-belted wardogs know, Surfing was Satriani’s 1987 horse-powered second album and kick in the nuts to the gods of guitar, featuring none other than Marvel Comic’s Silver Surfer on its cover.

In RISE, the principal cast returns from FANTASTIC FOUR (2005), and promptly continues doing what they did in the previous film: not act – Ioan Gruffudd (stretching a premise as Mr. Fantastic/Reed Richards), Jessica Alba (out-acted by her bra again as Invisible Girl/Sue Storm), Chris Evans (flamed by his CGI alter-ego, Human Torch/Johnny Storm) and Michael Chiklis (supposedly a rock, but indiscernible from wood, as Thing/Ben Grimm).

Like the title track on Satriani’s album, director Tim Story’s RISE is a blistering juggernaut, a sliding, gliding tour de force of kineticism, with the Silver Surfer himself the coolest, droolest, saboteur provocateur this side of Darth Vader (Doug Jones embodying Surfer’s glittering form and Larry Fishburne dropping his Morpheus on Silvie’s vocals); an interplanetary herald of destruction sent by Galactus, the consumer of worlds…

The set pieces (the Thames emptying near the London Eye, the Surfer’s chase sequences, cosmic clouds clawing their way around Earth) are massive spectacles which should keep the 12-year-old contingent happy, but writers Don Payne, Mark Frost and John Turman, though trying hard to put emotional ‘nads on the script, are subsumed by the summer stupidity of the director.

The ice-veined Surfer’s dark origins and darker purpose are given short shrift (he’s from a planet which will be consumed by an entity called Galactus, who only holds off on eating Surfer’s planet planet because Surfer has promised to seek out other planets for Glaactus to eat); what could have been epic and disturbing and morally circumspect is handled with gloved thumbs by director Story and egregious so-called performances by the egregious so-called actors.

The Surfer himself, though, stands above and beyond any puerile human morality or notion of thespianism – in every sense, he’s UN-REAL!

With all that queuing for the first iPhones, seems Reed Richards had one before anyone, as it constantly rings at his paparazzi-laden nuptials, alerts him to radiation levels, breaks up his wedding, connects to the internet AND does half his acting for him; while his bride-to-be, Sue Storm, assumes her dream-killing role and starts bitching about “leading a normal life” and eschewing their tight-suited superhero roles before Reed has even had time to wipe the bachelor party stripper lipstick off his tool. (Pachelbel’s Canon in D at their wedding, a perfect indicator of how sickly mediocre their married life was aiming.)

And Reed’s just the type of pussy to give in to her, to the chagrin of Torch and Thing. But this subplot is quickly forgotten when the Silver Surfer rides by with no clothes on and everything starts getting pear shaped.

The army deploy the Four to capture the Surfer and Reed gets his intelligentsia on when he retorts to General Hager (Andre Braugher) that even though he was raised as a geek and not a quarterback, he’s still rich, famous and marrying “the hottest woman on Earth,” whereupon Jessica Alba’s dumb ugly head grows larger than the Thing’s thing. Chalk up one for the nerd patrol, but did he have to be such a nerd about it? 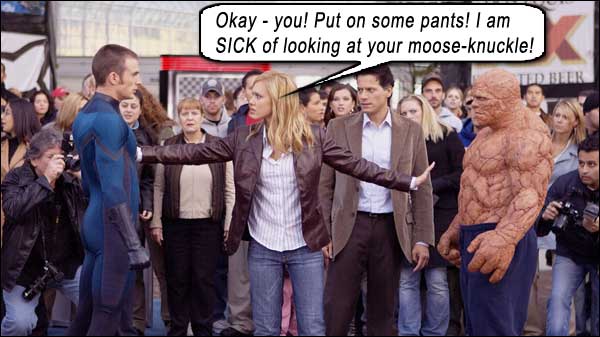 Earth is next on the menu for Galactus, who has employed the Surfer to drill holes in the Earth almost as big as Jessica Alba’s head, to presumably poke his cosmic fingers into them like a bowling ball and pop us into his mouth like finger food. The Four knock the Surfer off his board (which supplied his limitless power) by using Reed’s waffle maker, whereupon the Army immediately tie Silvie to a table and torture him for no reason – you know, standard Amerikan Military Procedure.

And while Doom makes off with the Surfer’s board, fanboys hold candlelight vigils for the death of authenticity – in Surfer canon, the board had nothing to do with his power. Consult Stan Lee, who was right there playing himself this time, in definitely his best Marvel cameo – but in kicking him out of Reed’s wedding, they did the same thing metaphorically with his creation.

Another track on Surfing With The Alien was Always With Me, Always With You, where Satriani (one of the most lethal gunslingers of the modern age – after Hendrix, and Eddie and Vai blah blah – no time to dispute the merits of axe-worship here) displays the flip side to bombast and bluster – subtlety and taste, something which RISE lacks as much as acting.

While Doom surfs around on his commandeered board (with no discernible method of transferring its power to him except magically through his feet just touching it – because in movies you can do that), firing “bzzz” things from his hands (because we’ve got this special effects budget – we might as well use it) and the Four chase him in a flying bathtub that can split into four little flying bathtubs, Galactus envelops Earth (represented by a cosmic cloud – see Movie Convention Number Twelve-a). And the Silver Surfer – whom we thought was Earth’s enemy – is the only naked shiny thing who can save the day.

It takes teamwork and some thrilling Superhero Posing from Invisible Girl to reclaim Silvie’s board, whereupon she dies from the embarrassing posing and the Surfer Tampers In God’s Domain to bring her back to life – because in movies you… but you get the picture by now, right?..

Surfer dude goes totally tubular surfing directly into Galactus’s cloudy interior and – I dunno, farting or something, which makes Galactus explode in a shockwave that should have thrown Earth out of orbit, but instead just damaged Japan a little, which was fortunately covered by its Godzilla insurance.

Guess you hold the power of a god when you’re Surfing With The Alien. Just ask Joe Satriani… 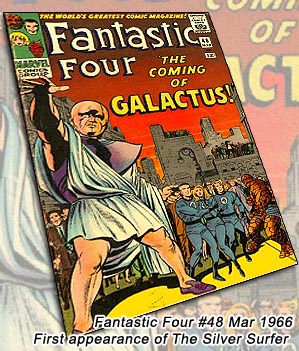