To these guys, the maps ARE the script.

The Faster the Stupider.

Even if the car-porn franchise FAST AND FURIOUS is not your cup of transmission oil, you’ve gotta admit, the movies are some of the best exponents of their gearhead genre.

FAST & FURIOUS 6 reunites Dom Toretto’s gang of gearheads against a Euro mercenary intent on stealing some military McGuffin that would make it easier for despots to blow up the world. No one’s here for the plot details, because the slim story is decorated with startling production values, heady locales, lusty chicks in bikinis exposing ass, muscled men in tourniquet tees exposing bicep, macho engine-belching action sequences, audacious stunts, and enough gear-shifting to blow a transmission six ways to NASCAR.

Retired and lazing in a Spanish villa with toyt blond Elsa Pataky, Dom (Vin Diesel) is coaxed back into the fray of musclecar mayhem by Officer Hobbs (Dwayne Johnson, once again in a role wearing a tourniquet tee two sizes too small). Hobbs baits Dom with his girlfriend Letty (Michelle Rodriguez), whom he thought was dead. On the trail of the mercenary Shaw (Luke Evans, who is so Euro Villain his three-day-growth owns a villa in Italy), Dobbs reveals Letty as alive and driving, as Shaw’s gearstick-man. So Dom leaves the blond in bed and joins forces with the over-roided detective.

Dom’s team is assembled – because it’s a FURIOUS movie and star power and box office – who’re we kidding? Roman (Tyrese Gibson), Han (Sung Kang), his statuesque gal Gisele (Gal Gadot), computer whiz Tej (Ludacris), and last and best three-day-growth, Brian O’Conner (Paul Walker, who is still reminding us every 7 lines of dialogue that he “used to be a cop, you know”).

The movie opened with a desperate car chase between Dom and Brian, two brahs in speed glaring dangerously intent, roaring across Spanish mountains, wildly screeching treacherous bends and, of course, gear-shifting for no reason, and we find out it was a mad dash to the hospital to witness the birth of Brian’s child to luscious Mia (Jordana Brewster). Dom calls after Brian, “When you go through that door, this life is over…”

Until we need you for the plot. 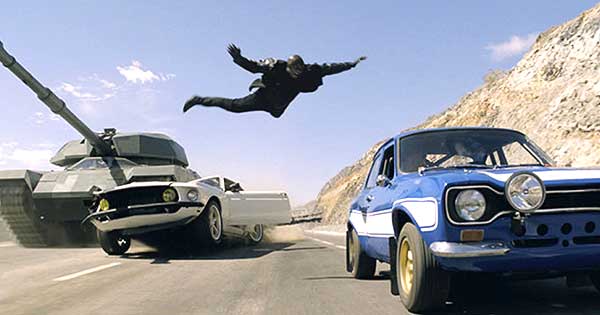 You’ll believe a man can fly… from a tank to a sports car, while the tank barrels over traffic on a freeway, with nobody dying or getting injured.

The cat and mousing begins, as Dom’s drivers track down Shaw’s mercs, and we realize, It ain’t about racing any more. It’s about the villain cars that can flip police cruisers like pancakes; it’s about ramming a tank down a busy highway; it’s about humans careening over precipices in non-physics space; it’s about explosions and tumbling spinning car crashes that no one should be able to walk away from, which everyone walks away from; it’s amnesia driving and double-crosses and racing through the streets of London; it’s lightning-fast subway Krav Maga featuring Judo athlete Joe Taslim; it’s jeeps attacking a military superfortress about to liftoff, and reducing it to a burning bush… But mostly, it’s about brahs. The “family unit” is alluded to ad nauseum, almost as much as Paul Walker brings up the fact he used to be a cop, you know.

Salubrious Gal Gadot has her toughguy moments, presaging her upcoming WONDER years; some scenes alongside real life Muay Thai champion and probable shemale Gina Carano. Michelle Rodriguez, a veteran warrior in all her films,  now looks like she’s battling the miles, when placed alongside the flaming sensuality of Gadot, Pataky and Brewster…

A post-credits scene links the series with THE FAST AND THE FURIOUS: TOKYO DRIFT (F&F3), and introduces the villain for FAST & FURIOUS 7.

The absolute stupidest scene in FURIOUS 6: During a car chase, a mercenary with a specialized gun shoots little magnetic computer chips onto the hoods of Dom’s pursuing brahs. Each chip warms up, another bad guy says The Chip is ready, and then via computer he makes the wheels of the pursuing cars lock up and crash! What a cool scene, exclaim the teenie demo! Firstly, bad guy makes three direct hits onto three car hoods – after shooting blindly at them with a real gun and hitting nothing but pavement (to comply with Movie Protocol of All Bad Guys Can’t Aim). Next, why are they simply locking the wheels? For all the computer tech expense to just lock the wheels, why not spend that money on a rocket launcher, aim it like you did just then, and simply blow up every car immediately? A lot more damage for a lot less money and no expenses on IT guys. Dumbasses! I’m talking to the characters and the filmmakers.

This is what FURIOUS 6 has to do to retain the interests of pimply boys weaned on Grand Theft Auto – ejaculate the action to such hyper levels that we forget the filmmakers (writer Chris Morgan and director Justin Lin) are trying valiantly to insert touching character connections. When he talks to his long-lost lover, Vin Diesel almost shows an emotion on his leathery, underacting baldness; and when they take his wife hostage, Paul Walker almost cracks a “worried” expression. In the end, they are both saved by the fact that he used to be a cop, you know…