Vin Diesel underacts his way through a car-slut thug-fest that loses focus in its last act because – Paul Walker.

What do you think of when someone asks you NOT to think of Paul Walker? Answer: Paul Walker. This is the case in FURIOUS 7, where it is well-known that Walker died during this production in a car accident, and the filmmakers had to complete the movie using a combination of CGI and Walker’s brother as a stand-in. So every time we see Paul Walker onscreen, we find ourselves checking his sightlines to see whether he was actually in the scene or digitally inserted; we find ourselves wondering, Is he real, his brother, or CGI? We realize we are thinking about how to work around his presence in certain shots with cutaways or props or… In essence, we are constantly thinking about Paul Walker – for all the wrong reasons.

And the whole theme of the movie has been skewed to resolve with a “family first” ethos. The plot of Team Furious taking down a villain becomes secondary to Vin Diesel lazily spouting familial platitudes in the final scene.

Diesel is once again Dom Toretto, racing whore turned espionage driver; Paul Walker is Brian O’Conner, established as Dom’s bottom bitch way back in the first FAST AND FURIOUS film in 2001. After all their adventures in nude gear-shifting, Walker’s role here is reduced to pretty-face-middle-background, and their interaction consists of one audacious stunt (both of them in a racecar driving across air between three Dubai skyscrapers), because – I’m guessing they rewrote Walker’s probable deeper involvement due to – yeah, that. 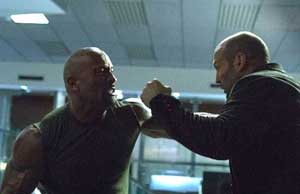 Rock vs Transporter in a battle to the striated deltoid. 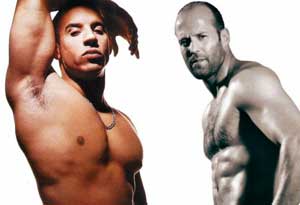 Diesel vs Statham in a battle to– oh, I see Diesel is using the same approach he used on Paul Walker.

Dwayne Johnson returns as Detective Hobbs. On his way back to his desk to write a letter of complaint to the police department for continuing to issue him t-shirts two sizes too small, he finds Deckard Shaw (Jason Statham) at his computer. Deckard is brother to Owen Shaw from the last film (Luke Evans), whom the Furious boyz put in a coma, and for whom Deckard seeks REVENGE. It’s an action fanboy’s wet dream, as this movie has Statham go pec-to-pec with both The Rock and Riddick…

Action Movie Fight ensues, i.e. a fight where two guys beat each other horrifically, including smashing through glass, wood panels, desks, and falling from a 5-storey building, yet only sustain a cut above one eye.

Luckily, The Rock falls onto something soft – a police car – and spends most of the movie in a body cast, yet still able to show off his gargantuan biceps and pecs because of the bimbo demo. It would seem it’s a magic body cast, because when he needs to go help Dom, he just flexes and it falls away cleanly from his bronzed bulk to reveal man-thigh, man-washboard and man-junk.

The rest of the cast reprise their roles as Dom’s Furious Bitches: Tyrese Gibson as The Mouth, Ludacris as The Hacker, Jordana Brewster as Brian’s wife Mia, and Michelle Rodriguez as Letty, Dom’s female love interest (as opposed to Brian, his male love interest), thought dead, now alive, still whining about being dead. But alive enough to kick Ronda Rousey’s ass in a taut-buttocked cameo. Poor Djimon Hounsou also cameos, a spectacular actor once again misused in a role written for a badger.

Kurt Russell appears like Old Snake Plissken, empowering Dom’s gang to recover a surveillance device called God’s Eye, which can see everything in the world. Which would technically make it impossible to get the drop on the person who owns it, right? But get the drop they do – because parachuting cars. 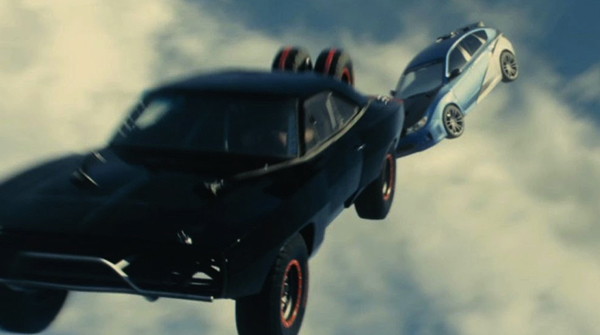 When the flying cars take over the highways, pray Doc Emmett Brown can take us back to a future where Biff is not in charge.

Martial arts expert Tony Jaa cameos and kicks Paul Walker’s ass (which is sad because, you know, he’s dead now; and also sad to think that anyone would believe Paul Walker could hold his own against Tony Jaa). Then Brian runs up the vertical side of a bus falling off a cliff and lands on Letty’s car who just happened to be there.

God’s Eye is somehow related to snagging Deckard Shaw, a villain well-versed in the Bond Method of talking instead of shooting. He continues to appear everywhere our heroes are, with no reason or logic. And continues to not shoot directly at them because that would end the stupidity too fast too furious. It doesn’t have to make sense as long as babes in bikinis are showering in public at race events.

Back to the “family” dynamic, as Mia is pregnant again and doesn’t want to tell husband Brian, because it will tie him down even more, and she knows he misses the action life, i.e. his criminal activity with Dom… Is anybody hearing the poop they’re shoveling? So I guess she’ll just have to wait ‘til she’s really really fat and then tell him? Maybe then he will have reconciled himself to not committing crimes any more and settle down, with all his million dollar heists as his nest egg. Good family planning.

A cameo from that southern drawling dipshit Lucas Black, to tie this movie to TOKYO DRIFT and Han’s death (Sung Kang), which leads to a funeral scene for Han and Gisele (Gal Gadot). Which leads to Tyrese Gibson saying to Paul Walker, “Promise me, Brian, no more funerals.” Has irony ever been this perverse? 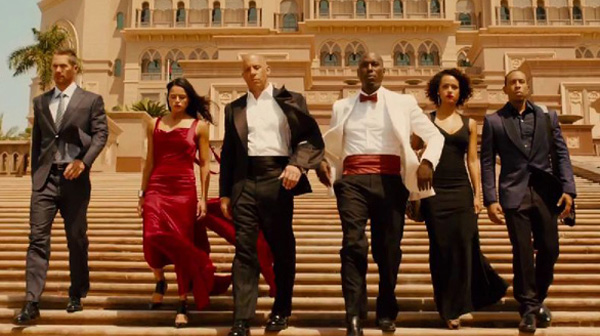 Too Elegant Too Furious

Then it’s Statham versus Diesel in a battle to the overdeveloped trapezius. Meanwhile, Hobbs busts out of hospital with all his armor (which they must have nicely kept by his bedside), and is involved in a climactic helicopter shootout so irretrievably idiotic, the Los Angeles Police Department promised to issue him with the correct size t-shirts if he would just stop making such feeble-minded movies.

The closing scene is as tacky as the stunt scenes were imbecilic. As Diesel narrates family platitudes, Paul Walker (whom we’ve forgotten died during this production because of the massive diversion of the brain-swelling stuntage) is shown driving alongside Diesel on a highway to nowhere. Diesel just left him frolicking on the beach with his wife and kid, and now he’s here alone in his musclecar, smiling over at Diesel. Is he going for smokes? And Diesel was just with Letty and his crew on the beach. Why is he now driving alone, smiling at Paul Walker? Are they going for a quick wank? This admittedly tear-jerking tribute coda is probably responsible for audiences granting FURIOUS 7 more credence than it deserves, but someone dying during production doesn’t make the movie or the actor something extraordinary.

Most people have accepted the fact that FURIOUS movies tread nowhere near reality, yet the illogical plot and story of FURIOUS 7 scales new heights of silliness and fucktardery. And the stunts are the stupidest you will ever see in any action movie – not “so extreme they’re fun,” but rather, so overblown, bombastic and idiotic, it’s a wonder anyone with half a functioning brain would regard this movie “the best of the series,” which is the reputation it seems to hold.

Which shows how many people have less than half a functioning brain.