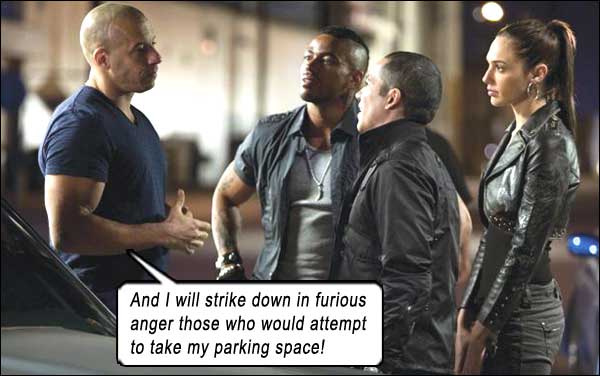 Too Furious To Act.

FAST & FURIOUS is a dark horse in the F&F canon. This 4th film in the franchise is the least involving, as two men go after the same drug lord from different angles – one from the law, one from the street. Filled with pointless vignettes and exhilarating-yet-idiotic street racing, I lost interest as soon as my chicken pot pie was ready.

Movie starts with a heart-stopping robbery of a semi-trailer full of gas by Dom Toretto (Vin Diesel) and his gang of car-thugs. What is this – MAD MAX?! We see Han (Sung Kang) driving alongside Dom (waitaminute! Didn’t he die in the last film? Onward), and Dom’s girl Letty (Michelle Rodriguez) pulling off a daring uncoupling of a trailer before a fantastic crash with Pretty Orange Explosions. F&F4 is not pulling any punches when it comes to action. Or silliness.

We meet detective Brian O’Conner (Paul Walker) in a foot chase, pursuing one of those Mexican dudes that always plays a gangbanger. (Is this Walker’s introduction to Parkour in BRICK MANSIONS?) Cut to generic scene of O’Conner being cussed out by his police superiors for being too pretty to risk his face in a foot chase or something…

After veering into a ditch in the third movie, TOKYO DRIFT, writer Chris Morgan and director Justin Lin steer the franchise back onto the road with this entry, by bringing back our man-crushes (Diesel and Walker) and their attendant hangers-on.

We’re in the Dominican Republic and Dom voices his fears to Letty that it’s getting dangerous and the Man might catch him soon – the theme of the movie. 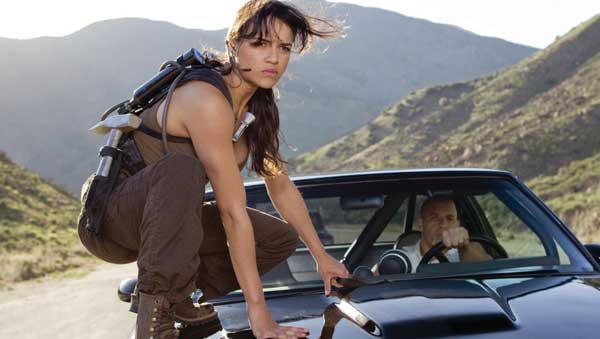 Riding on cars with boys.

Dom gets a call. Letty is dead. Wha-? That was sudden. Very nonchalant kill-off of a major character in the series. No death scene, no background on it, and even when it becomes clear why she died, the sudden vacuum of Letty’s presence seems forced.

Dom examines Letty’s death site and knows who killed her by examining skid marks [dirty comment withheld out of respect for the dead].

While Brian tries to find a drug lord named Braga (John Ortiz), Dom searches for the same Braga, as those were his skid marks at Letty’s death site. See how the plot is bringing the brahs back together?

Brian goes Peeping Tom on Mia (Jordana Brewster, playing Dom’s sister again, and looking too luscious for words), and lunch dates her, telling her how much of an indecisive pussy he is, because he “doesn’t know” why he let Dom go in the first movie. “I lied to you. I lied to Dom. That’s what I do best. That’s why they recruited me” – Wait, are you implying you’re a good actor?! Bwohahahahaha! Look, we all know why you want to stay on Dom’s good side: so that when you fuel-inject Mia, Dom won’t pound you with those brick biceps. 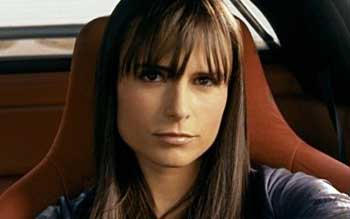 Jordana Brewster: Too Fast Too Glorious

But through a misunderstanding, Brian gets pounded anyway – lucky boy! We can hear bones breaking, but when he walks away, Brian’s pretty face is as flawless as ever.

The key line, which is the basis for Brian’s motivation. Mia tells him, “Maybe you’re not the good guy pretending to be the bad guy. Maybe you’re the bad guy pretending to be the good guy.” This gives Brian license to be Dom’s bottom bitch car-thug in the next three F&F sequels, without any pangs of conscience – for himself or the audience. But there is a flaw to this thinking – because so-called “bad guys” don’t consider themselves bad guys. In their minds, they’re the good guys. Hell, even in this movie, YOU are rooting for the stars, taking it for granted they are “good guys” – but they’re NOT.

The big race meet. Girls in high heels and hardly any clothes, dancing incognizantly to music with different beats for each girl it would seem. Here comes statuesque Gal Gadot as Gisele. She’s Braga’s bottom bitch, who gives her number to Dom because she wants him to pound her like he pounds Brian.

So I guess this is the best way to ferry drugs across the border – roar through the night like assholes with no mufflers at 80 mph in musclecars through decrepit tunnels.

In the contrived conclusion, where Braga is forcibly driven back across the border through the tunnels – even though there is no extradition from Mexico and Brian was out of his jurisdiction but who cares? – Dom rescues Brian’s life (now they’re even again! Such bro love!) and accedes to being caught because “I ain’t running any more.” (In that vernacular, shouldn’t that be, “I ain’t running NO more?”) Whatever. The court system struggles to find an orange jumpsuit two sizes too small for Dom, so that his deltoids will look swoll, and they transport him aboard one of those armored busses that can be flipped over really easily during an escape attempt.

Cliffhanger, as three muscle cars descend on the bus. Dom looks out the window, sees Brian in one of the cars, and gets an erection…