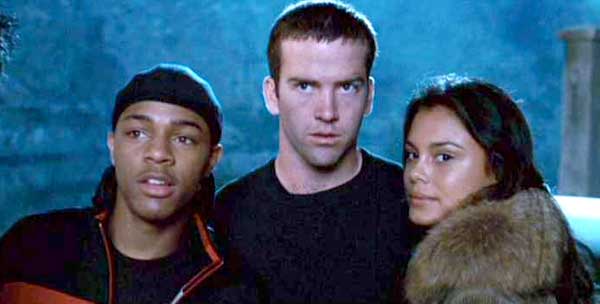 The story is simple and stupid, like its lead character Sean Boswell (Lucas Black, the discount Paul Walker, with zero gravitas and even less acting prowess, with an insufferable southern drawl that reeks of a Bible Belt two-time George W. Bush voter); the villains are cardboard cutouts and the women are nothing but ornaments for the colorful, nitrous-fueled racing machines.

Sean can’t stop street racing, so after his latest crash, his mother sends him to live with his dad (Brian Goodman) in Tokyo. A cop tells Sean, “You’re done! And all before your 18th birthday!” – and milk spurted out my nose. Shyeh royt, Lucas Black is 17. Okay fine.

In his dad’s meager Tokyo apartment, Sean proves what an unlikeable character he is, with no motivation, or thoughts about income or the future, except to race like an idiot. With no redeeming traits, the filmmakers have inexplicably made this plank of dope-wood their leading man, and give us zero reason to root for him; and lord knows Lucas Black has no capability whatsoever to display any emotion or character traits except a petulance when kept from his musclecars and a look on his face like a stripper in front of a calculus equation.

He attends Japanese school (in an ill-fitting uniform that looks like he bashed an actual schoolkid to get it), and stays out late with the kewl kids street racing and pretending to be 17. His dad clashes with him over his late nights, threatening to throw him out, and he taunts, “Go ahead!” His dad clarifies: “You don’t get it! You have nowhere else to go. You’re going to jail.” It doesn’t get through the lump of sewage Sean calls a brain and eventually Sean has to lodge with a racing clique headed by Han (the cool-as-cuke Sung Kang, who reminds us of a young Will Sampson aka Big Chief Bromden). 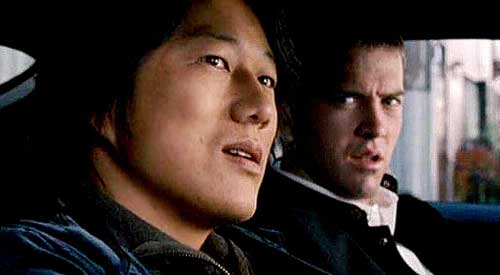 Director: “Okay, Lucas, show us you are totally interested in Han’s backstory; it’s a bonding moment for you both and there’s a sadness that is under your empathy and… ah, just read your lines…”

Sean meets Twinkie (Bow Wow aka Shad Moss), a hustler who angles him into his first Japanese race – against the local hero, DK (Brian Tee).

The Japanese racing style involves “drift,” which is that maneuver where the wheels glide sideways across the asphalt during turns, like a “controlled skid.” Whitebread Sean has never heard of this, let alone raced that way – but it’s the only way you can win a race in the cramped environs of a parking garage. Sean learns this the hard way, in a car that Han lends him. He also learns that DK stands for Drift King. Crashing into every pillar, he also learns his car must be made of Transformer Adamantium or something as it sustains NO DAMAGE. Only when he limps across the finish line a loser does his car suddenly look destroyed. To clarify: all the shots of the car before the finish line – sleek, shiny, undented; the shot at the finish line – car has been sucked through a jet engine.

Subplot of DK’s girl, Neela (Natalie Kelley), giving him “those looks” like she’s already wrapped her panties around his head. She bets herself on the winner, which shows you how far the women’s movement has come. Movie lost me long before the sexism, as Neela is so obviously NOT Japanese, but ambiguously foreign. (Like they set up a white woman amongst the Native Americans for Kevin Costner in DANCES WITH WOLVES.) There is no doubt when camera focuses on her that SHE is Sean’s love interest. It could not possibly be the plain Japanese chick on Han’s crew, or even the bevy of Japanese sluts fawning over him in the clubs – nah, it’s THIS almost-white chick.

Han takes whitebread Sean in because Sean owes him a car (not again! Wasn’t this the bromosexual plot point of THE FAST AND THE FURIOUS?) and puts Sean to work for him as a driver, go-fer and all-round douchebag. Han sure trusts Sean a lot for being a hubristic Yank who lost a race due to his arrogance and whitebread conceit. There is also a “moment” between them where Han answers Sean’s question: “Why me?”

Han: “Losing one car to discover a man’s character, I can live with that.” Character? — more milk outa my nose. Yeah, character like Daffy Duck. What is he TALKING about? Sean’s only display of any kind of fortitude is when he stands up for Twinkie and defuses a fistfight by refunding an item to the aggressor. Twinkie complains, “Now everyone will want a refund!” But in the next montage, it doesn’t seem to have affected Twinkie’s street trade one whit… in other words, the scene was written simply to justify Han’s line about ‘character’ – because there were no other instances of Sean displaying any.

Toy cars for Godzilla to play with…

DK’s uncle is the gangster who runs the city, Uncle Kamata, played by the great Sonny Chiba, and it is when he makes an ominous appearance that the movie is kicked up ten notches, not only because it’s the great Sonny Chiba exuding gangster in a white suit, but also with his small observation that Han is stealing from DK. So begins a real car chase, drifting through the streets of Tokyo, lives at stake… and Han meets a fiery end…

TOKYO DRIFT is the first film of the franchise directed by Justin Lin, and the first written by Chris Morgan, both of whom would go on to direct and write at least 4 more F&F films. Apparently, the events here take place between FURIOUS 6 (2013) and FURIOUS 7 (2015).

Cameo by Vin Diesel at the end, and we realize how much we missed his mediocre acting, as he tells Sean that Han was a friend of his. As they line up to race, revving their engines – because that’s how these brahs express their man-sensuality – Sean replies: “I didn’t know Han was into American muscle…”

[incoming homo-erotic comment withheld out of respect for the dead]