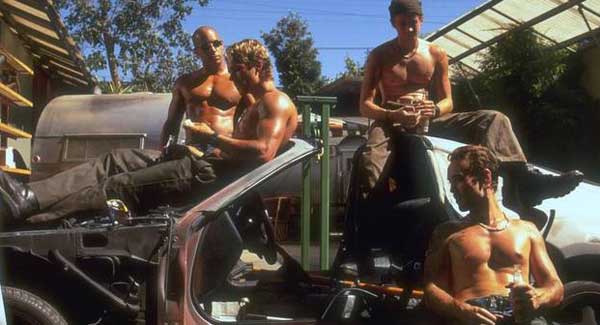 A beautiful undercover cop falls for a muscled street racer in the bromosexual actioner THE FAST AND THE FURIOUS.

Paul Walker is the beautiful cop, Brian O’Connor, and she’s been sent to infiltrate a gang of street racers who are suspected of daring highway robberies of truckloads of DVD players. (Yeah, it’s 2001, when people cared about containers full of stolen DVD players. Nowadays, that many DVD players in a container means they’re being taken to the dump.)

Vin Diesel is the leader of the gang, Dom Toretto; he’s got a fast car, fast women, and beluga biceps that make Brian’s pussy drip. 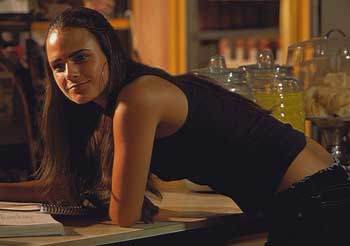 I get it: she works in a food store, because she’s delicious!

Toretto’s sister is Mia (Jordana Brewster, who is so slap-in-the-face beautiful, I didn’t know whether to touch myself or turn Christian. In the end, I went with touching myself). She works in the diner and serves Brian white bread with no crusts (metaphor warning!). Also, it gives Brian a chance to flirt with Mia, angering Toretto’s gang because:
a) they know Brian should be Toretto’s girl;
b) they all secretly want to ask Brian out;
c) they think Mia is too young to start a lesbian relationship.

Toretto’s gang are made up of Vince Toughguy (Matt Schulze), Jesse El Druggie (Chad Lindberg, who looks, speaks and acts so much like Jesse from BREAKING BAD, one wonders whether this is where Aaron Paul got his Jesse?), Letty McMidriff (Michelle Rodriguez, whose testosterone levels are higher than Vin Diesel’s), and a few other nobodies.

Their big thing is Race Wars, a gathering of illegal Los Angeles street racers in furious-pink and angry-blue cars that look like toys, racing other gangs who also have erection-level-pantycars surrounded by scantily-clad super-slim women with flat asses who shake their hips sensually for no reason. Brian challenges Dom, betting the pink slip to his pantycar loaded with “NOS” – nitrous oxide, which gives his car a Mad-Max muscle-boost of speed – and loses! Maybe it was all that unnecessary gear-shifting? (Y’know, I’m no street racer, but I know that once you’re in top gear on a straightaway, there’s really no need to keep CHANGING THE FUCKING GEARS every two seconds, as if you’re gonna go faster because the editor makes it look damn sexy.) So Dom exclaims in front of everyone, “You owe me a ten-second car.” (Oh, WE know what he means don’t we, girls?! Evil laugh.)

Cops! The car-thugs scatter. Brain gets into Dom’s good graces by rescuing him and evading the cops like a bad girl should.

The Japanese street gang appear on their equivalent of the sexy racecars – pantybikes! Led by Johnny Tran (Rick Yune), they spend the movie threatening Dom, chasing him on their bikes and shooting at him with machine guns that never hit anything (because Badguys = No Aim, remember?). We are led to believe these pantyjaps are the DVD heisters. Which also begs the question: If Brian thinks the Japanese gang are the DVD thieves, why is he infiltrating Dom’s gang? Well, because Dom has those sensual muscles and stuff… 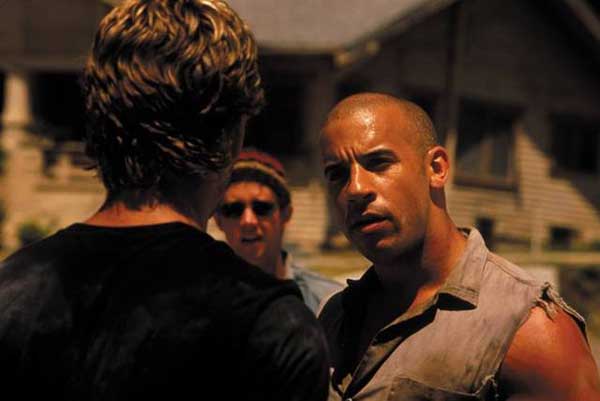 Come on, guys! Just kiss. You know you wanna.

Like any good B-movie, Brian’s cop superiors are on his back, threatening to pull him out of the undercover case (metaphor warning!) if he doesn’t get something solid on Dom soon (metaphor warning!). But Brian has already had that quiet “characterization moment” with Dom, in his garage, surrounded by stiffened steel and dripping 50-weight oil (goddam metaphor warning!), with Dom opening up about his past as a legit racer, until he beat the shit out of the guy who ran his dad racer off the road and killed him (screenwriter class warning!). So now Dom “lives his life a quarter mile at a time. For those ten seconds or less, I’m free.” And Brian has lost his soul (and his pussy) to the muscled musclecar maven.

Since Vince was the only toughguy in Dom’s gang who distrusted Brian, it is kinda touching when Brian pulls off a daring rescue of Vince, during a street heist. His cover is blown (like his virgin ass), Mia is understandably furious (like it says in the title), Dom makes a face like a dog looking at a ceiling fan (making it clear Diesel is here for his pecs, not his acting), and the bromance is threatened…

Walker actually pulls a pretty good performance here, as a cop falling for a bad guy, nuanced as much as he needs to be amidst the stunt driving, roaring engines, and Pretty Orange Explosions. This is definitely the movie that takes BULLITT and THE ROAD WARRIOR chase scenes to the next level, with some creative speed visuals and car-based violence. Neon glow under the chassis for the hip crowd.

And Diesel looks really gigantic in this role, young and fit, coming straight off PITCH BLACK, his first major muscle role – all I know is, I wouldn’t want to be down on the pavement under his rock hard bulk (as Johnny Tran finds himself) being pounded and pounded by those granite fists.

Metaphor warni— uh, or did I just blatantly say I wanted to be pounded by Vin Diesel in a furious-pink pantycar?..