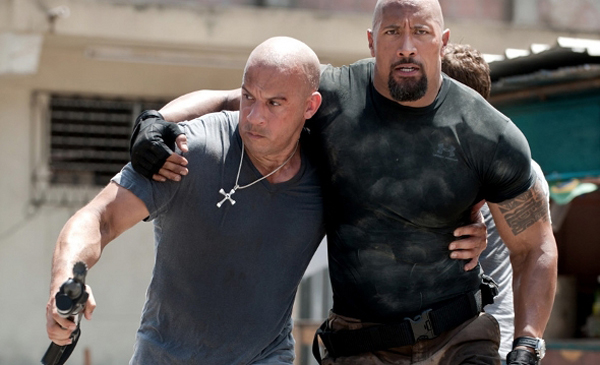 Detective Hobbs advises his team of cops on capturing Dom Toretto and his gang: “Above all else, we don’t ever, ever let them get into cars.” Is anyone hearing how this sounds?

Uh, sir, are the cars magic?
“No.”
Well, uh, why can’t we just shoot them with rocket launchers if they get into cars?
“Just don’t let them get into cars!–”

The fifth film in a franchise now roaring on nitrous oxide, FAST FIVE continues the hyper-real adventures of racer-slut Dom Toretto (Vin Diesel) and his bottom bitch Brian O’Conner (Paul Walker). It is such a well-produced farce of gunmetal action sequences that it can almost be forgiven for its insanely idiotic plot and events.

Because how do we account for Dom robbing a speeding train by slicing open the middle carriages from the side, and bumping out the sports cars from within, without the train even slowing down, let alone stopping to investigate what all the commotion is about midway down its length? Because what can we make of the agents guarding the train discovering it is being robbed and even whilst drawing their guns to go stop the robbery, ordering, “Don’t stop the train!” Give me one good reason why it is easier to stop a robbery on a train going full tilt?

Seems every action sequence in this movie made for short attention span popcorn addicts is predicated on the fact that nothing exists outside the consciousness of our heroes. That’s how they can steal four police cars to pull a heist and there is nothing on the news about it, no police bulletin on recovering the cars, no liability and no ramifications.

Movie opens directly after the last installment (FAST & FURIOUS), with a daring rescue of Dom from a prison bus by Brian and his girl Mia (Jordana Brewster) in two musclecars. Because two small sports cars can not only run a full-sized reinforced bus off the road, but can also make it flip over five times when it crashes. So realistic my brain hurts.

Then the train robbery, which is admittedly heart-stopping, as Dom rescues Brian from the train just as their car goes off a cliff into a river with both of them in it! Explosions – as three whole carriages are ripped bodily from the rails. Doesn’t matter. Train never stops. That’s what I like: a good, solid, responsible transport authority.

We catch up with Dom, Brain and Mia hiding out in Rio de Janeiro, Brasil. Taking refuge at Vince’s place (Matt Schulze). While they plot to pull one last heist to regain their financial freedom and emigrate to a country without extradition, a rock rumbles their way – man-mountain detective Hobbs (Dwayne Johnson), who appears like a puffy baby wearing a t-shirt two sizes too small, and empowered by the U.S. gubmint to bring Dom down for the train robbery. “When the FBI wants to find someone, they call him.” Shyeh royt… 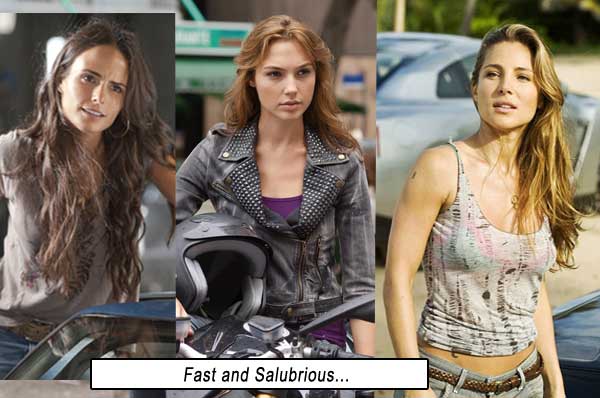 The selling points of all this sociopathy.

Hobbs brings the glorious, tight-chested Elsa Pataky (real life wife of Chris Hemsworth) as his second officer, although it must be for the eye candy because she never once proves her arrest utility, but always looks damn sexy while she’s not arresting anyone.

Dom and Brian decide to recruit a team to take down a Brasil kingpin (Joaquim de Almeida) for $100 million. To fund their escape to parts unknown. Thus would coalesce the ragtag espionage driving gang that would follow them into the next movies. It is here that the “family” ethos starts gaining a foothold, so that audiences won’t regard these quite callous criminals as the sociopathic pricks they truly are. Oh, you want to argue they are not sociopaths? What else would you call the utter disregard for human life and property from all the collateral damage as Dom and Brian drag a giant vault through the crowded streets of Brasil?

To add to the family cache, Mia is pregnant, and Brian spends a few bro-down minutes with Dom lamenting he didn’t know his father, so he doesn’t want to end up a deadbeat dad blah blah — put it back in your pants, Brian. Can I also say I hate the way these toughguys hold their longneck beer bottles? What IS that?! Hold it without looking like a posedown for GQ.

In a montage, Dom and Brian recruit their specialty misfits (Tyrese Gibson, Ludacris, Gal Gadot, Sung Kang, and a couple of Brazilians). Plot becomes indecipherable from a piece of exploding cheese around this point, and we find ourselves watching incredulously as they drive “drifting” cars through a course for reasons unknown, acquire the kingpin’s handprint from Gal Gadot’s ass, win a musclecar from a street race for reasons, steal four police cars for reasons, and plant a trace under Hobbs’s armored car for other reasons.

The Furious Crew are stopped dead in their tracks by a spelling bee.

The first time Hobbs appears to arrest Dom and his gang, he has water all over his head, like he’s either just stepped out of the shower or his steroids are not agreeing with his immune system. This confrontation would inevitably lead to The Rock versus Diesel in a mega-battle to the tricep curl! In the end, Hobbs will begrudgingly take Dom’s side, and stop pursuing him to help him kill the kingpin – just shoots the kingpin on the street, no trial, no evidence, for vengeance sake (“You killed my team!” – oh, so I guess then it’s okay to murder in return because you’re a cop). Poor Hobbs. Obviously fallen under the spell of the same Dom armpit-musk that Brian O’Conner fell victim to. I defy a more logical explanation.

The dragging-vault-through-streets finale is so criminally audacious that any notion these anti-heroes should be loved or supported should be objectively tossed out the window. Two race cars, driven by Dom and Brian, drag and slash a vault the size of a shipping container through city streets, utterly annihilating everything in their path; people scrabbling, screaming out of the way, parked cars and moving traffic alike demolished like butter — I mean, people died, right? You don’t create this much havoc without people dying. Ramming it through the corners of buildings, police pursuit cars crushed like paper – Are they expecting us to believe the law enforcement officers (who have families of their own and who are just doing their jobs to provide for those families) are crawling from their pulped wrecks alive and uninjured? Oh, I forgot, nothing exists outside the consciousness of our heroes. Only our heroes are allowed to say “family” unironically with such sacrosanct respect. Everyone else’s family can fuck off and die.

By the time Dom is surgically demolishing a whole squad of police cars by swinging the vault around on its cable through the squiggly creative swerving of his sports car, the filmmakers (writer Chris Morgan and director Justin Lin) are not even using the thinking parts of their brains any more, just some animal limbic instinct, grunting the directions to the stuntguys and stroking their dongs in a blur of kinetic bullshit.

Because that’s what family is all about.