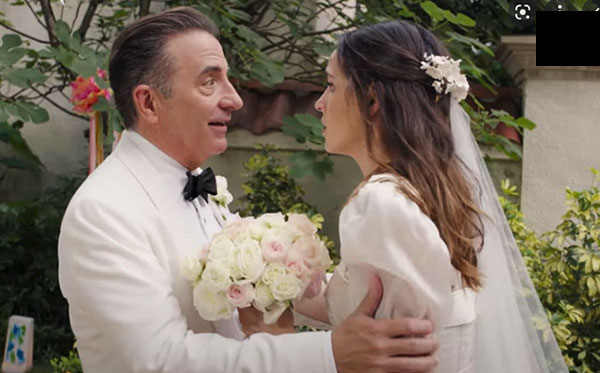 “I just remembered: it doesn’t matter how shit this film is – I’m still Andy Garcia!”

Latin remake for a new audience… of rich white people.

I love Andy Garcia. I’d watch him in any piece of crap. Even crap like FATHER OF THE BRIDE, the 2022 Latin remake of Steve Martin’s 1991 upper middle-class remake of the 1950 Spencer Tracy white privilege classic. The story (written by Matt Lopez, THE SORCERER’S APPRENTICE 2010) might have strayed far from the original Tracy vehicle, but director Gary Alazraki (NOSOTROS LOS NOBLES) serves up a fresh slice of the same old hell of father-dumb mother-right bride-faultless.

Garcia is architect Billy Herrera, an over-protective father who discovers his 20-something daughter is engaged to be married. At the same time, Billy and his wife Ingrid (Gloria Estefan) are planning on divorcing – but don’t want to tell daughter until after the wedding… because… they don’t want to ruin her happiness with the reality of marriage being a sham? Duplicity about their dead love because… they want to scam their daughter into a state they both hate because misery loves company? And here’s the stupidest part of this irony: Billy wants to reconcile his marriage, while Ingrid wants the divorce, yet it is Ingrid who favors her daughter’s marriage while Billy is against it. Shouldn’t it be the other way ‘round? But it clearly states in the American Romantic Comedy for Dummies handbook that father shall hate the idea of daughter getting married – so we’ll stick with the rules to keep audiences as dumb as they demonstrate themselves to be.

But even this imminent divorce is a sham in an American Romantic Comedy for Dummies. Because the pathetic narrative in American movies and culture is that marriage is the desired state, and every man-woman interaction leads to it. So in Billy’s and Ingrid’s case – divorce is about as likely as an alien invasion. And of course daughter is going to get married – no matter the adversity of her parents divorcing, or her father embarrassing her, or a hurricane tearing down the wedding venue itself. Did I blow the ending for you? You must be 12.

Adria Arjona is betrothed daughter Sofia, marrying Adan (Diego Boneta), who has convinced Sofia to practice volunteer hippie law in underprivileged countries with him, to Billy’s mortification. It’s the old story of “I started with nothing and worked so hard and sacrificed so much, so that you wouldn’t have to.” Well, they DON’T have to. You see, we discover Adan’s father is a billionaire (Pedro Damian as Hernan), which draws Billy into a dick-measuring contest on who should pay for the wedding. But that diversion is to distract from the plot convenience that Adan and Sofia can waste away their lives in any manner they please with daddy bigbucks in the wings – which completely dilutes the noble character that they were trying to imbue the couple with.

Movie is derailed quite easily as it attempts comedy via age-worn tropes: everyone loves the prospect of the wedding EXCEPT the father; taking the groom to a strip club where he runs screaming from the sluts (because he has to comply with “good guy” protocol of being celibate, otherwise his infidelity would raise too many tangents); the intrusive, shrike wedding planner (Chloe Fineman from SNL, in a role where you will forget her quicker than you forgot her vanilla characters on SNL); the fathers feuding, the money misunderstandings, the generational jokes…

The one saving grace: Andy Garcia. Every gesture, every word, every expression is golden. Hilarious and rich, subtle and nuanced, he evokes more Spencer Tracy than Steve Martin, taking us back to those roots of cinema when just a gesture or expression spoke volumes. At one point, his wife tries on her old wedding dress – and actually gets into it! (even though she’s at least 50 pounds heavier than that dress we saw on the hanger). Of course, Garcia’s Billy sees this and flashbacks to better times, and in his eyes we can see the desire that once burned there! When the venue is ruined, he tells his daughter, “You can have it in our home,” and his voice hitches on “home.” It was over for me – the tears flowed. Not because their stupid wedding was saved, but because I cannot get over great actors ACTING! The way Garcia said “home” with that regret that it was no longer his home due to his wife angling to shaft him. 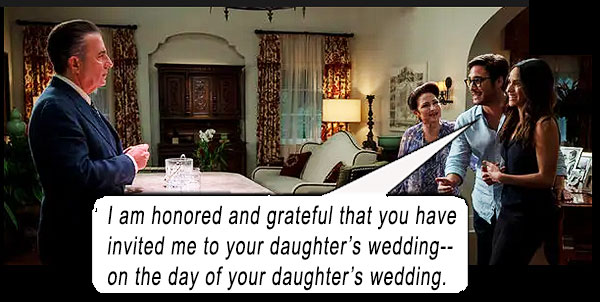 When Andy Garcia was young and strapping, Diane Keaton, who played alongside him in GODFATHER III, was made-up to look like an old woman. Now Andy Garcia still looks like he can take on Joey Zaza, while Gloria Estefan looks older than Diane Keaton’s old-woman makeup. I remember Estefan from her heyday song, “Come-on-baby-dooby-daffy-do-ba-conga” – and her visage now is that of another person altogether. Garcia is a robust 66, looking like a tougher, sexier version of his young gangster, while Estefan is 65 and looks like his mother. And the woman playing Estefan’s mother looks like her sister.

Though Billy constantly tries to mend their relationship, Ingrid continually pushes him away. Manifested in the running gag of him asking her how they should interact during the wedding, to retain the façade of marriage – Billy: “Can we sit together?” Ingrid: “Yes.” “Can we hold hands?” “Yes.” “Can we kiss?”— “NO!” But of course, we KNOW where that gag is heading: The final time he asks those questions, the last answer is what we all know it to be. To keep the cliché quotient at high tide, at the wedding, they play Wagner’s Lohengrin (aka Here Comes The Bride) and Pachelbel’s Canon In D. Any more fucken questions?

Executive-produced by Brad Pitt and Garcia, FATHER OF THE BRIDE has a few redeeming qualities, such as the easy manner the older cast slip in and out of Spanish and English, and when Billy and Ingrid both walk their daughter down the aisle, Garcia’s ACTING makes me almost believe this institution full of platitudes and useless words might just be romantic and spiritual… but then when daughter sees evidence that marriage is a bed of vipers and liars, and that her fiancé kept the news of her parents divorcing from her, and she still wants to get married, I am shaken back to evolutionary reality, in that this fit breeding couple is only geared toward mating; no social strictures and emotional baggage is going to deter these organisms from combining gametes for genetic continuance.

The final insult comes when the family must organize the full wedding day program out of nowhere when a hurricane destroys their venue, with new location, food and drinks, band (with not one power cord messing up their tidy cinematic stage), officiant, parking, bridal party, lighting, tables to seat 400, food for 400 out of nowhere like Jesus and the Fishes, stage power, seating arrangements, flowers, décor, cake… it’s not enough to insult brides and grooms and fathers-of-the-bride everywhere, now this slap in the face to every professional vendor that puts months of time and effort into the deliverance of their services – this movie tells us any old bunch of civilians can lickety-split a wedding in one hour flat. Who needs YOU, Vendors?!

It’s not like I am the cynic toward all “wedding movies” per se – the original is great entertainment, the Martin remake is very good, and FOUR WEDDINGS AND A FUNERAL is a 10-star movie. No, this 2022 FATHER OF THE BRIDE is simply tripe. The filmmakers’ attempt at remaking an old classic for a Latinx audience is noble (as Billy says, “First of all, I don’t know what Latin-x means…”), but then to homogenize the Latin culture, as if made BY white people FOR white people on their vague idea of Latin people. They thought that by throwing in the great Andy Garcia, no one would notice how whitewashed and western and wank this is. And they were right.