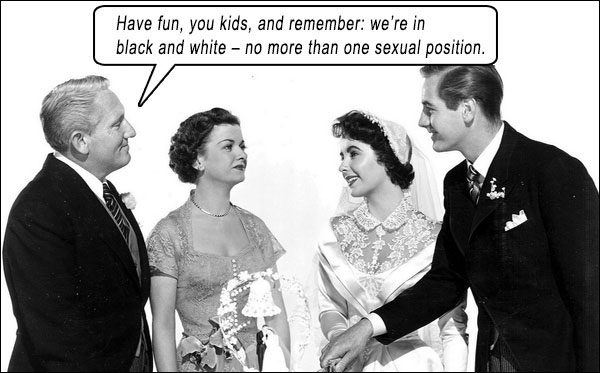 To appreciate this movie, we first have to get over the pointy bras. And the soft-focus females, the high heels and pearls worn around the house by the wife, the married couple’s separate single beds, sleeping with all their clothes on, and the fact that everyone 50 looks 80. Oh, also the black slave.

1950 was such a different time. Yet betrothed couples were deluding themselves in the same manner they do today; that marriage is about love and tradition and brides and wedding preparations.

Spencer Tracy is Stanley Banks, THE FATHER OF THE BRIDE. After their 20-year-old daughter announces her intention to marry a 26-year-old suitor, Stanley and his wife Ellie (Joan Bennett) must weather the physical and financial and psychological storm of the impending wedding. Elizabeth Taylor is their betrothed daughter Kay. (In hindsight, we are left with an impression of Liz Taylor from her most infamous foibles – her 7 husbands and her CLEOPATRA (1963) – that of a man-eating diva harridan; but here, she is so young and slim and innocent (18 years old), we are looking at a different person to the Hollywood celeb she would become. And that pointy bra could take your eye out.)

Spencer Tracy is this movie’s tentpole. He’s holding everything else up around him; Joan Bennett may be a noted leading lady, but here she is a simple-minded slave to tradition ( yet in real life, she married the first of her four husbands when she was 16); Taylor brings some youthful spunk to the proceedings, but she also is simply parroting social mores of the era; her fiancé (Don Taylor as Buckley Dunstan) is a basic straight arrow (why do wealthy American families in the 50s always sound British?). Tracy singlehandedly saves this movie from maudlin mishap, with a grounded, poignant, subtly comic performance. His controlled exasperation in the face of spiraling chaos would inform every remake across the decades.

As the expenses mount, at one point, Stanley suggests to his daughter: “How about I give you $1500, and you can elope?” Hilarious comeuppance immediately as wife Ellie walks in and he must deny he even suggested such a preposterous solution. Another easily missed funny moment is when Stanley tries on his original marriage tux, and we see him exhale to button it. And marvel at Stanley complaining about the orchestra costing a whopping $85!

Marriage as business (when noblemen wanted to extend their properties), marriage as politics (when royals wanted to accrue allies), marriage as bureaucracy (signing forms that join you to the state) – realities that all marriage movies ignore in favor of farce. Because – America. Though the innumerable ridiculous traditions that embugger marriage have been passed down from other cultures (white dress = Victorian Era; exchange of rings = Rome and Greece; father giving bride away = transfer of property, Church of England; groom not seeing bride before wedding = pre-18th Century arranged marriages; bride’s parents paying for wedding = agrarian cultures literally paying suitors to take their worthless daughter off their hands), this movie might have been the first to lay out the modern format so fastidiously – from engagement, to preparation, to rehearsal, to wedding and reception, as well as establishing the Bridal Entrance song as Wagner’s Wedding March from Lohengrin (aka Here Comes The Bride), and Mendelssohn’s Wedding March as recessional – thereby compiling all these various esoteric idiocies into a distinctly White American experience. My point is: There are still many cultures that do not celebrate this now-stable range of traditions that White America keeps churning out in “romantic comedies” and “wedding farces” – it’s a movie made BY Westerners FOR Westerners. (I always wonder how non-Westerners regard the “jokes” in movies of this ilk; do multiple-wife cultures understand the graveness of a woman accusing her fiancé of “cheating”?; do cultures that introduce the bride raucously in dance understand the solemnity of placing the right foot first in walking down the aisle?…)

And White America always regards the institution– the sacrament– the binding legality— the call-it-what-you-will of marriage as FARCE. This original story (from a novel by Edward Streeter) and every romcom since have turned the dryness of a state-endorsed contract into a White American Fantasy that all young girls aspire to, and all young men are scammed into believing is beneficial to their psyche and masculinity. (As Bennett says, “A church wedding, well it’s what every girl dreams of…” – IS it? Or is it what you’ve told society to dream of?) This genre of movies has been conditioning First World society for a century that Mother should be excited, Father should be cynical, Bride is faultless, and Groom is just the square-jawed, testes-bearing non-entity who will impregnate the Bride and cater to her every whim. (NEVER has any of these movies dealt with the reality of Father repulsing himself thinking about his daughter being mounted like a baboon in estrus by the man whose hand he is currently shaking.

Also included here, as if afterthought, the throwing of rice. When the bride and groom walk out alone after the ceremony, the church crowd remain in their seats – yet upon stepping outside, they’re greeted by well-wishers throwing rice! Uh, how did these people get there? Were they outside all this time, while the ceremony took place inside? Why weren’t they inside as well? Are they even friends of the family or just hired to be outside and throw rice? (Throwing of rice was instituted by the ancient Romans, for fertility and wealth, although being shown in this film alongside every other tradition, it solidifies its place in American culture.) 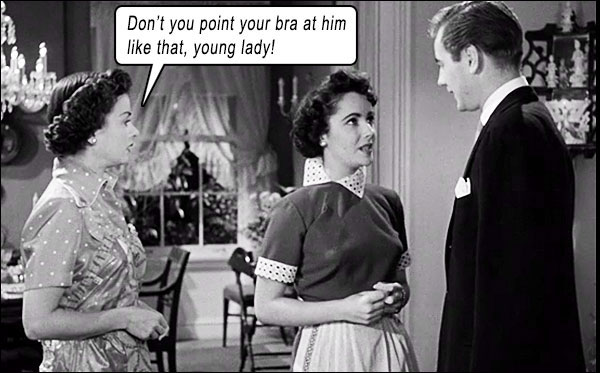 Noted director Vincente Minnelli stages a claustrophobic dream sequence, where Stanley tries to run down the aisle to rescue his little girl, restricted from moving by the floor sucking him into it. It’s remarkable not only for its non-CGI effects that capture the ineffable feeling of not being able to run in dreams, but that that feeling itself has been baked into the human subconscious since our DNA started reading homo sapiens.

One thing that HAS changed in humans, is that in less than a century, people look very different for their actual ages. In 1950, Joan Bennett was 40, and was startlingly skinny for her age; Spencer Tracy was 50, and looked 60! The groom is meant to be 26, looks 40. The groom’s parents looked like his grandparents, especially the mother, who not only looked 70, but spoke in that old woman croak as well. A telling difference between Bennett and Groom’s witchmother is that Bennett is still gettin’ it on with a pointy bra – a symbol of pert youth. And those helmet hairdos made every woman look 10 years older. (Casting was all over the place in those days – remember all those hipster movies with 30-year-olds playing “teens”?)

And we end as we began – back at Tracy’s exemplary performance: When the priest asks, “Who giveth this woman?” we feel every inch of Stanley’s ache when he echoes in voiceover, “This ‘woman’ – but she’s not a woman – she’s a child…” as he answers, “I do,” and then steps back from the altar. The camera is behind the priest, and we see Stanley fade back, increasing the distance between himself and his child, fading into the shadows, no more a part of his daughter’s life… he has “given her away” to be sheltered, supported and loved by someone else. It makes us realize the truly harrowing experience this act must be for any real father of a bride. And those thoughts about the baboon have to be pushed away as well.

During the reception, more farce as Stanley tries to kiss the bride all night and doesn’t get the chance, before she leaves on her honeymoon… Almost a sad ending – but Kay calls him from the station to say goodbye, and he is content. Now he can rest, as his daughter and her husband embark on their fulfilling life together of sleeping in separate single beds with all their clothes on.