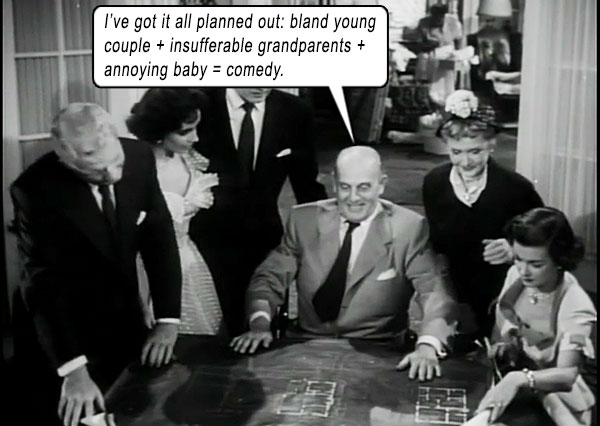 FATHER OF THE BRIDE (1950) was a refreshing original movie, a well-acted, Oscar-nominated comedy that gave us a frazzled father’s poignant perspective on his only daughter being married off. And the sequel, FATHER’S LITTLE DIVIDEND, continues the story of that father-daughter relationship because – money. MGM had a critical and commercial hit with FATHER and rushed through a sequel the next year. And (as venal Hollywood has proven to us through the decades of releasing sequels solely as cash-grabs), it sucks. That didn’t stop it being a commercial success, like its predecessor. Coincidence that the title of the film is what this film was to its studio execs? And for added insurance – my god, look at the pointy bra on the poster!

All the actors from the previous film reprise their roles. Spencer Tracy as Stanley Banks is again the shining light in this sequel – not only because these movies are told from his point of view, as the Father of the Bride, but because he is hands down giving the best performance, brilliantly underplaying. But alas, all his charisma and grounded style is not enough to save this movie from its own stupid story, and the idiocy of the characters. Stanley must now face the prospect of his daughter Kay (Elizabeth Taylor) being pregnant, and come to grips with being a “grandfather.” Stanley’s wife Ellie (Joan Bennett) is still just a prop, and Kay’s husband is still a wishy-washy non-entity (Don Taylor as Buckley). Even Buckley’s parents reprise their roles (even though I thought they would surely be deceased after being so old in the previous film). 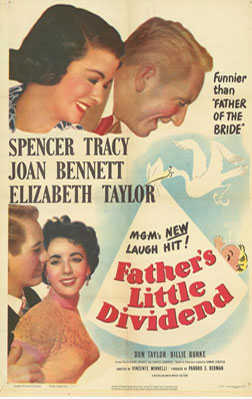 Directed by Vincente Minnelli (who also directed FATHER), the movie thinks to create adversity for the expecting couple by having Kay accuse Buckley of cheating, and running back home to her parents. In that era of no cell phones, Kay “called the office” when Buckley was working late and, because there was no answer, deduced he was cheating. While Buckley claims he’s been working long hours to support his wife and coming baby and “must have stepped out for a cup of coffee.” That old story never changes: husband working hard to provide for family, and dreamkiller wife complaining about the very work that puts a roof over her head. (Of course, Buckley is telling the truth – this movie is too vanilla to actually insert a cheating subplot.)

With Kay back at her father Stanley’s house, Stanley visits distraught Buckley, advising him, “If you want her back, you’ve got to go get her. You can’t expect any self-respecting wife to come home under her own power.” (And what about the self-respect of the husband? Out the window with the baby and the bathwater.) Buckley complains, “I give her money but she keeps losing it.” Uh, Red Flag City over here! Isn’t that in itself grounds for him to think:
a) that she is cheating herself, spending it on hotel rooms and such,
b) mildly retarded,
c) not responsible enough to be a wife or mother?
And if he means she spends it on girly shit, well, see (b) and (c).

But there’s a bigger issue here: If Kay honestly thinks Buckley is cheating – enough to run back to her parents! – then she’ll always think that. The fact she fled means she’s past the threshold of doubt; there was no discussion, no piecing together of evidence – if Kay is prone to irrationally believing Buckley is unfaithful for the flimsiest of reasons, that’s the end of their relationship as it once was. Buckley correctly asserts, “If she doesn’t believe me, that I’m working like crazy night after night for her and the baby; if she doesn’t take my word for it, then it doesn’t matter, it’s finished anyway!”

The conflict is resolved in what seems to be a romantic manner – Buckley resigns himself to Kay staying with her parents, showing concern unselfishly, stopping her carrying bags upstairs, asking Stanley to make up a room for her downstairs, telling Stanley her dietary needs, and then taking her shoes off because it’s hard for her in that pregnant condition… and she starts weeping at his empathy, and they kiss longingly…

The filmmakers are manipulating us to weep along with Kay at the reconciliation – but hold on a minute! Kay created adversity out of whole cloth – there IS no cheating involved here, Buckley is guiltless! And now in showing concern for her, SHE behaves as if SHE’S forgiving HIM! When there was no conflict to begin with, except that which was created in Kay’s suspicious head! Why is HE pandering to HER at this point?! We never do hear a Big Fat Apology from Kay for putting Buckley through the wringer that night (and by not showing an explicit apology, the filmmakers are tacitly acknowledging that the woman can simply GET AWAY WITH accusing her man of infidelity with NO REPERCUSSIONS, his only recompense a quick tongue-job on her father’s stairs).

In the last movie, we saw the innocent naif side of Elizabeth Taylor – but here, she seems to have added a caustic edge to her character; indeed, FATHER OF THE BRIDE was released just as she married her first husband (when she was SEVENTEEN – Conrad Hilton Jr.), and by the time DIVIDEND was released in April 1951, she had already divorced him in January. So she was filming this during the breakdown of her immature marriage; more than once we see that disparaging look on her face that 7 husbands must have seen and loathed time and again. 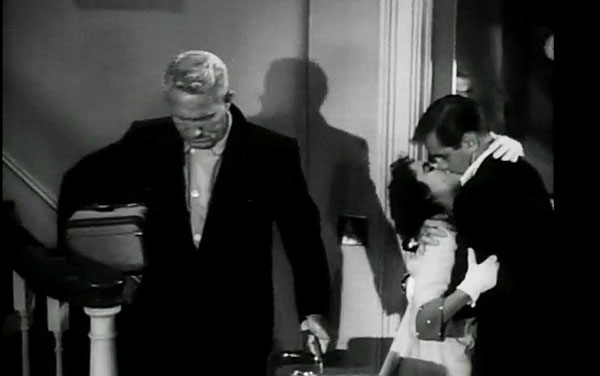 Albert Sendrey composes (THE GREAT CARUSO, THE KISSING BANDIT) – that type of happy happy joy joy “comedy soundtrack” that makes you wanna slap someone. And for that touch of extra slapstick, there’s a comical oboe theme just for Stanley.

He spends the latter third of the movie arguing with all the other characters about the baby’s name, and running from the baby every time it gets near him and cries. I mean, it’s a cute, plump little baby, but the fact it is made to cry every time Spencer Tracy is around means Babies Were Psychologically Harmed In The Making Of This Film.

The film’s final sequence is its stupidest, and it tries to turn it into some sort of redemption between Stanley and the baby: Stanley takes baby in stroller on a walk… he leaves stroller parked near a bench and goes to play soccer with some kids – returning to find the stroller gone! Firstly, it’s completely out of character for Stanley to do something so irresponsible. Secondly – instead of trying to find it in the vicinity, or calling the police, or even running to a police station (because, again, in our modern age, we cannot comprehend what it was like not to have cell phones or nearby public phones) – he runs home! How can it possibly be at home, unless someone you knew came and took it, and if it was someone you knew, then they’d look for YOU in the vicinity and find you with the boys, and that’s that. This plot point is merely to “lose” the baby so it can be “found” by Stanley (when he eventually thinks to visit a police station), whereupon the baby can suddenly tolerate Stanley with no tears. As if the baby learned some kind of lesson or something. What??! And the cops! Bunch of smarmy pigs! Verbally sparring with Stanley before handing the kid over. And handing it over without any identification… You will fall out of the movie so hard in this sequence. And never find your way back in due to the film’s final moments —

The families have constantly been disputing baby names and seemed to have settled on Herbert, yet SIX MONTHS LATER at the (very catholic) christening, the priest asks what they shall name this baby, and Kay reveals the baby’s name as “Stanley Banks” – and Stanley is pleasantly surprised and everyone is agreeable (even Buckley’s ancient parents, who have simply given up their skin in the name game it seems) – but can I insert a record scratch here?

Though it’s a filmic payoff, has anyone considered the real life implications? Were all the parents conspiring to surprise Stanley whilst scarring the baby for six months by calling him “Herbert”? And now he’s got to attune to a completely different name? The 60-year-old Elizabeth Taylor would presumably look back on this brain-fart and say, “So? Every few years, my husband would change names as well…”