A corporation is logging the Australian Ferngully rainforest – and the fairies don’t like it! 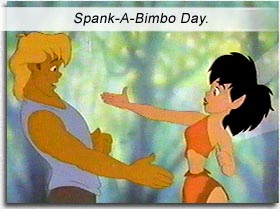 So… conserving rainforests is not to preserve the complex ecosystem and therefore the delicate balance of life on Earth itself. No – it’s so FAIRIES will have a place to live.

The film is dedicated to: “Our Children and Our Childrens’ Children.”

FERNGULLY: THE LAST RAINFOREST follows sexy, half-naked, winged, tramp sprite Chrysta (voiced by Samantha Mathis), as she discovers humans in the forest, doing something unthinkable – wearing clothes. And cutting down trees. We are led to believe the humans are killing trees for no reason, but – without advocating senseless destruction – logging is done for a number of reasons, none of which is specifically so that fairies go homeless.

Chrysta’s magic old witch friend (voice of Grace Zabriskie) once entrapped an evil spirit called Hexus (Tim Curry) in one of the trees. The logging people unwittingly free Hexus by cutting down his imprisoning tree. (I really shouldn’t go into the nonsense behind a metaphysical prison being breached by physical means.)Hexus then possesses the big logging machine, so it can be anthropomorphized into a snarling beast. And working for that beast, the representatives of humanity – two bucktoothed layabouts who drive the logger and a big blond American idiot, Zak (Jonathan Ward), with arms more muscle-bound than his brain even, whose menial job is to spraypaint an ‘X’ on the trees scheduled for the axe.

And the headlines read: BIG BLOND AMERICAN IDIOT SHRUNK TO FAIRY SIZE. (Although film is made by Australian production companies, and although Zak’s license says he lives in Byron Bay, Australia, Zak’s accent, demeanor and provincial arrogance dub him unmistakably American.) Through a magic spell, Zak becomes as tiny as Chrysta and shares his ignorant human perspectives with the forest sprites, who teach him how to become more forest and less technology. Which is kinda futile, because Zak in no way represents humanity OR corporate interests – I shudder to think that this blond bell-end supposedly speaks for ME. Or anyone with more brain than brawn.

Zak infuriates Chrysta’s fairy boyfriend (Christian Slater) by trying to get naked with her, then makes us question how he could harbor those desires when he starts singing nature songs like a fairy, as he is gradually propagandized into a tree hugger. Very noble an’ all, but even though he helps grind the Bad Machine to a stop, having his eyes opened to the ways of the woods won’t stop deforestation. He is a bottom-rung day-laborer. He has no say in the corporation sending another Bad Machine to replace the one he wrecked. He’ll be fired and the logging will continue unabated.

Robin Williams voices Batty, a bat who escaped an experimental lab (forever burdened with an antenna stuck in his ear), who helps the fairies with his usual flap-yapping Williams shtick.

And then the worst crime of all – magic. Final scenes of FERNGULLY show a denuded forest being regrown in minutes through the fairy witch’s magic – which undermines the movie’s entire message. If our childrens’ children see a rainforest grown from nothing in minutes, how are they ever going to appreciate it as something precious and rare and hard to regenerate? If a rainforest can be grown instantaneously through Magic, well, why the hell NOT tear it down for homes for the homeless and creating jobs for the economy and then re-grow another one like in the movie?

Moral: As long as magic fairies are so militant about keeping their homes, we’ll always have rainforests.