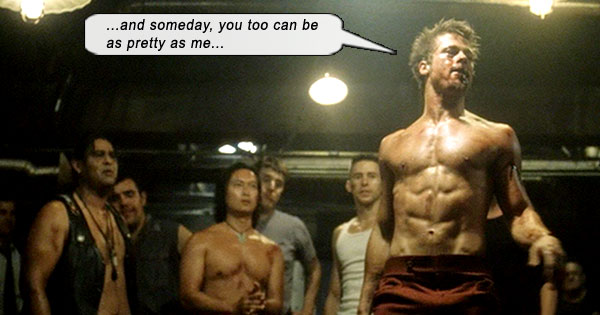 This is your life and it’s ending one minute at a time.
–Tyler Durden, FIGHT CLUB.

First rule of FIGHT CLUB: You do NOT talk about Fight Club.

So I’m gonna get my head kicked in for writing this. Because I’m also breaking the Second Rule of Fight Club: Do NOT talk about Fight Club. Don’t tell Tyler Durden.

Brad Pitt is Tyler Durden, ripped obliques and bloodied soul, maniacal instigator of an underground club of masochistic dissidents pushing the boundaries of ethics, laws, physical pain, acceptable behavior – for the animal thrill of it. Fight Club is his loose aggregate of sociopaths aiding and abetting his maladjusted mischief.

Edward Norton is Durden’s conscience – in more ways than one. He’s a nameless, dissatisfied Office Guy (credited as Narrator), cubicle, apartment not much bigger. He’s looking for an answer to the crushing boredom of his life. He reads columns styled on the old Reader’s Digest articles about “Joe” (I Am Joe’s Liver, I am Joe’s Heart, etc.), here called “Jack” and transposed into his bleating existence: I am Jack’s inflamed sense of rejection. One day, he meets Tyler Durden, who asks him to punch him in his pretty face. Because how much can you know about yourself if you’ve never been in a fight? Then Narrator’s apartment blows up.

Tyler’s philosophy is infectious: You can’t really feel alive unless you’re living on the edge of life. “Quit your job. Start a fight. Prove you’re alive. If you don’t claim your humanity you will become a statistic!” So Narrator goes to work one day, beats himself up in front of his boss, accuses his boss of doing it – and gets a settlement for life to keep his mouth shut.

I am Jack’s smirking revenge.

Now he can move in with Tyler, into a leaking deathtrap hellhole of a house, where they can fight to their heart’s content while making soap (Tyler’s ostensible profession). They informally recruit other Fight Club members, including the big-titted Meat Loaf (yes, the Bat Out Of Hell, credited as Meat Loaf Aday), who engage in bloodied battle each night in the hellhole basement. Just for the fuck of it. Until Tyler starts giving out “assignments” to the members: “Today I want you to start a fight with a total stranger. And I want you to lose.”

Helena Bonham Carter is Durden’s junkie girlfriend. Usually in movies of this ilk, her role would be ad hoc “conscience” but here she is purely a prop to confuse us on Tyler Durden’s identity. Since I can’t talk about Fight Club, I can’t tell you any more.

FIGHT CLUB is director David Fincher (SE7EN) at the top of his game: gritty, aggressive, dangerous, like a foaming dog tinted slime green. Pitt looks like he’s constantly smeared in poo and Norton looks like he hasn’t slept in three weeks. We can smell the filth that these guys live in, and we can taste the madness in their eyes.

Every word you read of this useless fine print is another second off your life. Don’t you have other things to do? Is your life so empty that you honestly can’t think of a better way to spend these moments? Or are you so impressed with authority that you give respect and credence to all that claim it?
–Tyler Durden

Of course, the paradox in Tyler’s rhetoric is that his sheep-minded followers pay obeisance to him, even whilst he is telling them not to follow leaders, much like Pete Townshend’s magnum opus TOMMY exhorted his sheep not to follow icons, even whilst transforming himself into one.

Questioning the core ideals of a stultified society, Tyler’s endgame is to blow up the TRW – the corporation with fingers in everything from aerospace to credit monitoring. There is a recant of sorts towards the end – I would presume the MPAA had their retarded way and insisted that even if the TRW blows, Tyler should be repentant -but the beauty of FIGHT CLUB is that even though Tyler wants to abort the plan he set in motion, the TRW destruction goes ahead anyway: buildings explode in a soundless ballet while he watches with his trashy woman, bullethole in his neck leaking blood. (This movie would have retained its perfection had he NOT recanted, embracing his role as anarchic idealist who brought about the destruction of the greatest bane to humanity ever invented, besides the Federal Reserve, of course)–

Oh hi, er, some big guy with a steel pipe has kicked down my door! No no, I wasn’t talking about Fight Club, this is an article on the mating habits of snails – oh, er, well you didn’t look like you could read – hey, think about it: it only promotes us if I talk about Figh–” The big guy pulls his fist back to pummel me; I grimace and flinch autonomously at the sweet pain about to land —

The big guy pauses mid-bitchslap as he recognizes me.

Yes. Yes, I am Tyler Durden. Now fuck off!