In the first three minutes of THE FIGHTER, we realize that Christian Bale should not have won that Academy Award for Best Supporting Actor in this film. He should have won for Best ACTOR. 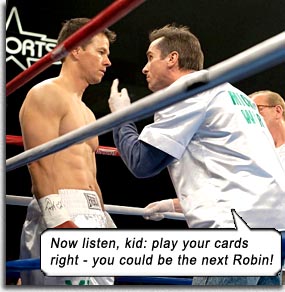 Yes, we know the technical definitions of “main,” “major,” and “supporting” characters – but really! Bale’s Herculean immersion into his wild-eyed character drove this film, which, without his involvement, would have been merely another lazy story about an underdog clawing his way to the middle echelons of a testosterone-induced inferiority-complex dick measuring competition; to call boxing a “sport” is to imply it has some intrinsic spiritual worth.

Bale is to THE FIGHTER what Kilmer is to TOMBSTONE, what Brando is to STREETCAR, what Day-Lewis is to GANGS OF NEW YORK.

Bale is Dicky Eklund, a gregarious, trouble-seeking, ex-boxer from “Bahston,” who trains and manages his younger brother “Irish” Micky Ward (Mark Wahlberg) with the best intentions, yet with no clout to take Micky into the bigger leagues where he belongs. Mother Alice (Melissa Leo) co-manages with big dreams and bigger hair.

Dicky’s claim to fame is that he once knocked down Sugar Ray Leonard. (Leonard plays himself alongside Bale and Wahlberg – still looking twenty years younger than his age.) Since this movie is based on real life characters, we see some old footage of the real Eklund swiping at Leonard and Leonard hitting the canvas; contention to this day whether Leonard slipped.

But Dicky is a junkie. Though he must have once retained a modicum of discipline to grace the ring with Leonard, when we meet him here, he is so way past gone that when HBO interviews him and follows him around with a camera crew for a documentary on crack addiction, he sincerely thinks they are documenting his boxing comeback.

Bale’s performance is magnetic, crafting a character through mind and body; gaunt, emaciated, a junkie for all intents and purposes. Oldman, Seymour Hoffman, De Niro. Bale is an actor willing to go so deep into his role that we truly think he lives there; an actor who makes us forget he was someone else in his previous movies – we do not look at this incoherent, twitchy crackhead and immediately think, “Hey, this guy is John Connor!” – and we really have to woik our imaginations to believe this beanstem could possibly be the Dark Knight! Further, deponent sayeth not; the awards speak for themselves.

Wahlberg diametrically opposes Bale’s extroversion and brings a studied quietude to a role that demands of him an Eastwood-ian intensity coupled with a Schwarzenegger power behind his shoulders. And his underwear modeling days serve him in good stead – his physicality is explosive. If Bale wasn’t here ass-klowning around, then Wahlberg would have been lauded as this movie’s driver. He’s become a very efficient actor – from annoying New Kid On The Block, to weaning off his baby-fat in FEAR, to the reasonable SHOOTER, to his slap-in-the-face performance in DEPARTED, we’ve seen him grow into this starring role. Well done, my son!

The Gay-For-Wahlberg Express is boarding now…

THE FIGHTER follows the tribulations of Wahlberg’s Micky before he went pro in the mid-80s, as he tries to literally and metaphysically fight his way out of the security zone of his trailer trash environs.

He dates barmaid Charlene (Amy Adams looking voluptuously trailer) and butts heads with his family to accept her – a gaggle of sisters who all look like men and speak like education hasn’t been invented yet; he must constantly drag Dicky out of the crack house; he must contend with Dicky’s jealousy when an agent offers him paid training in Vegas (to raise the money to train in Boston instead, Dicky puts his crackhead girlfriend out on the street hooking); he must contend with Dicky getting in trouble with the law (during one street fight, a cop breaks Micky’s hand); he finds himself at the center of two families – his girl and trainer pit themselves against his trailer siblings and mother.

THE FIGHTER boasts a powerhouse rock soundtrack (Led Zeppelin, Aerosmith, etc.), an inevitable training montage (as Trey and Matt tell us, Even ROCKY had a montage), and boxing scenes as realistic as having your jaw rattled by a roundhouse. We have grown so inured to the fakery of the ROCKY films (and their imitators), where the fighters box without blocking and the punches resound like thunderclaps, that seeing the realistic boxing style of these guys is refreshing. Wahlberg trained for years for this role, and it shows. Where are YOU looking when he takes his shirt off?

Reliable character actor Jack McGee is Micky’s father; Mickey O’Keefe, a real life policeman and friend of the family who trained Micky, plays himself. Now training Wahlberg, which must have been surreal for him.

During the end credits, we meet both real life brothers, Micky and Dicky, and we realize just what amazing jobs Wahlberg and Bale did personifying them. Visually, we immediately recognize who is who, and when they speak, it’s over. What the hell! – give a Best Actor award to BOTH those guys!

When Crackheads Attack.
Let’s get something straight about the difference between this movie and the people that this movie portrays. The MOVIE is excellent. These PEOPLE (the usual salt-of-the-Earth epithet is “they’re good people”) are a bunch of pugilistic rednecks; they’re in a profession that glorifies unprovoked battle – people beating up each other for no reason other than the created reason of income; they’re in and out of jail, their lives revolve around alcohol, drugs and fighting (not necessarily in the ring). When you see the trailers for this Award-winning film, the soundtrack makes it seem like something epic is being achieved. It is not. It’s about two roughnecks who know nothing much about anything else.

The actors’ PERFORMANCES make this movie compelling. We may marvel at Bale, but there are real Dicky Eklunds out here in the world – and I know too many of them. This movie may make them look bearable – but they are called trash for a reason: steal from you for a fix, leave you in the lurch, disappear for days, let you down at every crucial opportunity, no solid phone number, no fixed address, backstab you for rent, for a girl, to further what they believe to be their own retarded progress in life. List their good and bad traits in two columns, and the bad column mightily outweighs the good, to the point you wonder why you ever called them “friend” when empirical evidence shows, in fact, that “they’re bad people.”