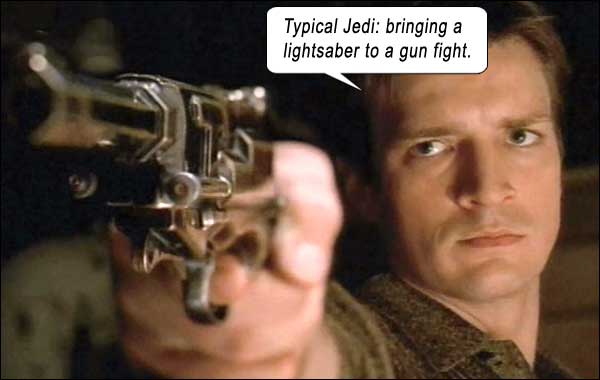 Gorram good – once you get past the rutting cheapness.

Am I that shallow? Do I only dig Nathan Fillion because he looks exactly like the great and powerful Gale Harold from QUEER AS FOLK? Yes, I am that shallow.

Fillion is Captain Malcolm Reynolds, helming a “Firefly class” spaceship named Serenity, five hundred years in the future. And it makes no sound in space. Repeat: no sound in space. For this small aspect alone, we must light a taper and kneel at the altar of creator-director Joss Whedon and praise him for pushing back against 30 years of ignorant filmic indoctrination.

That, and the Gale Harold thing count light years toward the quality of the action-adventure sci-fi series and cult phenomenon that is FIREFLY.

Drawing deep from the well of archetype, Whedon imbues his space-based television series with a Wild West iconography that gives it a familiar roll around the tongue, the 1800’s Zeitgeist lending a unique spin to the space campiness. Snappy writing, colorful characters and a curious juxtaposition of Old World outlaws and technological mercenaries, FIREFLY is chock with Western ‘types’ embedded in our limbic consciousness, yet our heroes live onboard a spaceship (which they call a “boat”); each moon settlement suffices for wild west outpost colonies untouched by civilization and toilets, yet everyone uses a post-modern American vernacular sprinkled with lapses into Chinese; combatants deal in lead, with six-shooters and rifles, yet they can travel faster than light; the priest is supposedly a cornerstone of conscience for the crew, yet the most respected member onboard Serenity is the prostitute!

Interesting that there are no extraterrestrial aliens; no Cantina Sequence or inexplicable mingling of humanoid creatures amongst the pioneer outposts, which happen to be whole planets instead of new lands. Closest thing to “alien” life forms are mutant humans called Reavers, who skulk on the periphery of many episodes, awaiting their chance to swarm in and mass-kill like hillbilly axe-murderers. Creator Whedon knows that just mixing humans from different moons, different cultures, different spaceships, will create enough friction, guardedness and fear, in an untamed galaxy short on medicine, civilization and law. And toilets.

Malcolm Reynolds (Fillion channeling the ironic masculinity and cowboy swagger of Gale Harold) is a loner, a killer, an atheist, a thief (as Jack’s Joker might say, “I like him already!”); an ex-soldier in an ongoing battle against the corrupt government (known as The Alliance – a middle finger to STAR WARS nomenclature).

Malcolm starts out ruthless, mayhemic, not susceptible to the wiles of women, and in it for the money, but steadies as a formidably moral leader as the series wears on, which detracts from the black fun of the opening episodes. The writers were trying to keep him likeable, unlike THE SOPRANOS, where creator David Chase retained Tony Soprano’s ugliness of spirit throughout all six seasons – and either the audience went with him or they didn’t. We realize after a few episodes that Malcolm’s smart-mouthing and devil-may-care swagger disguises a very principled ongoing hero pose.

Malcolm leads a crew that have coalesced around him ideologically rather than militarily; pirates, rebels, outlaws, call them what you will, each with an illicit reason to be onboard Serenity, performing dangerous, illegal jobs and heists which pay their way in fuel traversing the galaxy one step ahead of covert agents and lawdogs alike.

Malcolm’s second is Zoe (Gina Torres), resident Ripley, tough, black, big lips, big eyes and big… guns; this warrior woman was in The War with Malcolm (as one of the soldiers called Browncoats) and would follow him into the heart of any inferno. She is married to the ship’s pilot:

“Wash” (Alan Tudyk), crazy-go-lucky ginger, whipcrack flyboy of the goose-shaped spaceship, with a purdy mouth always ready with a quip, and looking like the Least Likely Renegade – until we meet the ship’s engineer:

Eternally optimistic Kaylee (Jewel Staite), the cutest thing on two legs in three galaxies. And suddenly we all agree that raiding government supplies and selling them on the black market ain’t so bad. Especially when you’ve got the muscle, in the form of:

Ruthless mercenary Jayne Cobb (6’4″ Adam Baldwin – remember his first role as that kid’s bodyguard? Same role); all brawn above the neck, with a ferocious loyalty only to Malcolm – the rest of the crew, dispensable. When Malcolm is stranded, Jayne doesn’t take kindly to Wash assuming control of the ship: “Do you know what the chain of command is? It’s the chain I go get and beat you with until you understand who’s in rutting command here!” Always ready for a fight or a better deal; and if it takes a fight to get a better deal, well, that’s just gravy.

Morena Baccarin is the onboard whore, Inara, whose luminescent smile and firmly-rounded tey-teys compensate for her almost-average acting talent.

Called a Companion, Irina is the classiest and most cultured person on the ship; an independent flesh contractor who can unjam diplomatically sticky situations by openly getting sticky with the elites who need unjamming. In this future, Companions are the most respected members of society – a beautiful turning of a stigma on its head. When the priest suggests “someone respectable” should rescue Mal and Zoe from a colony sheriff, we imagine he is referring to himself – but he means Inara. Joss Whedon presents a society where they’ve got it right at last: whores promote the act of procreation, which is the most beneficial practice of all mankind, while priests are still talking about invisible crap.

Like every blue-balled series that came before it (I DREAM OF JEANNIE, WHO’S THE BOSS?, CHEERS), the eternal question in FIREFLY is: Will Malcolm ever do Inara? You can cut the sexual tension with a lightsaber.

Dr. Simon Tam (Sean Maher) boards the ship with precious cargo. As smooth and naive as a Catholic altar boy (bonus tween alert: Zac Efron plays a young Tam in one episode!), he provides the medical prowess that Malcolm’s ship lacks. His precious cargo is – his sister:

River (Summer Glau), the most annoying character in FIREFLY (besides the priest). Her role was created for some massive overarching subplot, which would reveal her as some kind of superhero in future Seasons, but it was not to be, as FIREFLY was inexplicably cancelled after Season One. Tam rescued her from the Alliance (sinister guys with blue hands – who disappear from the subplot after a few episodes), who experimented on her brain because “she’s ten times smarter than me,” yet all she does is whimper and whine, lapsing into lucid periods where only she knows what she’s talking about, then retreating back into her own head when someone tries to communicate with her. There’s a name for that specific disease: it’s called “being a woman.”

Diametrically opposite to Jayne’s brawn is the supposed “brain” – the priest, which this future society have taken to calling Shepherds, probably because they’ve got the wits of folk who consider watching sheep a challenging task. Ron Glass (channeling BENSON) is Shepherd Book, as sanctimonious a hypocrite as any irrational god-basher walking the Earth today. I hate Book. I know the writers think he is the “conscience” of the ship but everybody already possesses a fine moral compass without his religious poking. In The Train Job, Mal didn’t return that stolen medicine because Book told him to – he made the choice himself; in Our Mrs Reynolds, Mal makes the decision not to molest the innocent girl not because of Book’s intervention – again, his own morals. These are two major moral decisions that are usually entrusted to a priest in lieu of thinking for yourself, but if Mal makes the correct decisions himself – even whilst being atheist – well, maybe he should make good his threats and dump Book on some deserted planet, or better still, in deep space. That’s where those indoctrinaires think their god resides, right?

Zoe doesn’t need Book – Malcolm is her god; Wash doesn’t need Book – flying the ship through heaven doesn’t need prayer, just three switches and a lever; Jayne’s morality is based on Might is Right. And Kaylee? Like she needs to be any nicer. And the hooker is legal and proud. Doc Tam doesn’t need Book because all doctors are God; and River takes the time to correct irrationalities and contradictions in Book’s bible, for which Book only has mealy-mouthed platitudes in retort. She tells him, “It doesn’t make sense!” He replies, “It’s not meant to make sense.”

Even though these closeminded god-bashers claim to be “searching for Truth,” it looks like 500 years in the future they still haven’t opened their eyes to see it: No one needs you, priest. No one ever did.

I rest my case, yeronner. 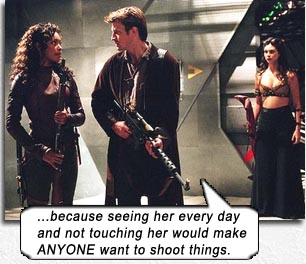 Though it is lauded by critics and fans, FIREFLY takes a few episodes to grow into your bloodstream, and I’ll tell you why: It looks cheap. It IS cheap. It’s a television production with grandiose ideas that cannot be realized on the small screen with a G-Rating and an F-budget.

I’d guess that everything good about this show – from its depiction of the imperfect societal structure, its nod to terraforming, its reference to Earth-That-Was, to its colonial soundtrack – was the writer-director’s choice, and everything that was a failure was an executive choice.

For example, the very first episode (Serenity Part I) opens amidst a ground battle that looks like someone collided in a hallway and mixed up the reels of a western, a WWI movie and BATTLESTAR GALACTICA. And who are all these beige extras whom we fear might actually be the stars of this series? And is that Gale Harold? The “explosive” opening didn’t introduce the characters with any impact or clarity – and we would learn that director Whedon didn’t approve of this opening, but was overruled by “executives.” And what were they hoping to achieve? After the authenticity of SAVING PRIVATE RYAN, you’re not impressing anyone with those $10.50 explosions and smearing poo over everyone’s face to imitate bloodied mud. Consequently, we are not introduced to the characters, we are introduced to cheap battle.

And when the series aired (September 2002), the execs once again brought their mindless, ponytailed authority to bear on the writer-director who gave them the successful BUFFY THE VAMPIRE SLAYER series, and decided not to trust his running order, instead airing the third episode first, The Train Job.

Look past all these obstacles that the ostensible minders of the show put up and you will be rewarded with an intelligent, witty, slightly askew science fiction ‘verse. All this and Gale Harold as well!

A slapstick tone, featuring red-headed bombshell Christina Hendricks, who reminds us of Bryce Dallas Howard in THE VILLAGE, except with much bigger mysterious beasts. If Hendricks is not showing off those gargantuan godzillas for money, I’d be very very very surprised – bet I can pull her up right now online…
EPISODE: Out Of Gas

We don’t realize how much we actually like these characters until this episode, which presents us with the near-death of all the principals, Malcolm stumbling wounded around his deserted ship trying to connect an engine part as he runs out of oxygen; a superbly-written episode that interweaves three timelines (including a narrative where we see a young Malcolm assembling his reprobate crew).
EPISODE: War Stories

In this episode (that bears more than a passing resemblance to SEVEN SAMURAI/THE MAGNIFICENT SEVEN) Malcolm at last gets his aching pistol whipped by Nandi (Melinda Clarke), the madam of the outpost whorehouse who sought his aid. I was so glad, because this man’s man was starting to look a little gay around the edges as he continually avoided sipping from Inara’s chalice. And what can one say about Nandi? Having grown inured to Inara being the resident hooker, we forgot what a REAL hooker looked like – Nandi reminds us. In Italian parlance, now this was a hoo-er!