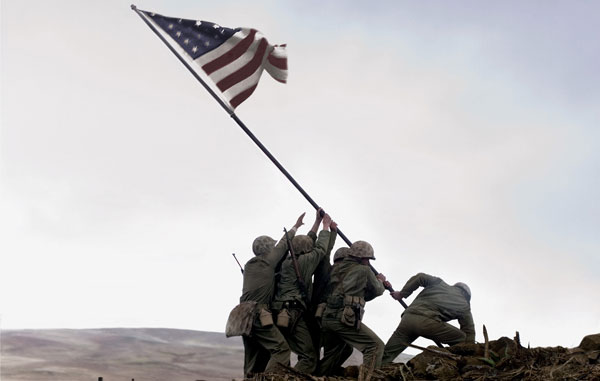 Raising Glory: the sham behind the glam.

When the legend becomes fact, print the legend.
– Reporter, THE MAN WHO SHOT LIBERTY VALANCE (1962).

Director Clint Eastwood‘s waving-flag film is, ironically and thankfully, the farthest from a Flag Waving maroon-necker as a post 9-11 American movie can be. When I learned of this film’s production last year, I admit to fears that the apolitical movie-making maverick, Eastwood, might have succumbed to public consensus in his autumn years, opting to go the cheesy route of delivering unto the knee-jerk patriots a red-white-and-tried-and-true formulaic, Old Glory-salutin’ burbler.

Instead, FLAGS OF OUR FATHERS explores oft-neglected truths behind the accepted legends surrounding the most famous photograph of World War II – Joe Rosenthal‘s shot of six soldiers on February 23, 1945, raising the stars and stripes on a steel pipe atop Mount Suribachi on the sulfur-sanded, Japanese Pacific island of Iwo Jima (transl. Sulfur Island). 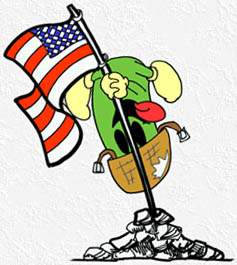 Poffy flies it upside down.

Movie’s opening monologue is brutally delicious: “Every jackass thinks he knows what war is – especially those who haven’t been in one” – taunting the movie itself to be not just intelligent, informative film-making, but a jagged, bile-inducing horror canvas of killing atrocity; it now has to show us what it accuses others of misapprehending. The speaker goes on: “Heroes and villains are not who we think they are…”

Up to this point in film history, Steven Spielberg (who co-produced FLAGS) has held the championship belt for the most realistic war experience purveyed on celluloid, with the tendon-slicing grit of his SAVING PRIVATE RYAN (1998). But FLAGS OF OUR FATHERS, in its combat savagery, out-Ryans RYAN, with Spielberg’s producer palm prints a dead giveaway in this film’s ashen, shrapnel-sharded battle scenes, filmed in khaki grays and greens, with the visceral clout of a hammer to the kneecap.

FLAGS follows flag-raisers John “Doc” Bradley (Ryan Phillippe), Rene Gagnon (Jesse Bradford) and Ira Hayes (Adam Beach, in an Oscar-nodding performance) prior to their flag-raising and after their herded return to the States to sell War Bonds on FDR’s 7th Bond Tour. Along with Barry Pepper (straight out of RYAN) as Sergeant Mike Strank, Robert Patrick and Neal McDonough as ranking officers and Paul Walker in a small role (where he uncharacteristically doesn’t make an ass of himself), the courage of this film is not in promulgating yet another saber-rattling hero-fest, but in its depiction of the flag-raisers as unremarkable to the point of mediocrity. Their fates were as mundane as their military careers might have been had they not accidentally been in that photograph – in an age before this television culture which elevates morons and mass murderers to cult status (Kato Kaelin, Paris Hilton, Charles Manson, Timothy McVeigh, George W. Bush – who counts as both) Bradley, Gagnon and Hayes could not parlay their celebrity into lucrative post-military careers, Bradley becoming a funeral director, Gagnon, a janitor, and Hayes – a Pima Native American, disillusioned and disgusted with the military’s hypocrisy and duplicity – a heartsick drifter until his death from alcoholism.

They were great men – but only from a certain perspective.

What eventually brings a tear is not the “patriotism,” “heroism” or flag-raising, but the lies, hypocrisy, bigotry and pain that the “heroes” were made to endure when their lives were overtaken by the war and exploited for nationally endorsed murder.Screenplayed by William Broyles Jr. (CAST AWAY, APOLLO 13) and Paul Haggis (MILLION DOLLAR BABY), from the book by James Bradley (son of flag-raiser, John Bradley) and Ron Powers, FLAGS is yet another Clint Eastwood movie dealing with the nature of Heroism, but not in that childish aspect American war movies have adopted to mollycoddle the simple-minded populace who now lump every American involved in foreign conflict, however tangentially, a Hero. Rather, Eastwood dares to purvey that there is no inherent heroic action, that “heroes are something WE create,” portraying the flag-raising as the inadvertent milestone it actually was. Yes, American troops ultimately plan to raise a flag at the highest point on any battleground, but the U.S. Iwo Jima forces attained the summit of Suribachi so quickly (four days after their beach landing) that the raised flag – though a source of inspiration for the troops pinned around the island by Japanese fire – was more a premature declaration of victory (the battle would last 31 more days) than the definitive killing stroke it was sold as to the American public.

We are made privy to the nondescript raising of the first flag (which was replaced due to a ranking officer wanting to “pin the original to his bedroom wall”) and then to the equally-nondescript second flag raising, which is Rosenthal’s laurel. Rosenthal, who climbed the mountain after another photographer had already shot the first raising, thinking he had missed the actual “great” moment, almost missed the second raising too, as he hastily snapped the photo that would become the “single shot that could end the war.”

Though there is the barest shadow of uplifting music during this moment, it is not manipulative or tear-jerking; it is as controlled as all Eastwood’s directorial efforts. (The film’s main theme was once again composed by Eastwood, whose confidence in his simple, single-note themes knows no bounds – he is, after all, The Clint, and who would dare tell him his compositions are unfit for his own movies? Clint himself, in his uncertain voice, sings the opening song, or more correctly, pencils it in, in an a cappella whisper.)

Rosenthal’s photograph became a government tool to leverage revenue from the gullible masses, duplicated profligately on posters, stamps, statues, ice cream shapes, etc. as a symbol of American victory – a fiction abetted by the disdainful politicians who marketed the snapshot soldiers like inanimate products. (Because there were no faces apparent in the photo, the soldiers’ identities were often questioned, and eventually became moot, as long as mothers of dead soldiers could believe their sons were raising Glory.) The “heroes” themselves were the last accommodated cogs in the war machine that exploited their celebrity for its own agenda.

“Heroes and villains are not who we think they are…”

The Japanese who attacked Our Heroes physically may have been villains during Iwo Jima’s battles, but the U.S. government that abandoned these “heroes” after exploiting them to sell billions of dollars of war bonds will forever be villains.

Though the hero-ship of the flag-raisers may have been ephemeral, the corporations drooling to exploit them at the height of their popularity, who turned their backs after wartime fervor cooled, will remain villains for many lifetimes.

And though Hayes wept over his buddy, Mike, being the “real” hero, in a flashback we see Mike viciously dispatch a cadre of Japanese infantry alone, as Ira looks on pale-faced, as if watching Leatherface eviscerate a bunch of teen models. Though it may be a rewardable feat, it was anything but pretty – and decidedly not heroic.

A disturbing scene encapsulates the dichotomy of war that brings “heroism” into question: a medic tries to save a man whose guts are spilling out, whilst twisting his knife into the guts of an enemy beside them. And if that still seems rational to the knee-jerk patriots, how to rationalize the abandonment of a Marine who falls overboard during the journey to the battleground? At first, his mates banter over his clumsiness, until they realize the miles-long armada of battleships is going to leave him to die in the brine rather than impede their killing schedule by rescuing him. As one soldier grimly observes, “So much for No Man Left Behind.” The longer we contemplate war, the more blurry the line between hero and villain…

Clint: Keeping it real for patriots, peaceniks, warmongers and jarheads.

The real killing stroke of this Iwo Jima tale is that it is only half-told – it is no secret that Eastwood is making the rejoinder/companion piece, LETTERS FROM IWO JIMA (aka RED SUN, BLACK SAND), which is an account of the same battle from the perspective of the Japanese. Not since 1970’s TORA! TORA! TORA!, which utilized American and Japanese directors for its respective cultural sequences, has there been a film project this ambitious.

How could we revisit those melodramatic Kirk Douglas and John Wayne movies of yore when stormbringers like RYAN and FLAGS come closer to showing us jackasses who have never been in war what war is, more so than the generation who were in the war gussying it up with movie stars, love stories and “heroic” spackle to hide the true horrors. While thirty-something recruits in clean shirts storm a stock footage beach in John Wayne’s maudlin, Oscar-nominated SANDS OF IWO JIMA (1949), Eastwood’s troops in FLAGS – as fresh-faced as WWII recruits must have truly been – are flesh-shredded in the most gruesome manner imaginable – “gruesome manner” sometimes being nothing more than getting shot, but in this grounded movie, getting shot is not simply “falling over and pretending to die” from unseen wounds – as they do so unconvincingly in SANDS – but being shattered by a demolishing projectile that jarringly negates life. War is Hell, not Hollywood.

The movie leaves us with an ambiguous definition of “hero” – as always, Eastwood asking us to decide for ourselves – as the flag-raisers cavort on Iwo Jima’s beach in a stolen moment of elation after their flag-raising. Eastwood’s characteristic pan back from the final scene is one of his most powerful, as the camera takes in the beach boys, then the black mountain, to the flag atop Suribachi, widening its scope to include the armada of battleships strewn to the horizon.

FLAGS OF OUR FATHERS wisely eschews the insufferable “Based on a True Story” tag at film’s opening, yet touches on more corroborated facts than most acclaimed biopics, the closing credits featuring real pictures of the Iwo Jima tableaux, including the flag-raisers themselves, ironically reminding us that this fiction pertaining to Iwo Jima’s Flag Shot is closer to fact than all the propaganda swilled during its actual occurrence.

The grandest irony is that Rosenthal was rejected as a military photographer for poor eyesight and went to work for the Associated Press – where he took the most famous military photo of all time.