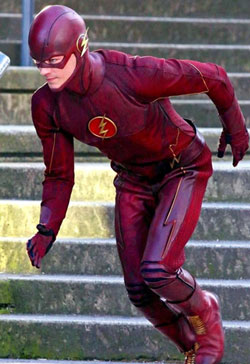 The Wimping Of A Superhero.

Slogan: “The Making of a Superhero.” But the story itself wimps out the Fastest Man Alive at every turn.

Grant Gustin (GLEE) is DC comicbook superguy The Flash, aka Barry Allen (represented here as younger than his comics version, which makes us wonder how many years you don’t have to study to become a police forensic expert, which is Barry’s seemingly veteran job, even though he looks like an embryo). Grant’s got that penciled-in face that only a Jonas Bros. fan could love, and he hits all those Hero-Overcomes-Adversity beats that separate the car commercials, in this average, glazed-eyed origin tale.

But there’s one beat that no one who read the original Flash comics could have seen coming: the “Just Friend” beat.

Candice Patton is Iris west, Barry’s love interest. (Not so much ‘love interest’ as ‘cocktease.’) Barry was adopted by her father when very young, so they grew up together. Now they hit that beat: “I’ll Still Be Your Friend Even Though I Make Out With My Boo Right In Front Of You Then Ask Why You Look So Down.” 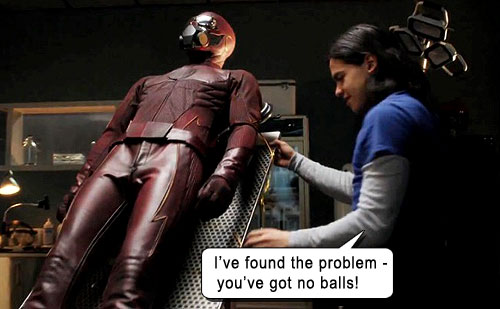 As a comics-conscious cucumber, the Flash was one of my favorite superboffos. His powers developed from just running fast to being able to control the ultrasonic vibration of his molecules, vibrating through solids, walking on water, running on air; just about anything short of Superboff hisself.

THE FLASH shows us how Barry, as a police forensic scientist, is doused with chemicals during a lightning storm, and attains his super speed. Over the course of this series he would gradually discover the extent of his powers, aided by a completely manufactured (i.e. not from canon) teen geek squad headed by oldboy Tom Cavanaugh. Danielle Panabaker annoys us as the clinical fembot and Carlos Valdes annoys us by looking like Taylor Lautner with a brain. They monitor Flash’s powers and missions, and search for… numerous “meta-humans” created during that lightning storm that created Flash! Each with a different “power.”

So the series writers have set it up nicely, with the potential for a wealth of villains ergo episodes. Akin to the original Rogue’s Gallery in the Barry Allen series of DC comics. And uh, not one of those fried dim sums said to themselves, “Hey, I could use this unique power to fight crime instead of do crime”?

Maybe the crimefighter costumes were not butch enough. It’s a good job Flash runs so fast – onlookers describe a mysterious “red streak” around Central City – or people might get a load of how gay his costume really is.

John Wesley Shipp (who played The Flash in the lame 1990 series) is Barry’s father here; falsely imprisoned for killing his wife during a lightning storm when Barry was a boy. Barry swears he saw a figure within the lightning, which underpins a motivational throughline for the series: Barry trying to find his mother’s killer.

The most touching relationship is between Barry and his stepfather, Detective Joe West (Jesse L. Martin, the TV version of Idris Elba). It’s the old You-Can-Dooo-Eeet trope, but it swells a tear if you’ve just taken your female hormones.

Production values on the superspeed scenes are visualized well, but how exactly does our scarlet speedster get beaten up by a villain if he can see everything moving as if in slow motion? If he can dodge a bullet, why can’t he dodge a fist? Wimp.

The first Flash was Jay Garrick (created 1940), but to me, the greatest Flash was and always will be Barry Allen (created 1956); unfortunately, the CW are kinda portraying Wally West here (created 1959), ’cause this guy sure is a wally. I don’t even think I want to know what goes into making him a superhero…

How about we stay Just Friends? 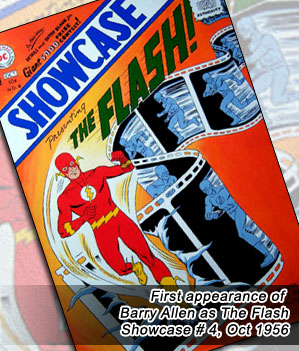