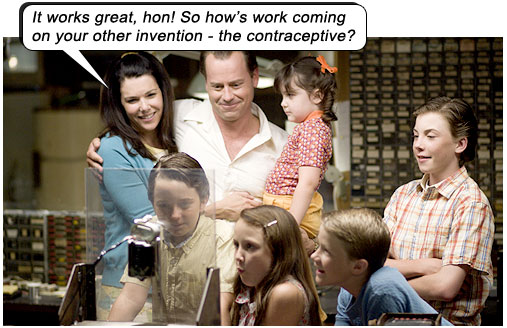 The David versus Goliath story – with David wielding an Intermittent Windshield Wiper.

Antonio Meucci, Jerry Siegel and Joe Shuster, Alfred Russell Wallace – all these men had their ideas stolen, only credited years, decades after their ideas had entered the fabric of society under other mens’ names: the telephone, Superman, evolution…

Who knows how many such men and women there have been over millennia? The nature of ideas is so amorphous, so inscrutable; “Steal from one man – that’s plagiarism. Steal from many men – that’s research.”

FLASH OF GENIUS shows us one of those millions who had his idea stolen, and his principled battle to regain credit for that idea: the intermittent windshield wiper.

Hard to believe this function once did not exist – but back in the late 1960s, when all windshield wipers only went OFF and ON, college professor and tinkerer, Robert Kearns (Greg Kinnear, whom we meet – not coincidentally – lecturing on Ethics), hit upon the idea for the “Blinking Eye Windshield Wiper” (with “variable dwell” – that expression kills me!), a wiper that would function like the human eye – whenever it was necessary.

He patents the invention (his “Mona Lisa”) through his good friend, Gil Privick (Dermot Mulroney), who owns an auto dealership. He and Gil shop the Blinking Eye to Ford in Detroit, who promptly steal the idea. Because they’re a corporation and thus Bad Guys.

So begins Kearns’s obsessive, decades-long battle, not for money, but for the right to call the invention his; for Ford to admit their outright theft of his patent. In a cute little irony, long before he went head-to-head with Detroit corps, Kearns called his brood of six kids, “The Board of Directors.” In a sadder irony, his wife (Lauren Graham) leaves him because with all his time spent on the court case, he was neglecting his kids – the same kids who would years later all end up clustered in his little apartment, helping him win his case!

Alan Alda enters the equation briefly as Gregory Lawson, a power lawyer for Kearns, but when he forces a settlement from Ford and Kearns won’t accept it unless Ford also acknowledge they stole his idea, Lawson is outa there, but not before warning Kearns of the difference between principled and pragmatic, “Time means nothing to them, money means nothing to them – they will bury you in countersuits, motions, delays; five years from now, you won’t be closer to a resolution. Your hair will turn gray…”

In court, Ford Corp (represented by CEO Mitch Pileggi, among others) claims the idea for an intermittent wiper was in the works anyway and Kearns simply put a few common components together to finalize the design.

Ford would offer Kearns higher and higher sums of money, through their lawyer who looked like a gangster, Charlie Defao (Tim Kelleher), eventually offering 30 million dollars to drop the case, which Kearns and his grown kids (now truly acting like a Board of Directors) refuse – on the grounds that the settlement still did not come with an admission of theft.

Well-paced, well-acted, frustrating, inspiring, poignant, FLASH OF GENIUS is a testament to the power of principles, yet a warning as to the cost of holding onto them with white knuckles. Kearns’s family life was destroyed, he suffered a mental breakdown and was in a sanitarium for a brief period.

Of course Kearns wins – in the usual manipulative inspirational music swell during the court decision – or this movie would not exist. But it is unfortunate that Kearns’s fight did not help the plight of all Inventors. We are all aware of those modern clauses in corporate contracts that claim everything from every individual as attributed to that corporation. There are no real inventors left, no single men allowed to claim that flash of genius. Humanity has been swallowed up by The Man.

Robert Kearns was one of the last Real Men to fight The Man, squandering his life to retain his Humanity. On variable dwell.