Note to director Peter Markle: if you’re going to create a tribute to nobodies who become somebodies due to an airline tragedy, if you’re going to grease the wheels of racism and jingoism with agitprop, if you’re hoping to effectively manipulate and exploit the charged emotions of a nation’s populace – don’t use a toy plane for your exterior shots! 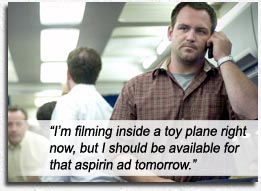 Chronicling the events that might have occurred onboard United Airlines Flight 93 on September 11, 2001 (the flight that Al Qaeda probably refer to as “the one that got away”), the television movie FLIGHT 93, written by Nevin Schreiner, has all the earmarks of media created for inserting aspirin ads between: television actors vying at Oscar nods for their crying scenes, unnecessarily unsteady handheld camerawork to compensate for the small-screen lack of verve, all the characters from upper middle class neighborhoods, cherishing their idyllic lives of whimsy—-

FLIGHT 93 is a far cry from the distanced objectivity and smooth tension of Paul Greengrass’s theatrically-released UNITED 93 (Apr 2006). FLIGHT 93 is less a document on what might have transpired that day as what Americans would like to have transpired, to paint their dead relatives as red-white-and-blue as possible.

This jumble of crassness would retain more credibility and tragedy were it not for the insistence of the media and families of the deceased in forcing the mantle of “hero” onto the departed, and disparaging anyone who would challenge their re-wrought aesthetic on heroism.

In a society that defines its heroes by the number of touchdowns or home runs they score, it becomes second nature to endow that appellation on people actually doing something worthwhile, like battling for their lives (despite the fact that that’s tangential to heroism).

The current definition of heroism now encapsulates twenty guys rushing one teenager with a box-cutter and a fake bomb, and after discovering the bomb to be fake, still beating the teenager to death – heroically, of course – with no trial. (Whether this happened or not, we will never know, yet the knee-jerk vengeance perpetrated in the film is applauded.) A hero can also be defined as someone remaining in their seat and whimpering, as many of the women did. And in blanketing everyone onboard Flight 93 as a hero, I guess that includes the pilots and passengers who were stabbed to death before the action even got underway, whose only contribution to the cause was, “Hey, wait a minute – urk!”

And anyone who doesn’t acquiesce to terming these people “heroes” is a terrorist themselves. That’s mighty white of America.

Say what you will about the terrorists (I’m sure you do), but they brought a certain unity to families that day – let’s face it, any factor that compels that many people to say “I love you” to one another, must be doing something along the lines of Christmas – that’s the only other time you’ll hear so many insincere sentiments, expressed because “it’s the right thing to say” in deference to the circumstances. After the fiftieth love proclamation (ten Chick Flicks back-to-back don’t have this many love proclamations), one could assume that tear-jerking device was wearing thin, but Markle and Schreiner are intent on visiting every single passenger’s clean home and well-groomed family unit to stress how monstrous this—-

Insufferably intrusive music, by Velton Ray Bunch, blankets everyone’s Long Goodbye and is used solely to manipulate your Weeping Nerve. A strange, repetitive music effect accompanies the Flight Control Center scenes, which made me want to shoot the TV.

Even whilst denouncing it as exploitation, this is exactly the type of biased, redneck media that America thrives on; a culture which takes anything educative, empowering, enlightening, tragic or morbid and turns it into mindless B-grade “entertainment.” Whilst the Towers were still upright and smoking, somewhere in Hollywood, a movie exec’s amoral mind was ticking over with shot angles and how to pitch this disaster as a theatrical release, while a television exec’s mind was simultaneously projecting how much advertising time he could sell during a Movie of the Week based on this calamity. Doubt this? Here’s the evidence!

United Airlines Flight 93 was a tragedy, yes. Unnecessary, yes. If you want to think of your lost love as a hero, do so. Don’t try to force me to do the same. That’s what got us into this mess in the first—-