Ripping Musical Yarns from slightly to the right of Down Unda.

FLIGHT OF THE CONCHORDS is Tenacious D without the raunch – but just as much a spank in the groin. That is, it will leave you breathless from laughing so hard (and you may have cracked a nut). 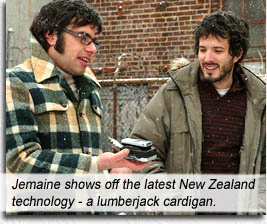 Jemaine Clement (guitar/bass/vocals, Jagger-cool in his handsome ugliness) and Bret McKenzie (guitar/vocals, deadpan, unperturbed, who would look 12 years old without his beard), the novelty two-man band from New Zealand (funny accents and all) parlay their comedic stage act into a quirky New York situation comedy that perfectly captures their onstage minimalistic, unassuming quasi-style.

Within the context of their search for acceptance, purpose (and gigs) in a New York City apathetic to their presence, all their classic musical routines are cutely inserted: Boom Boom, The Humans Are Dead, Business Time, Rhymenoceros and Hiphopopotamus – even Albi the Racist Dragon. For fans of the band, it is quite amazing to see how they’ve found nice little slots for all these funny songs, most of which are re-worked with full band backing.CONCHORDS music is folk, rock, electric, acoustic, hip-hop, anything that correlates with the topic of the episode, stylistically ranging from Hall and Oates, to The Monkees, to Pet Shop Boys, Bowie and beyond. And Episode 6 (“Bowie”) shows off their genius in melding Bowie’s many styles into a brilliant musical parody, with Jemaine appearing to Bret in dreams as David Bowie from different eras. Bret: “You look like Jemaine.” Jemaine replies in that airy, offhanded manner of The Thin White Duke: “No, I’m David Bowie from the Ashes To Ashes video.”

For two characters who are so inept at everything (finding jobs, chasing girls, paying the rent), their virtuosity as comedic musicians is unmatched (well, maybe by Tenacious D in a different kind of way).

Kristen Schaal is Mel, their obsessive Number One Fan (actually, their only fan, on the verge of orgasm every time she is near them, or stalking them); Arj Barker is Dave, their friend from the pawn shop, who offers sage advice on women and life, both of which he knows nothing about; Rachel Blanchard is the beautiful, yet California-shallow Sally; Sutton Foster is Coco, Brett’s occasional girlfriend, considered “Yoko” by Jemaine.

No one trailer can do justice to the diversity and hilarity of the FLIGHT OF THE CONCHORDS series. All twelve episodes of Season One are indescribably different, yet incredibly consistent in tone and humor.

The plots of their nominal “adventures” are nothing we haven’t seen before in other musical comedies (a member leaving the band, the band splitting over a woman, one member moving out of the apartment, a new band member causing a rift between the original band members, etc.) but CONCHORDS presents these tried-and-worn plots in their own inimitable, groin-spanking way.

Watch with a cushion covering your jewels. And stop touching those monkeys.