The Conchords still Rock the Party.

Can the frazzled lightning of FLIGHT OF THE CONCHORDS ever be re-captured in that bottle? In their second HBO season, Bret McKenzie and Jemaine Clement, the eclectic musical parody duo Flight of The Conchords, return with a passion. And a lightning bottle. 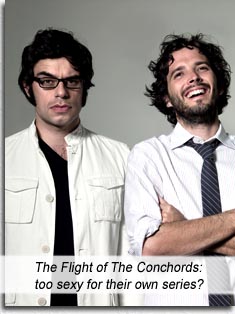 Second Season takes one full episode to take flight, starting out a little self-conscious. For the Conchords duo have fallen into that age-old trap of having portrayed out-of-luck guys when they really were – who achieved massive real life success – then had to go back to playing out-of-luck guys again. Knowing that they are not.

FLIGHT OF THE CONCHORDS now have the same good problem that Tenacious D had as a parody act. When The D called themselves “The Greatest Band in the World” at a gig with four people in the audience, it was the greatest gag in the world, but when they reach the Brixton Academy, London, and an amphitheatre of people is agreeing with them, the joke becomes too ironic to deconstruct. So too, when Jemaine and Bret entreat, “Who wants to rock the party?” the correct response should be dead silence. In the episodes, we still see that, but we know that on the live stage, the response would be deafening screams. That ain’t right.

No matter how many women DON’T wanna be with you on your TV show, every woman watching your TV show DOES. All this informs our enjoyment of Season Two.

Season Two opens (Ep 1, A Good Opportunity) by taking us out of our Conchords Comfort Zone by making incompetent manager Murray (Rhys Darby) a success. The gold records from his managed band, the Crazy Dogggs, have catapulted him into a high-vaulted office overlooking New York, with our favorite out-of-luck folk band firing him as manager. The dynamic we were accustomed to is lost in this first episode. Betwayed!

By Ep 2, The New Cup, CONCHORDS attains the level of casual absurdity and hilarious incongruity that defined Season One.

As eclectic as they were in Season One, incredibly, The Flight of The Conchords extends their musical range in Season Two – to classical opera (Murray sings the first song of the season in full-throated tenor), Meat Loaf-styled cheesy rock opera (Ep 6, Love is the Weapon of Choice), New Romantic techno (Ep 8, Newzealandtown), and even karaoke in Chinese! (Ep 7, Prime Minister.)

Standout tracks: Too Many Dicks (Ep 5, Unnatural Love), Sugar Lumps (Ep 2, The New Cup), We’re Both In Love With A Sexy Lady and Epileptic Dogs (Ep 6). And all the surrounding characters get a stab at lead vocals, including their imbecilic pawn shop friend (Arj Barker) to their obsessed fan (Kristen Schaal).

Jemaine and Bret really get their kicks into the guts of Aussies at every hilarious opportunity, the Aussie accent being, “an evil version of our accents”; the Aussie one-night-stand a shallow heartbreaker; the Aussie embassy a bunch of bullying arseholes. But that’s okay. New Zealanders only get so competitive because they know we Aussies are superior (!).

Before we know it, SEASON TWO is over – there are only ten episodes. Season One was constructed around songs which The Conchords had performed for years. Season Two scaled the heights of Season One with all-new songs, a Herculean effort. Then they themselves expressed doubts about a third season, because I don’t think the marketers who are harassing them for the product realize how much incredible creativity goes into a CONCHORDS episode: yet more all-new songs, in intriguing arrangements and styles, constructed around all-new adventures.

How much can FLIGHT OF THE CONCHORDS still rock the party? A lot. But don’t tell anyone. That would be the entirely inappropriate response.