Phoenix rising from the hashes.

Remake of the classic 1965 Robert Aldrich film of the same name, John Moore directs this FLIGHT OF THE PHOENIX with a slick, severe spank, yet fails to conjure the tension and desperation of the original. We can pinpoint the exact moment it fails: OutKast – “Hey Ya!” Yes, that “Hey Ya!” – that song you can never get out of your head once you hear it. In the middle of the Gobi Desert, while their lives hang in the balance, the full crew of a downed airplane get jiggy with an iPod playing “Hey Ya!” It sounds ridiculous on paper – and reads twice as ridiculous on film. 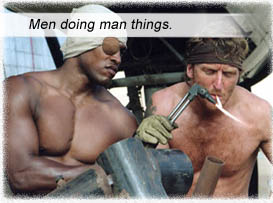 Not that there’s anything wrong with the song, but it’s the only piece of source music amongst the otherwise tension-soaked soundtrack; inserted at a point where the marooned passengers unite psychologically as – heh heh – outcasts (Ohhh, I get it! These filmmakers are so clever-clever!). And the marooned strangers from all walks of life collectively shake their moneymakers and laugh and joke and dance and hammer in unison like the Seven Dwarfs and I feel dirty even describing it.

And this sequence takes us so far out of the movie that it makes this phoenix look like a dodo.

Other than that singular out-of-body moment, Lukas Heller‘s original storyline is intact, of the clutch of motley characters crash-landing in a desert (Gobi instead of Sahara) and rebuilding their plane to escape, under the tyrannical auspice of one of the passengers who claims to be an aircraft designer. Also retained is the mighty climactic twist of exactly what type of aircraft designer he is… Which means that all the good aspects of the movie are someone else’s ideas. This PHOENIX has exemplary production values, so all they had to do was Not Add Dumb Stuff. Or OutKast. Guess everyone didn’t get that memo.

Dennis Quaid is Captain Towns, the rugged all-American pilot; Tyrese Gibson, his first mate. Their passengers are a group of oil-riggers and civilians from an oil rig shut down by corporate decree. Miranda Otto (RETURN OF THE KING) is a bit too slight of frame and feminine of nature to be believable as the chief rigger (more like Equal Opportunity Casting; just a little too slim and milky-white to be here without the threat of gang-rape – I mean, what more excuse are you guys waiting for?); Jacob Vargas represents the Mexican contingent; there’s the Irish guy (Scott Michael Campbell), the gangsta (Sticky Fingaz), the Middle Eastern guy (Kevork Malikyan, pandering to that new demographic that rose to prominence after 9/11) and even the Corporate peacock (Hugh Laurie) who understands Middle Eastern languages and golf.

And Giovanni Ribisi creates the most memorable character in Elliott the ambiguously-Euro “aircraft designer,” with his overbearing principles, pragmatic nerdism and ducky voice. It’s the best performance of the film. Every time he says, “Captain Towns” in that adenoidal bleat I’m laughing. His alpha struggle with Quaid is the sole reason this movie has any legs.

In the 1965 PHOENIX, James Stewart’s crew experienced psychological and physical hell to build their escape vehicle. Apparently that’s not enough in 2004, where the unnecessary drama of crazy Mongols has to be added, with a silly ticking clock chase sequence to put a Hollywood cherry on top of the climactic takeoff. Pandering to the demographic that needs all that superfluous silliness, there are explosions and a gun fight (and I’m sure there would have been a polar bear battle if idiot execs had their way), and when Fingaz wants to attempt walking across the desert, the crew describe the terrible things that could happen to him and show us the fantasy visuals like some kind of ’80’s music video. Have they forgotten we viewers have an imagination?