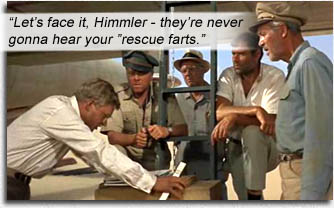 A cargo plane carrying a handful of military personnel and civilians crashlands in the Sahara. No radio contact, 130 miles off course, with no rescue prospects, food and water for eleven days… One of the passengers claims to be an aircraft designer and outlines a plan to rebuild the plane from its remaining parts. Thus their simultaneous hope and damnation begins.

Classic premise, moved from a desert island to just a desert.

Written by Lukas Heller and Trevor Dudley Smith, FLIGHT OF THE PHOENIX is a unique little gem, directed by Robert Aldrich, who would go on to direct the classic testosterone war film, THE DIRTY DOZEN (1967), but unfortunately also has the lamentable APACHE (1954) to his credit.

Hardy Kruger is German designer and taskmaster, Dorfmann, who maintains he has worked out all the drag coefficients and stress factors for a rebuild; James Stewart is cantankerous American leatherneck pilot Towns, who has “flown every crate ever built,” and disagrees with Dorfmann on just about everything, imbued with that American idealism that all it takes to be right is a good left hook and an unwavering belief, against all evidence, that he is right. Richard Attenborough is Towns’s co-pilot, Lew, the mediator between Dorfmann and Towns.

Flight of the Frosted Fruit Loops

Peter Finch (long before he was mad as hell) is a British officer who believes he can walk across the desert to safety; Ernest Borgnine is a big baby, diagnosed as “mentally incompetent”; George Kennedy is along for the ride, Ian Bannen is the jovial Scottish bigot.Each character is well-defined and their clash of personalities, ideologies and solutions is what makes PHOENIX such compelling viewing; the tension is palpable, first on whether the men will survive, then during the inevitable disputes that arise over water rations, blame for the crash, leadership, whether to waste their few days striving to build a plane that might not fly, overarched by the classic he-man struggle of alpha leadership between Towns and Dorfmann.

Like the mythical bird that rises from its ashes, one of the men christens the rebuilt section of plane “Phoenix” by painting its name on the fuselage.

Dorfmann is a pragmatist and oversees the Phoenix re-building like a machine, factoring in unemotionally that one of the injured men is going to die, so will not need any more rations and needn’t be figured as payload along the wings; while Towns regards all his passengers as humans, who should all strive to be alive at the end of their goal for their goal to mean something. Lew helps Towns find the compromise – that allowing the men to work on a goal will give them morale and turn them into survival machines.

Amazing that amidst the scorching expanse of desert heat, we yet feel such claustrophobia; as the sands close in, as their rations run out, as the makeshift aircraft is pronounced ready for takeoff, Towns and Lew discover Dorfmann was not lying when he said he was an aircraft designer… he just left out a key fact about what type of aircraft he was a designer of.

It is such an astounding twist to the plot that Lew echoes all our emotions by belly-laughing and weeping at the same time, “We could die here – or we could die in that thing…”

Things could be worse: they could have been in ISHTAR.