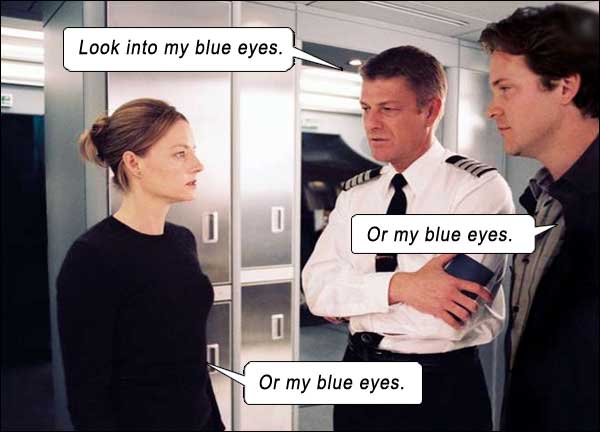 BOARDING OUR FLIGHT: Good evening, ladies and gentlemen; our FLIGHTPLAN for this journey involves aircraft designer Kyle Pratt (Jodie Foster), whose life in Europe has been jarred to a halt by the accidental death of her husband (she swears he “fell,” not jumped), prompting her to return to the United States with her six-year-old daughter, Julia (a somber Marlene Lawston in her first film role). Since this plane was designed in part by Kyle Pratt herself, we are telegraphing that she will soon be shimmying confidently through our crawlspaces and wreaking havoc with the avionics. For now, please observe the safety belt signs. We should be cruising at an altitude of suspense, coupled with paranoia. 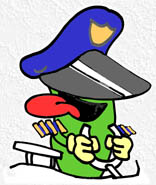 TAXIING FOR TAKEOFF: The night before the U.S. trip, director Robert Schwentke purposefully blurs the line between Kyle’s fantasies and reality, for both her and us; add cutaways of her last, oddly-mysterious moments viewing her husband’s coffin before shipment onboard this flight to the U.S. – and something smells not quite kosher. Inflight movies will be THE LADY VANISHES and MURDER ON THE ORIENT EXPRESS.

ENGINES GUN A POWERFUL TAKEOFF: In flight, Kyle and Julia stretch out to nap. Kyle wakes. Julia is missing. The premise is running on maximum thrust now. Please remain calm while the crazy lady belts about the cabin…

CRUISING AND BRUISING: Flying high on Foster’s adrenalin alone. As Kyle’s helplessness and desperation mount in her search for her missing daughter, subsidiary characters enter the chaos of her spiraling paranoia, all maintaining that they never saw Kyle’s daughter to begin with – Air Marshall Carson (Peter Sarsgaard, with the deadest eyes you will see in cinema, until the next Romero zombie-romp), the grounded Sean Bean as the staid aircraft captain, skeptical stewardesses (Erika Christensen and Kate Beahan among them), along with the now-perfunctory airline trope of Mysterious Arabs, a bevy of disgruntled extras, and the aircraft itself in the role of Panic Room at 30,000 feet.

Systematically shooting down search options (with all the principals exuding gratifying “real-world” professionalism and demeanor), the world suddenly skews under Kyle’s feet when a devastating “fact” surfaces that reveals she might, in fact, be delusional about her daughter. Please note the location of the emergency exits as the –

CAPTAIN HAS TURNED ON THE SEAT BELT SIGNS: Please return to your seat number PG-13, and ponder on a sad truth about movies aimed at a wide demographic. FLIGHTPLAN’s scenario faces two options – Option One would be that Kyle is delusional (as we grimace in anticipation of a Patrick Duffy shower-scene copout); Option Two is that her child really is missing (bearing in mind that Hollywood hates imperiling children, at least, not without severe retribution against the perpetrators – which means that even if Julia is missing, she will be rescued, whilst cheating a Damoclean ticking clock). Once we are made aware of which option this movie chooses, it is simply a matter of following the generic breadcrumbs to their Hollywood cookie-cutter conclusion. When The Villain is revealed, the plot – instead of thickening – is diluted.

TURBULENCE: The Villain lapses into Bond-speak, explaining his Grand Plan. Oh, we didn’t need that at all.

UNDERCARRAIGE IS DOWN BUT WE’RE COMING IN HARD: Movie’s resolution is telegraphed via the Villain’s meticulous plotting and placement of explosives, and via his accomplice, who is fraying at the edges.

We’ve reached our destination, with stopovers in Hitchcock and Christie. Thank you for observing our FLIGHTPLAN. Please ensure your seats are fully forward and that your tray tables are in the upright and locked positions before disembarking the aircraft.

Thank you for flying Hollywood Airlines.