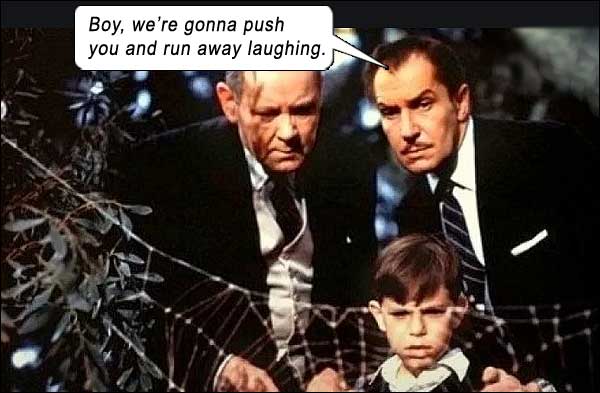 A scientist accidentally mixes his genes with a fly – and DOESN’T become a superhero!

THE FLY is classic science fiction poetry in motion: Tampering in God’s Domain and Paying the Price / Radiation Causing Monstrosity / Aloof Scientist Experiments on Himself / Forbidden Technology must be Wiped Out… An intriguing and terrifying thriller, from the days when experiments were conducted by flicking lots of switches on cardboard consoles, and reel tapes denoted that “computers” were somehow involved, like all the grand horror films of the 50’s and 60’s, THE FLY contains all these elements, and – Vincent Price!

David Hedison (best known for VOYAGE TO THE BOTTOM OF THE SEA, 1964) is scientist Andre, who invents what he calls a “disintegrator-integrator.” (Do we have to get a marketer up in here to rename it a “teleporter”? A commentary on “forbidden science”: Andre’s lab is in the basement.)

At first, Andre teleports his cat with the cute name – Dandelo – who doesn’t come back! He hears a “Meow!” from the aether… Disturbing, as Andre tries to fathom atomic dis-integration with a vernacular that is not yet invented. When he successfully teleports a saucer, the “Made In China” writing on its base ends up backwards. Another disturbing outcome, when we consider what might have happened had he put himself through.

Need we wait long? Sho’ nuff – he puts himself through. …along with a normal house fly inadvertently in the chamber with him…

All this we discover in flashback, as the movie opens with Andre’s wife Helene (Patricia Owens) confessing to his murder! She is traumatized as she relates these events to Inspector Charas (Herbert Marshall) and family friend Francois (Vincent Price, here to be a sympathetic ear, not a monster). All while sitting in her luxurious king-size bed with the frilly covers and not being arrested. (Later, when the inspector is questioning Francois on Helene’s family, Francois says, “they have too much money to know what to do with.” Ah, now we know why she can weep inconsolably in the comfort of her own home after confessing to murder.)

Interesting to note that the film has given away its ending during its beginning, yet it can afford to do this because the climactic jolt is not in the plot details, but in the shocking visual reveal of what Andre becomes.

Helene relates Andre’s progress on that machine with the long science name, which looks like it’s trying to make an Eat At Joe’s sign. She calls it “frightening, like playing God.” He maintains “God gives us intelligence to uncover the wonders of nature!” Yet we can see whose side the filmmakers are on – God’s. And He is a Jealous God…

Director Kurt Neumann and screenwriter James Clavell (from a story by George Langelaan) reflect the provincialism of the times by allowing scientists to have knowledge and intelligence, allowing them to have fridge-sized “computers” with flashing lights, yet not allowing them to do anything remarkable with all their futuristic gear and smarts. Anything remotely visionary is damned. The filmmakers themselves are the villagers in Dr. Frankenstein’s village with pitchforks and burning torches. (If Steve Jobs lived in the 1950s, they would have first hanged him as a witch, then they would have made a movie about the Apple-1 blowing up and killing everyone.)

Helene is a victim of Future Shock, before the term was coined by Alvin Toffler in 1970: “Andre, I’m scared: electronics, rockets, earth satellites, supersonic flight and now this–!” Waitaminute – she’s scared of electronics? Honey, you need to get out more.

One day, Andre locks himself in his lab, his only communication with Helene, notes he slips her under the door; notes with intriguing detailed instructions on bringing a saucer of sugary milk, etc.

Soon, Andre invites Helene into the lab, a black cloth draped over his head, his left arm shoved deep into his lab coat pocket. He cannot speak. He types a note that she must find a “fly with a white head” that might still be in the area. She enlists the aid of their young son and the maid (Kathleen Freeman, in between Jerry Lewis movies).

Helene discovers the truth soon enough. In a terrifying reveal, which I’m sure must have shocked 1950’s audiences viscerally – because it’s shocking even now! – Helene pulls the black cloth off Andre’s head. And it is the head of a fly! Giant eyes, hairy black skull, twitching mandibles!…

The bravery in this particular story is that the horrifyingly deformed scientist does NOT become a monster. He retains his human faculties, and explains that the other being’s genetic drives are trying to take over his brain; reverting to base instincts like eating and killing if threatened. His left hand is a fly appendage and it keeps attacking his right hand against his will as he is trying to write or eat. Slightly comical, because that action has been done to death comedically, but Hedison plays it tragically, and combined with that melodramatic score, the pathos is heartbreaking. We feel a kinship with this “monster” akin to KING KONG.

Andre can feel he is losing the battle against the fly mind, writing: “Kill fly – please help me but don’t come near me.” Again, we are not usually privy to the journey of the mind slipping away; usually the person steps over a clear line and becomes the monster outright. Usually killing for no reason and Carrying Woman For Poster.

A disturbing climax, as Helene crushes Andre’s head in the steel presser in the backyard (doesn’t everyone have a steel presser in the backyard?). More psychological horror, as his deformed arm falls out after he is dead, and Helene must approach her husband’s dead form – head squashed beyond recognition – to put his arm under the presser near his mashed head, and go press Start again. And watch it re-crush her once-husband.

As if that wasn’t disturbing enough, an epilogue ensures nightmares, as Francois and the detective discover the white-headed fly in the garden, trapped in a spider’s web… a tiny voice crying out, “Help me! Help me!” It has the face of Andre.

The detective shudders, “I shall never forget that scream as long as I live!” You and us both, cop!