The Foot Mouth In.

FOOT FIST WAY is the literal English translation of Tae Kwon Do. And the ancient Tibetan translation is Not Quite Comedy. 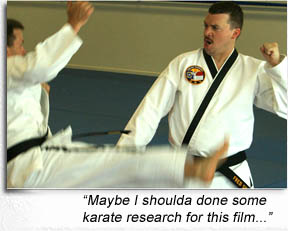 Produced by Will Ferrell and Adam McKay, Danny McBride‘s THE FOOT FIST WAY is an uneven bid at indie cult, as it explores themes of narcissism and self-esteem, filled with non-sequitur characters, bad actors, and jokes that Will Ferrell would find funny.

McBride is Fred Simmons, a mediocre yet egomaniacal karate instructor, who owns and runs his own dojo, giving parking lot demonstrations to solicit customers. In his words, he is “The King of Demo.”

Fred’s life falls apart when he discovers his wife, Suzie (Mary Jane Bostic, whose acting talent stems solely from her mungus bazoongas) has been having an affair with her boss. When he further discovers his idol, karate master Chuck “The Truck” Wallace (Ben Best) is a callous asshole, his worldview comes crashing down. It doesn’t help when Fred busts his wife taking a ride on The Truck…

Filmed entirely with a Steadicam, FOOT FIST WAY is a painfully-independent comedy; to his credit, McBride pulls off a good Ricky Gervais Lite, but the production is lacklustre, although I wouldn’t blame the filmmakers’ sincerity, rather, budget.

We can never discern whether Fred Simmons is actually a craftsman or not, as he has won awards – yet his demonstrations don’t exactly inspire awe the way watching even one second of Bruce Lee does.

This movie is also painful to tutors of all stripes. Allow me to explain, through my catharsis: Parents may send their kids to piano lessons, but the irony is, they don’t necessarily want their kid to END UP a piano teacher. They want much more for their little Bubba. They trust the teacher enough to have the teacher’s ideas implanted in Bubba’s head for life, and they respect the teacher enough to allow little Bubba behind closed doors with them – but seriously, “those who can’t do, teach,” right?

Fred Simmons character arcs in all the right places and finds he must give up his illusions and actually “do” to Truck Wallace; the servant must become the master, the teacher must become the pwner… and other spiritual guff for which Will Ferrell and Danny McBride are renowned.