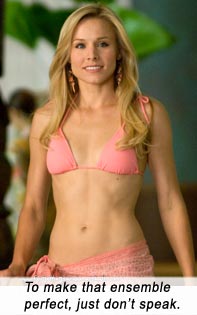 Forgettable romantic comedy about a jilted guy who takes a Hawaiian vacation alone to forget the girl who jilted him, only to find she is on the island, in the same hotel, ultimately in the room next door – with her new boyfriend. Beige, uncomfortable laughs ensue.

Redeeming factors of FORGETTING SARAH MARSHALL: Judd Apatow is producer, so the laughs are thankfully a little left of center; Jason Segel (also the writer) is the jilted guy, eternally mooning over his ex, working on a Dracula musical, and not afraid to drop trou on his pasty white lumpish body; Paul Rudd is a painfully hip surfer dude; Bill Hader is Segel’s happily-married stepbrother; cheeky pansexual Russell Brand steals every scene, playing Sarah’s new boyfriend, rock star Aldous Snow, like a walking erection; and Jonah Hill is a waiter infatuated with Snow. (Unknown to all at the time, including the filmmakers, this movie would serve as an informal prequel to GET HIM TO THE GREEK, which would re-visit the two characters personified by Brand and Hill here).

Smug Mila Kunis is the hotel concierge who brings out the adventurous side of Segel (predictably) and falls for his big depressing, pasty white lumpish body (inexplicably); cross-eyed Kristen Bell is Sarah Marshall, whose redeeming factor is her rock-hard spinner bod (but why did it have to be connected to something that speaks and has opinions?).

Segel eventually gets to stage his Dracula puppet musical. And it’s a smash. In this type of predictable romance-wad, of course it is. And of course, the moviemakers (Segel and director Nicholas Stoller) are banking on the audience’s ignorance of stage production to portray a show that involves so many props and actors it would be impossible to fund in any reality except romance-wad movies.