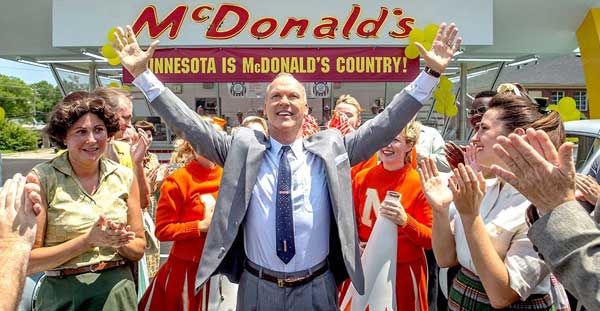 From superhero to supervillain.

THE FOUNDER, the story of how Ray Kroc stole the McDonald’s brand out from under its actual founders and turned it into the biggest fast food chain on the globe, is simultaneously inspiring and horrifying – like a meal from McDonald’s.

Written by Robert Siegel (based on the amazing true story) and directed like a lean burger by John Lee Hancock (SAVING MR. BANKS), THE FOUNDER at first seems like a triumphant underdog story, as disconsolate milkshake-machine salesman Ray Kroc (Michael Keaton) convinces Dick and Mac McDonald (gruff Nick Offerman and trusting John Carroll Lynch) that he can franchise their remarkably efficient and successful burger joint in San Bernadino, California called “McDonald’s.” Skeptical at first (for having tried and failed) the McDonald brothers give Kroc a shot.

He succeeds beyond their wildest expectations. Walk five blocks in any direction for proof.

And the underdog tale takes a turn down Obsession Alley and Power-Mad Boulevard as Kroc expands the McDonald’s empire like a military coup against the founders of the company themselves – the McDonald brothers – eventually even registering the brothers’ name as his business, “The McDonald’s Corporation.”

For all those people who, like myself, always thought there was something screwy in why the restaurant name did not match its founder’s name, now we know why: Kroc is not the founder! The movie title is ironic! After gradually claiming all the brothers’ ideas as his own, Kroc would eventually even claim he was the founder! In a sad final confrontation scene between Dick (Offerman) and Kroc in a men’s room, we would discover Kroc’s motivation for overrunning the McDonald brothers: “That glorious name: McDonald’s. It could be anything you want it to be. It sounds like… America! That’s compared to Kroc’s. Would you eat at a place called Kroc’s?”

McDonald’s had lines around the block even when the food was edible!

It was 1954 when Ray Kroc first appeared at the original San Bernadino McDonald’s to deliver 8 milkshake machines. (This original restaurant would even lose its primacy as “Location #1” after Kroc registered one of his franchises – at Des Plaines Illinois – as McDonald’s #1!) Kroc was stunned by the high quality food and the speedy service. “This might be the best hamburger I’ve ever had in my life!” (Now keep in mind, it’s 1954; he’s obviously not talking about the modern two processed all-beef patties processed special sauce processed lettuce processed cheese processed pickles processed onions on a processed sesame seed processed bun.) This was back when the McDonald brothers cared about quality and flavor and service.

When Ray is being given the store tour by Mac McDonald (Lynch), we are on Mac’s side, for being such a sweet man and entrepreneur. And we are also on Ray’s side, as a guy down on his luck who might turn things around with the marketing potential he sees in McDonald’s.

The three principals (Keaton, Offerman and Lynch) bring their A-game: Keaton bringing that charm offensive we know so well, which keeps us off-balance when his character turns to the dark side; Offerman, such a fine comedian, here unamusing and unamused as the strict businessman who sees early that the brothers are being led down a wrong way street; Lynch, the more gullible brother, conflicting emotions warring across his face, allowing Kroc a long rope and making excuses for him, until he too finds himself shouting uncontrollably over the phone to Kroc in a losing argument…

The underdog aspect lingers when we meet Kroc’s neglected wife Ethel (Laura Dern), who has endured too many of Kroc’s Get-Rich-Quick schemes to get excited over the hamburger franchise. Ethel is pleasantly surprised when Kroc announces they would have dinner at the club – where she was pining to go, to resume their social life – only to discover Kroc using the visit to recruit franchise owners from their high roller friends. Even so, there is a touching moment when Ethel professes belief in husband Ray against his high-roller detractors and skeptics. Dern’s role is a little hard to tease into, as it seems she “resigns” herself to Ray’s schemes, rather than wholeheartedly supports him. But we can’t quite tell; there is not enough screenplay burger for her to become more solid.

Ray’s stores pop up so fast, the quality control suffers, and Ray discovers that the men with money are not the right men to run the golden arches. He stumbles across another hard-luck, hard-working salesman like himself; he notices a hard-working employee at his Store #1; with every ambitious underdog that Ray recruits, he soon discovers that those with family values and a solid work ethic make the best managers. And there is a record-scratch of irony that rends the fabric of spacetime itself: Ray, a ruthless, unscrupulous shark hiring only honest, honorable men. Ironic that Ray, who would meet a franchise owner’s wife and take her for his own, would promote “family values” to his customers; that this cynical cutthroat banked on the whole world being attracted to innocence for his restaurant chain to flourish.

Linda Cardellini is that other woman, playing Joan Smith with over-blond hair and over-red lips, wife to Rollie Smith (Patrick Wilson). She introduces the idea of powdered milkshake mix – to save on crippling freezer costs. Back in that faroff era, both Dick and Mac McDonald refused the packaged mix – until Ray just shipped boxes of it to all “his” franchises, who adopted it, eventually sending a case to the brothers.

Dick: “There’s a wolf in the henhouse.” But it was worse than that.

Lawyer Harry J. Sonneborn (B.J. Novak) allies with Kroc. And it’s all over but the special sauce: “You’re not in the burger business – you’re in the real estate business.” In an ingenious move, Sonneborn convinces Ray to buy land – the land that the franchised buildings must rest on. And Ray buys the land of the brothers’ number one store as well. Which effectively meant they started paying him rent as their landlord.

By the time Ray Kroc has decimated the McDonald brothers’ holdings, interests and influence in their own company, we realize the ambitious entrepreneur we are conditioned to root for in movies has turned into a covetous nightmare fiend. Keaton is electric in the role, and we recall how Satan doesn’t come like a villain, but charms us into evil. 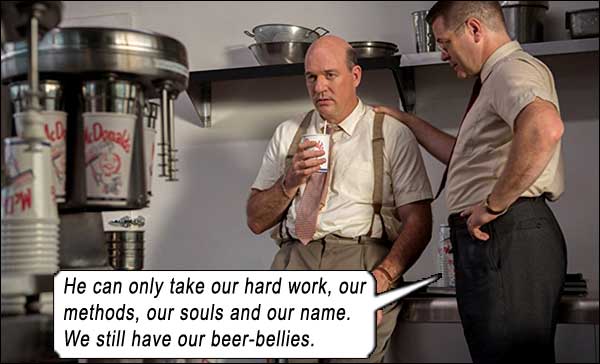 As morbid as Kroc’s takeover was, it’s a lesson in how to efficiently get out of a contract with no negotiating: become richer than the person you work for; Too Big To Nail. Prosaic but profound, in a world where might is right and money is power.

Dick McDonald constantly reminded Kroc of his contractual obligations to the brothers. In the end, Kroc would buy McDonald’s out for $2.7 million, and a handshake deal for 1% of all profits to the McDonald brothers in perpetuity – which he never paid…

We do see Coca-Cola become a corporate sponsor (against the wishes of the McDonald brothers), but movie ends before we see the advent of toy tie-ins, fries that taste like shoelaces and never go stale, charities allying with the company, the drive-thru, the “billions served” marquees, or the iconic “M” being instigated into the name, even though there were always “golden arches” adorning the restaurants. We are also a long way from seeing the death-smiling clown “second only to Santa Claus in terms of recognition,” Ronald McDonald (created 1963 by Willard Scott), or his minions, including the character that might have been a template for Ray Kroc – the Hamburglar.

What started as a poor man trying to make ends meet, became an unethical corporate juggernaut that nothing could keep down – like a meal at McDonald’s.