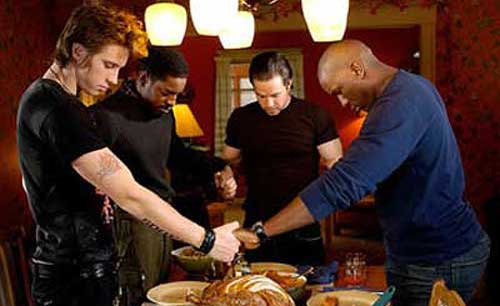 “Oh Lord, we thank you for these biceps and awesome trapezius…”

Four adopted brothers – two white, two black – reunite in the hood to hunt down their mother’s killer. And make a racial bonding statement.

FOUR BROTHERS stars Mark Wahlberg as Bobby Mercer, one of four “brothers” (unrelated street kids adopted by kindly Fionnula Flanagan when she couldn’t find homes for them), all returning to their Detroit haunt after the fatal shooting of their beloved step-mother.

Bobby and his street-hard brahs (Tyrese Gibson, Andre Benjamin and Garrett Hedlund) knock on a few doors and bust a few heads and discover that their mother’s death was not just an accidental grocery store wrong-place-wrong-time murder, but a hit, involving cops and robbers.

It’s an energetic, involving thugalicious actioner, a well-constructed story that snakes across many red herrings and intriguing plot points: a lawyer having an affair with Mother, an insurance policy payoff, a large debt to the mob, crooked cops, shootouts with rival gangs, and a kingpin one step away from Lucifer.

That kingpin is Victor Sweet (the magnificent Chiwetel Ejiofor), who establishes his villain bona fides in his first electrifying scene, as he throws a gang member’s meal to the floor and makes him eat it like a dog on hands and knees; when that gang member’s wife gets lippy, Sweet forces her to join her man on the floor. In a firestorm performance, Ejiofor’s Sweet deals out humiliation like people deal out cards: when a judge (Barry Shabaka Henley) gives him bad news, that judge is relegated to sitting at the kiddie table; when a gang member realizes he has a better poker hand than Sweet – he folds, terrified, rather than drop the hand on the vicious hand that feeds him.

Sophia Vergara as Gibson’s girlfriend, in another annoying role where she can’t keep her mouth shut or her legs closed (hence necessitating her namesake – Viagra); Taraji P. Henson as Benjamin’s loving wife; Terrence Howard and Josh Charles as two cops also on the track of Mother’s killer – for differing reasons; Adam Beach in a cool cameo.

Directed by John Singleton (BOYZ N THE HOOD, 1991), movie surprises with its poignancy; there is a palpable camaraderie between the brothers (and that racial statement is made louder and clearer than at any political rally, just by their comfortable interaction). The scenes at the dinner table where each brother imagines Mother speaking to him, chiding, instructing, telling him to sit up straight, move us to remember that each of us cucumber thugs – no matter how hard we think we are – are mama’s baby boys at heart…

I still don’t get the last scene though, where Mark Wahlberg comes striding across the ice – just at the moment Sweet challenges anyone to take him on. That means, to make this moment happen: he didn’t ride up with his brother, but decided to get out of the car miles ahead – in the snow – just so he could appear at the correct dramatic moment walking up to the dueling location for the Hero Shot.

You lost me at hypothermia racial statement.