Someone’s been reading Whitley Strieber’s Communion. And believing it.

There are two kinds of hoaxes. The First Kind catches the public off guard with its ersatz authenticity (Piltdown Man, Orson Welles’s broadcast of War Of The Worlds, THE BLAIR WITCH PROJECT); the Second Kind requires but a minimal amount of rational thought to dispel its idiotic fakery. Olatunde Osunsanmi‘s film THE FOURTH KIND – is the Second Kind. 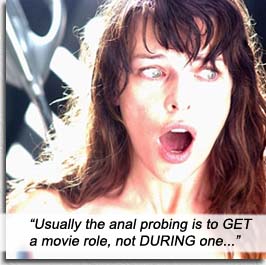 Full marks to Osunsanmi for getting it done, though: it’s hard work in Hollywood moving any project from conception to completion and he not only scored funding for his outdated, tired concept of extraterrestrial alien abduction, but also A-List stars to pretend to be abducted. He goes to great pains to stamp it with authenticity: names bleeped out, faces blurred, filmstock doctored to look like vidcam footage, bad angles – and then makes one fatal mistake…

THE FOURTH KIND starts annoying us from its first frames, as Milla Jovovich walks toward the camera way too seriously for anyone with her do-me eyelashes and starts talking directly to the audience, telling us she will be portraying Dr. Abigail Tyler, while a title card appears, alerting us: “Milla Jovovich (actor).” To add to the irritation, it looks like an MTV VJ monologue.

Firstly, Jovo, you’re way too pretty to be Abigail Tyler (whom we see in “real footage” looking like a bloodless zombie), which raises another problem, in two parts:

Close Encounters of The Kind Cuke

When Will Patton appears in a sheriff’s car, we take it for granted he’s the sheriff in this movie – until Osunsanmi blows our contact-high with the title card: “Will Patton as Sheriff August.” In any film – even bad ones – our suspension of disbelief at least concedes that the actors ARE the people they’re playing, but if we keep getting told they’re actors, how do we invest our emotions in them? When Abigail (Milla Jovovich, actor) is hysterical over her daughter being kidnapped, after maintaining throughout the movie that she is just acting, now you want us to be concerned that she’s ‘acting’ hysterical? You can’t have it both ways, Osunsanmi!

One glance at the credits will reveal “The Real Dr. Abbey Tyler” is played by bedraggled Charlotte Milchard. (Yes, an actor too!) She appears in leached footage telling an interviewer (director Olatunde Osunsanmi – playing an interviewer named Olatunde Osunsanmi!) about her hypnosis experiments on residents of Nome, Alaska, and how those rednecks having seizures on her couch “proved” they were abducted by space aliens. She’s got the video to prove it. No, not video of them being abducted – video of them having seizures.

The concept is ripped directly from Whitley Strieber’s 1987 book Communion – an autobiographical account of the author “remembering” being abducted by extra-terrestrials when he was put under hypnosis. When I was a kid, that book terrified me for its portrayal of otherworldly things that I, as a young person, could never hope to understand or experience; now, it’s not the book that terrifies me – it’s the adults who believe it’s true.

Split-screen during hypnosis sessions, showing ‘actors’ on one side and ‘real’ footage on the other, with ‘actual audio’ of Abigail Tyler. Which raises the most obvious issue: If they’ve got the REAL FOOTAGE, why bother with reenactments? What could be more disturbing, more authentic than the real thing?

Of course, even the ‘real’ footage is created by Osunsanmi, with its audio dialogue matching the actors’ dialogue in the ‘reenactment’ footage word for word – a perfect feedback loop of prosthetic-limb-sniffing stupidity.

If Osunsanmi wanted to scare youngsters and ET abduction knuckleheads, why couldn’t he simply tell us he’s showing as much actual footage that exists and then providing dramatizations also?

Abigail’s husband was killed mysteriously; apparently stabbed on their lover’s bed by an alien, no clues left behind. We later find out that he committed suicide, which is plausible for two reasons:

1) it explains why she was never arrested as a prime suspect in his murder;
2) he was married to HER.

Will Patton as Sheriff August even shows Abigail (Mila Jovovich, actor) photo evidence of the suicide and she refuses to believe it. Interviewer (Olatunde Osunsanmi, actor) asks The Real Dr. Abigail Tyler (Charlotte Milchard, actor, playing The Real Dr. Abigail Tyler), “How do you expect me or the audience to respect your credibility over anything else you’ve said?” She answers, “They weren’t hallucinations. It’s hard to face the truth.” How very Christian of her: even in the face of evidence, believe the fantasy. It’s almost like she’s an actor in a movie pretending that something is real when it’s not.

When one of Abigail’s patients (who suffers an inordinately violent seizure on her couch – and therefore must have been abducted real good) goes home and shoots his family (in more ‘real’ footage split-screened with asinine dramatizations), only Will Patton as Sheriff August dares to ask the pertinent question, “Without hypnosis, would he have killed his family?” Because if you truly believed the bullshit art of hypnosis is real, then it follows that human behavior could be adversely affected by it, which means you are admitting to being at least partly responsible for murder. But the fact that Abigail continues to remain free of custody means that no one is taking her little vocation or her claims seriously.

This raises ANOTHER question: if the city of Nome has established that Abigail’s husband suicided, it means they consider her extraterrestrial claims bogus, which means they are allowing a known delusional hypnotherapist to continue practicing in their town, and are derelict in their duties to protect the populace. Who is regulating these “doctors” – actors?!

Actor Elias Koteas plays Abel Campos, Abbey’s confidante and resident skeptic. Every ET abduction tale has a resident skeptic (like a gay beard or something) to allow ET lunkheads to pretend they really are considering the scientific side of abduction theories. But these skeptics are about as dedicated as gay chicks in Hollywood movies that go hetero at the drop of a trou.

Abigail plays us recordings of aliens speaking through her under hypnosis, in a dead Sumerian tongue. They say things like, “I am god,” “I am father,” “I am savior,” trying to hitch their wagon to Erich von Däniken’s Ancient Astronaut theories. So I guess if you speak with a basso intonation in a foreign language – you must have direct contact with extra-terrestrials! Now we’re at a level of stupidity that would make von Däniken proud.

Redneck voiceover testimonials close the movie: “I saw somethin’ flyin’ with 20 red lights on it.” Well, that IS the technical definition of an Unidentified Flying Object. And guess what? YOU don’t have the authority to identify it. It’s being done on a military level far above your pay grade and small mind. Sighting that UFO didn’t prove how vast the universe is with its extraterrestrial technologies, it proves how insignificant YOU are when it comes to terrestrial technology.

Encounters in Kind:
Close Encounters of the First Kind: Sighting; which happens every day on air force bases and airports around the world; doesn’t mean we’re being visited. It means people are being neglectful or secretive.

Close Encounters of the Third Kind: Contact. Let’s not even mention Spielberg’s stellar movie in conjunction with this snot.

Close Encounters of the Fourth Kind: Abduction. Well, that’s what the knuckleheads tell us, but it’s no different than The Third Kind. Mighty musical aliens – where are you when we need you to REALLY abduct some waterheads?