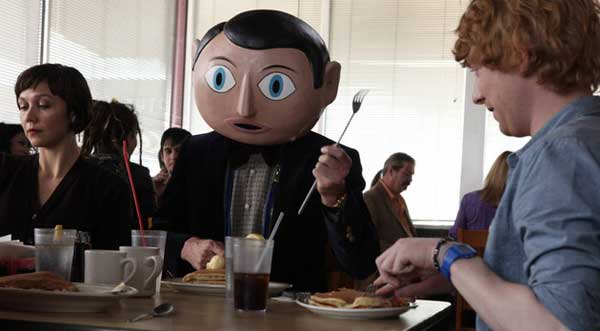 “How’s this for quirky? I’m drinking my Coke through a fork!”

FRANK, a quirky dramedy centering on an avant-garde rock band and its offbeat leader in particular, is – unlike many movies of its musical ilk – not about seeking success through stardom, but fulfillment through creation.

We meet keyboardist Jon (Domhnall Gleeson), trying in vain to string words together to make some kind of statement, at the least, to complete an original song. Through a chance encounter, he is asked to join a band called SORONPRFBS, led by a guy wearing a large papier-mâché cartoonish head, named Frank (Michael Fassbender, in a performance that can be held up alongside any of his great roles, even though we never see his face!). Why does Frank wear the head? Well, why do KISS wear makeup? Why do Red Hot Chili Peppers wear socks on their willies?

Jon discovers the band is as eccentric as Frank. Belligerent theremin and Moog player Clara (Maggie Gyllenhaal) believes she is Frank’s girlfriend and is constantly mad at Jon, seemingly for intruding into the band; Baraque (Francois Civil) is the moody bassist/guitarist who only speaks French; the Goth drummer Nana is Carla Azar, real-life indie drummer, including stints with Jack White. Scoot McNairy is the band manager, in a love/hate relationship with Frank’s head. 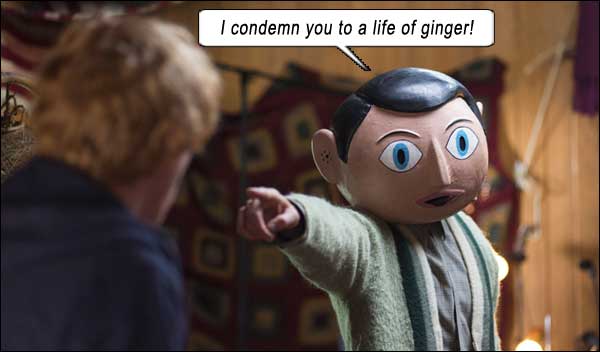 Recruited because their last keyboardist tried to drown himself in public, Jon should have run screaming from this band of dysfunctional misfits, but he is so desperate to dip his toes into any gig that might lead him Anywhere But Here that he weathers their bonkers experimentation, ferocious insults, veiled accolades, and forays into aural dementia.

Jon brings with him an urgent desire to succeed commercially (as any musician would), and discovers too late that that is at cross-purposes to the band’s very existence.  Soronprfbs takes him into a recording studio in the countryside and Jon ends up funneling his own nest egg into the album (which Frank is never satisfied with). Jon starts a social media campaign that raises the band’s profile (which Frank doesn’t understand); he books a gig at the South by Southwest festival, which the band boycotts except for Frank, who collapses onstage before they start, because “The music is shit!”.

At first, we take it for granted Frank is a tortured genius, and only when we discover why he wears the head, do we realize that maybe the film is sending a completely different message than the artistic one we first imagined. A much more prosaic message.

Even when Jon suggests commercial music and Frank agrees (“I’ve dreamed that one day I’d have a band member that shared my vision of creating extremely likeable music!”), his attempt at mainstream, My Most Likeable Song Ever, is a bouncy madman’s jingle. (It’s pretty catchy though.) Earlier, when Jon offered up one of his original songs, Frank and Clara, by degrees, turn it into an artsy-fartsy klown-fest. 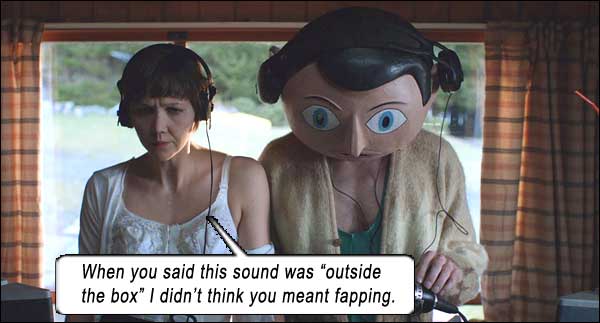 That’s Fassbender singing, a pretty decent, indie-styled voice. It seems like every member (at least Fassbender, Civil and Azar) is actually performing their parts, and there is a raunchy rawness to their efforts (although sometimes we hear extra instrumentation, like backing guitars and overdubs). The final song, I Love You All, is a poignant wail of redemption – for Frank (who has faced his fears), for the band (who are reunited in the most inauspicious of hellholes) and for Jon, who realizes his intrusion did cause the band’s dissolution, and that their goal was never to “make it” or even to be liked, but just to “be.”

Inspired apparently by a real-life character, Jon Ronson writes and Lenny Abrahamson directs. What a great hook! This guy never takes off his head – not to eat, sleep, smoke or shower. However, like every great ghost story that is startling and compelling in its first two acts, and then falls down because the reason for the ghost’s existence must necessarily be mansplained, FRANK, for all its advocating of thinking outside the box, concludes with a simple tragic truth, rather than an enigmatic question mark. Quite explicitly, the movie tells us that everything we felt for Frank was misplaced, and you will re-watch the movie with different eyes. Even leaving us with such a powerful outro song does not negate the fact that the band must now re-think their loyalties, because along with Frank’s face, his condition is revealed, and it is decidedly not why they cleaved to him or his supposed artistry.

Ultimately, when the head is gone, it takes all the artsy with it, leaving us with just the fartsy.