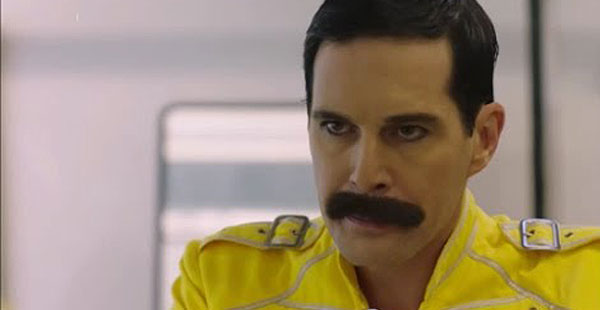 I don’t have any aspirations to live to 70. I’ve lived a full life and if I’m dead tomorrow, I don’t give a damn! I really have, y’know, done it all.
— Freddie Mercury.

According to this TV documentary, Freddie was a man-slut who happened to play Wembley Stadium by accident one day. Then he died of AIDS. Hmm, think I’ll stick to my lifelong musician’s knowledge of Queen as a world-conquering, pioneering, virtuoso band, with Freddie as one of its four immortal engines.

Through a series of execrable re-enactments, and interviews with people who barely knew him (photographers, drivers, acquaintances), WHO WANTS TO LIVE FOREVER tries to piece together how Freddie spent his last few years, revolving solely around his disease, like some kind of morbid TMZ episode on AZT. There is very little mention of his music, and then, only in relation to his ailment. Now this approach is fine, as long as you don’t sell your feature as “The Freddie Mercury Story,” which should include so much more than just AIDS and gay parties. Try something along the lines of “Freddie Mercury’s Battle with AIDS” – then go nuts with your blinkered sensationalism.

Noticeably absent from the talking heads are Freddie’s closest hearts: his parents, Mary Austin, Jim Hutton and members of Queen. Neither are there interviews with Paul Prenter, Jim Beach, Roy Thomas Baker – all heavy hitters behind the Queen phenomenon. What then, is left of this doc’s credibility? The filmmakers (Channel 5 Productions UK, and writer-director John Fothergill) may have some modicum of respect for Freddie’s art and legacy, but their final product reflects exactly the opposite. 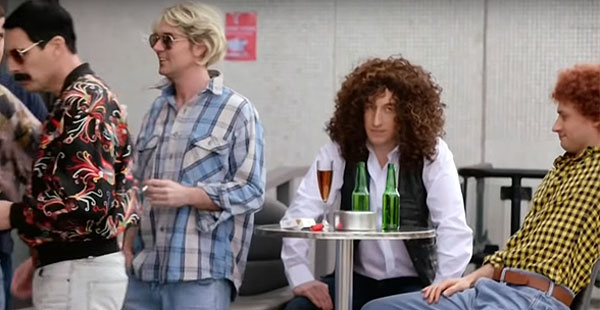 The doc starts on Saturday, July 13, 1985 – Live Aid at Wembley Stadium. Backstage. The first thing we see: Australian Freddie impersonator John Blunt is “day-oh”-ing into a mirror. His fake porn-stache and slight muffin-top are a little distracting, but we have to give any lookalike some leeway to grow into the character onscreen. Narrator Richard Allison (who has that indefinable quality in his voice that makes any success seem like failure) tells us Freddie, with recurring throat problems, is singing against his doctor’s advice this day. Suddenly – all is lost –

The second thing we see: the guy playing Brian May looks like Eric Idle in a golliwog wig, while John Deacon looks like a ginger golliwog, and Roger Taylor looks like some bimbo trying to look like the drummer from Queen. From our perception, it throws the whole production into disarray for a few seconds: Is this meant to be a spoof like THE RUTLES? We know the focus is on Freddie, filmmakers, but if you’re going to insist on these detestable re-enactments, have the decency not to distract us with wigs that prove you have the discernment of a hedgehog.

We are soon onstage at Wembley, where the doc cuts to real footage of Queen coming onstage. It’s jarring, but a welcome relief from the catastrophe of F-list actors wearing rugs backstage acting the shit out of “being excited.”

The real footage of Queen is the only saving grace of this movie. Any time we see magazine pictures, video, live onstage (such as Knebworth, the Magic Tour) – those are the real champions; any time we see backstage, or speculative meetings, or just dull talk between band members, it’s the guys in the $2 wigs. Narration tells us Wembley was a rebirth for Queen. No, it was just another kick in the pants for the band’s career. (I hate this rewriting of Queen history regarding Live Aid. It’s starting to feel as if no other bands performed that day.) Also, movie treats the Live Aid gig as if it was an authorized tour performance, rather than Queen’s almost begrudging contribution to the charity event instigated by Bob Geldof and Midge Ure.

Next thing we know, Queen are ecstatically breaking out the champagne backstage, as if it was a tour date, and they just killed. Forgetting the reason for the gig being the Ethiopian famine, forgetting all the other bands on the bill doing just as great a job as they did, forgetting that Brian’s wig is now totally sideways.

Throughout this film, there isn’t even a cursory perusal of the Queen music catalogue; there is no inside info on how Freddie and the band constructed their heart-racing musical epics or their towering vocal ziggurats; there is no Queen, Queen II, Sheer Heart Attack, A Day At The Races… nor is there post-AIDS output like Innuendo, The Miracle (but they do tell of Freddie’s solo operatic crossover album, Barcelona).

Gay parties, gay nightclubs, gay leatherboys – all thrown in our faces as if this is all that Freddie was (oh, and he accidentally played that gig at Wembley). And these sequences are presented with such an air of disdain, no wonder people are turned off by the tone of this biopic.

Other than the surprising interviews with Freddie himself, and the always-delectable live footage of the band, it is up to John Blunt to barely hold this piece together with his reasonable representation of Freddie’s movements and speech patterns.

A Flick of the Wrist – and a Snatch of the Wig.

Freddie never went public at the time that he was diagnosed with HIV, letting the British press run rampant with rumors. He never wanted to be the poster boy for the disease, and wanted to continue as a musician – which he did, most remarkably, his final three albums (The Miracle, Innuendo, and the posthumous Made In Heaven) all created while he knew his days were numbered (although we don’t really see the drama of recording these albums in this doc, no surprise).

We are taken deep into Freddie’s sad final days, portrayed tastefully, where we learn a little about Freddie’s pain and suffering, not all to do with his disease, but his social perception. I guess it’s good for posterity that media has been created detailing those terrible times (it’s just that they should not have upsold this doc as Freddie’s “story” because that involves so much more!). And though the British press painted a lurid picture of his private life as his condition deteriorated before their eyes, at least they were unafraid to term Freddie “bisexual” rather than homosexual or exclusively gay.

Movie ends with Freddie’s quote (above). Freddie died of bronchopneumonia related to AIDS, on 24 November 1991, hardly a day after he finally issued a statement confirming he had AIDS.

Musicians, statesmen, the world press, and wigmakers mourned the passing of a legend.