When one is in love one begins by deceiving oneself, one ends by deceiving others. That is what the world calls romance.
— Oscar Wilde, “The Picture of Dorian Gray.” 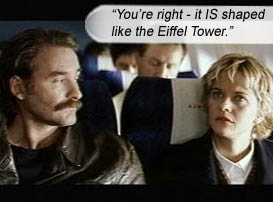 Kline as Luc is the only watchable thing in FRENCH KISS – besides the glorious Parisian backdrop. The great Jean Reno (LEON, 1992) plays a one-dimensional French cop who allows Luc to evade him because Luc saved his life once; Hutton is a McGuffin and his high-thighed temptress merely a plot element. And Ryan is so ingenuously irritating and cloying and provincial and desperate and ugly it is no wonder she had that facelift that destroyed her face and career.

Timothy Hutton does exactly the same thing Warren Beatty does in LOVE AFFAIR 1994 – finds “true love” on a trip abroad and leaves his current partner to pursue it. Yet this movie makes him the Bad Guy! Even though, like Beatty, he professes his new love is The Real Thing. But “true love” here is from the dumped partner’s point of view: “…because my love is there with his slut girlfriend…”

And true love to Kate is what she has been indoctrinated to believe in her immature Disney-Brady Bunch culture. She actually says: “I’m gonna get him back, and I’m gonna make him love me and we are gonna live happily ever after!” Uh, how do you plan on “making” him love you? Bring him breakfast in bed? Spend ten extra minutes on your mediocre hummers? What? Free will, emotions, hormones, pheromones, rationale, reality be damned.

Kate meets Luc on the plane. He uses her to smuggle a small grapevine into France without her knowledge. He fawns over this illegal vine sapling, which he aims to start a vineyard with and Go Legit (of course, his idea of Legit is to illegitimately rip off anyone who could contribute towards his Legit Dream). This redemptive gimmick only exists to cushion the blow of perceiving him as a one-dimensional thief – the “tender” side of Luc that we are meant to harken back to as Luc perpetrates one criminal act after another for the sake of “love” and his “dream.”

While in France, Kate gets her bag stolen, so Luc (at this point, her pseudo-beau) steals a car to recover her bag. But he steals it for a SENSITIVE reason, cos he’s worried about that poor sapling is all…

In trying to re-steal his necklace from another con-man, Luc steals a bike. How many people laughed at the owner of the bike running after Luc in fury? Answer: Everyone. Because oh, that sapling, illustrating his nurturing and caring side…

But all that stealing and low crime is simply to kill time while Luc and Kate fall for each other in Paris while saying they hate each other. If you’ve seen any Hollywood Romance, you know the formulaic guff by now.

Luc calls attention to the woman’s “weapon” – the Pout – where she implies Yes when she means No and says No when she means Yes, leaving her suitor in a state of lustful disarray. How does this appraisal sit with all those High Court Judges and sleek-thighed, mini-skirted temptresses insisting that NoMeansNo? The same audience that laughed at Luc’s wrongful deeds must now search their principles and wonder on whether they agree with him on how women Ask For It. More than likely, I’d say they only accept the parts of him that they like and sweep the rest under the carpet, like the King James bible.

Kate is oblivious to the Eiffel Tower, continually missing glimpses of it, until her latent sexual feelings (euphemized in the film as “love”) rise to the surface. Only when she realizes she is “falling in love” does she notice that BIG PENIS.

What can we learn from FRENCH KISS? Bleary-eyed women will lament, “This is how a man should woo me!” (Be a criminal?) Men should view this pathetic farce as education, gleaning the angles women will fall for in The Cultivation. The most valuable lesson any man can learn from any Romantic Comedy is: Disguising the fact that the One Thing is prevalent in your mind, is the quickest way to get the One Thing.

Movie ends with Luc and Kate strolling through that vaunted vineyard he committed all those crimes to attain. Legitimately, of course.