And we thought BACK TO THE FUTURE covered all the angles of going back in time to change the present!

Jim Caviezel is Jesus and Dennis Quaid his Heavenly Father, who speaks to him through a magical ham radio. 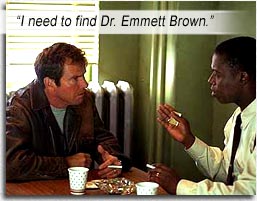 Actually, Caviezel is a New York cop, his father a fireman who lost his life years ago. A ham radio that used to be their common plaything becomes a communication bridge between the past and present, due to a freak aurora borealis flareup and screenwriting audacity.

Through future knowledge, the son averts the father’s unnecessary death, but finds that it triggers other events leading to the death of his mother! An intriguing tale, with many interesting twists, as Caviezel does the Marty McFly and keeps trying to rectify the past (by aiding his father with future knowledge) to make a present they both like. Kinda selfish, no? But director Gregory Hoblit moves the tale at a brisk pace that doesn’t allow us to fuss over Caviezel’s and Quaid’s New York accents constantly wavering. Even the last plot development is interesting, and resolves the story well, though way too syrupy for its own good.

In the 50s, it was Big Bad Radiation that caused all the evils and anomalies of the world; by the 90s, the universal nudge had become Misunderstood Genetics, but I think this is the first time the beautiful magnetic phenomenon Aurora Borealis has been used as the catalyst for Jesus hearing voices from beyond.