This might not be the original Stupid Knife-Kill Flick (HALLOWEEN holds that crown) – but it’s definitely one of the stupidest. Director Sean S. Cunningham has a lot to answer for… 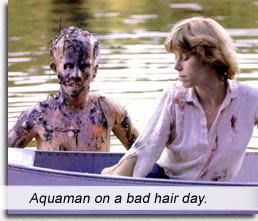 Six teen camp counselors at Camp Crystal Lake, busy re-opening it after a tragedy years ago, are killed one by one on Friday the 13th.

Movie opens on Friday 13, 1958, as two camp counselors (and I do mean ‘camp’) get knife-stuck while a boy drowns. Apparently, they should have been watching him instead of playing patticake. Then again, he shouldn’t have been out swimming at night like an idiot. Which informs us on what kind of maniacs he and his mother are for condoning that unsafe behavior in the first place. Flash forward…

TITLE CARD: Present Day. Gee, I hope not. Those hairstyles alone would never get me laid. We’re at the tail end of the rock ‘n roll lifestyle of the 70s: bellbottoms, frizzed ‘do’s and chicks with that “70s wench” idiom of flat bellies and flatter chests. Back when CPR was called mouth-to-mouth, back when a snake in your room meant Kill First, return it to nature later, if it’s not too dead; back when padding a movie with people making coffee and cleaning their teeth was called tension; when a girl getting down to her bra and panties meant she was going to die in a few minutes screaming irritatingly.

Under the hippie eye of Steve Christy (Peter Brouwer), the counselors arrive and remake the camp against the warnings of a crazy old coot named Ralph, claiming the place is cursed, who says he’s a messenger from God, “If you stay, you’re doomed!” (Then again, if it’s just someone slashing people, it’s not really a “curse,” it’s a lunatic with a knife. So much for trying to attach biblical portent to your film, Cunningham.)

Suddenly, lo – The Bacon! Young Kevin Bacon as Jack (you will only see him younger in ANIMAL HOUSE). And though you will never see any of the other untalented cast ever again (all disappearing from cinema as if knife-killed), at least they can say they’re ONE DEGREE from Kevin Bacon!

The innumerable sequels this movie spawned make the world erroneously believe FRIDAY THE 13TH is a movie worth having sequels for. But it was a cult movie then and it’s a cult movie still. It has its laudatory moments: the distinction of popularizing the point-of-view killer skulking in the darkness; the final scenes of serenity shattered by one of the world’s greatest jump scares; and Harry Manfredini’s music is still eerie stuff (just what the hell is making that “cheh cheh cheh… chih chih chih” sound?). But even the filmmakers admitted to tossing off FRIDAY THE 13TH as a quick buckmaker. Mainly for those uncreative dorks who derive pleasure from watching ferocious unmotivated homicides; for that niche of rednecks who enjoy cousin-dipping and hatchet-killing, drinking their own pee in marmalade jars.

Guess there are more rednecks out there than anyone imagined.

Thankfully, the most annoying bad actor (Mark Nelson) is the first to die. Sadly, The Bacon goes soon after. The last person left alive, who escapes the maniac’s knife, is Alice (Adrienne King), who, ironically, can’t act to save her life.

Up to that point, we only see the killer as a Point-Of-View shot. Now, wide-eyed Mrs. Voorhees (Betsy Palmer) makes up for her offscreen time by chewing the hell out of her onscreen time until her overacting causes Alice to escape, as she insists on going Bond-Villain and filling in the backstory of how her precious son Jason drowned in Crystal Lake, which started her vendetta against all camp counselors. Sounds logical.

In an upside down version of PSYCHO, the dead boy talks through his mother, Mrs. Voorhees speaking to herself, “Kill her, mommy!”

So after displaying her deadly efficient, silent killing skills throughout the movie, suddenly Voorhees can’t shutup and simply stab this last irritating screaming blonde. Maybe cos Alice was still fully dressed – see, that’s why you have to get the blondes down to their bra and panties.

This movie might have retained at least a mediocre rating, but it lost me during the strip-Monopoly game, where a girl gets down to her bra and panties (what a shock!) and then decides to call it a night. Instead of putting her clothes back on to walk out in the rain, she puts a raincoat over her bra and panties and steps out into the tempest! I’m sure I saw a KILL ME sign on the back of the raincoat…

The hockey-masked, machete-carrying Jason Voorhees has become an iconic horror staple over the years and over four thousand billion sequels, but for the record, in this film, there were no hockey masks, no machetes – and no Jason! Goes to show that with a nothing film with nothing plot and nothing actors (excepting The Bacon!), for the filmmakers, 13 was truly a lucky number.