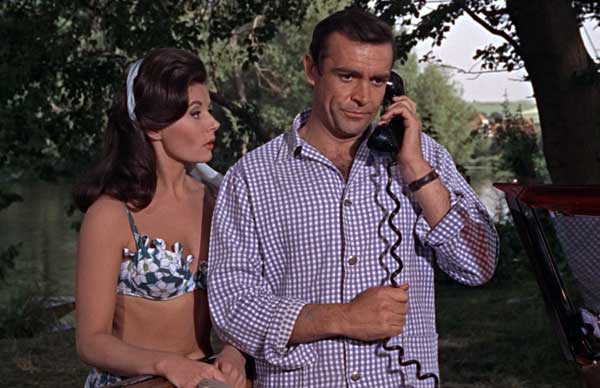 “Oh James, will you make love to me through my granny panties?”

From Russia With Leering.

James Bond 007 returns in FROM RUSSIA WITH LOVE (from Ian Fleming’s 5th Bond novel, publ. 1956), the first sequel to the first ever James Bond movie, DR. NO.

And it is… uh… I don’t know how to break it to you Bond fans, but try to sit through this movie in 2016 and let me know how many times you flinch from the inert filmmaking, the theatrical acting, the juvenile framing, the laughable action (replete with Spock Chops aplenty), and the misogynistic leering. Especially the leering. 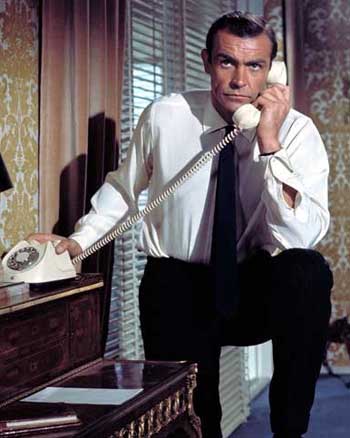 Robert Shaw is blond and buffed Russian agent Grant (who looks more like a Nazi than a Cossack. Is he holding in his gut or were we all actually that skinny once?). The interaction between Bond and Grant is one of the film’s demerits: they are the hero and his nemesis, but share such minimal onscreen time being at odds with one another, it seems like writer Richard Maibaum was attempting to string out some kind of grandiose story of two titans circling each other but fearful of meeting for the Armageddon it would cause. Attempted and failed. To set up their rivalry, the cold open (pre-title sequence) shows Shaw stalking and strangling Connery! – it is revealed immediately Connery is just a guy wearing a Connery mask; meaning Shaw is being trained to specifically hunt Bond! Even with this scene, Maibaum loses us along the way with too many people to care about, too much walking, too many hotel rooms, too much sitting, talking, sleeping, kissing, and, of course, leering.

There is a story somewhere here (of the Russians employing a chess master to design some kind of ultimate weapon that is shaped like a typewriter, which Bond must steal for the fate of the free world blah Cold War blah), but the throughline is buried in the fog of bad filmmaking. Not “bad” per se, but “dated.” Filmmaking technique and technology has leaped so far since the 1960s that the Bond films look quaint and stone-age, even though they were supposedly dealing with cutting edge technology in their time – “technology” which amounted to plastic gizmos and basic weapons that were disguised as household items.

Then there are the once-ominous visuals now reduced to hilarity because we’ve seen them done so many times as satire, most notably by AUSTIN POWERS: the shadowy boss of SPECTRE, known as Number One (Anthony Dawson), stroking the white pussy in his arms, berating a stone-faced woman in a severe pinafore known as Number Three (Lotte Lenya); pressing buttons on his desk that look like marshmallows to automate doors. They’re talking about killing James Bond, but we can’t hear the ominous dialogue for the laughing. Our laughing.

…the film is highly immoral in every imaginable way; it is neither uplifting, instructive nor life-enhancing. Neither is it great film-making. But it sure is fun.
— Richard Roud, “The Guardian” (Oct 1963)

FROM RUSSIA WITH LOVE was a “big” movie – exotic locations, exotic women, exotic deaths – and a runaway success, doubling DR. NO at the box office, becoming the most popular movie in Britain in 1963, winning a BAFTA (Best Cinematography 1964), and nominated for various other awards, including Best Original Song. And it’s a hoot seeing Sean Connery this lean and Brylcreem… but in retrospect, we are taken aback at the strident sexism exhibited by the supposed hero and his cronies. Now I am as “sexist” as the next regular cucumber (meaning there are female jokes we all guffaw over for their stereotypical humor or commonality, but we essentially respect women at a human level), but these people barely consider females a part of the human species! Truly, women only exist in their society in relation to their usefulness to men, whether it be for dictation, sex, child-bearing or information.

Tatiana, a female Russian agent (insufferable Daniela Bianchi) has been sent by Number Three to infiltrate Bond. Bond tells her to talk into a “tape recorder shaped like a photographic camera” – SO FUTURISTIC! – and she constantly interjects her recording with pleas such as, “Make love to me, James, all night long!” Because – chicks, huh. A gaggle of British male agents gather around listening to this torrid slop, along with Miss Moneypenny, who is transcribing. She is shown “warming” to the conversation to such an extent that M sends her out of the room like an errant schoolkid! Because you know how women get. LEER. Moneypenny leaves the room, turns on her desk intercom and continues listening to the steamy recording. Because she’s a woman, right? She can’t get enough of this Harper-Collins crap! So who is transcribing in the other room? M breaks into her intercom, saying, “Since you’re still listening, can you take a note to Bond?” and we can just feel the collective male LEER wafting through the intercom at the silly woman with the wet panties. 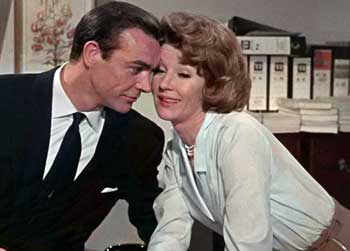 If you want to understand why women hate men so much, watch FROM RUSSIA WITH LOVE.

Not that I want to turn this into a rant for women’s suffrage, and not that the film is making any political statements at all, but the passage of time allows us to look back in horror at the way women were regarded in this era. It absolutely distracts and dilutes the enjoyment of what is essentially a boy’s brainless summer spy movie.

There’s the Greek guy (Pedro Armendáriz) with the multitude of sons who says to Bond, “That’s not the only thing you want from her!” LEER. Tatiana says to Bond, “I think my mouth is too big.” Bond replies, “It’s just the right size – for me!” Do we even have to say, Get your mind out of the gutter? Because that’s where this movie is LEERING from. The porter ogling Tatiana like a piece of meat while she is standing right there. He leaves LEERING. The opening titles on naked women’s bodies. LEER. And the lesson learned: If a woman is good-looking (Tatiana), she is a brainless bim. If she is not good-looking (Number Three) she is evil. Got it, movie!

And finally, we come to what would become a Bond convention: the villain who talks too much while he has a gun on the hero. Grant not only explains the whole villain scheme while he has a gun on Bond, he then takes out of his pocket the one copy of a film reel he is going to use to blackmail Bond AND a letter indicting Bond… both of which Bond, of course, destroys after he Spock Chops Grant. It’s like a child wrote this screenplay. Ian Fleming should not take all the blame, as once anything becomes a Hollywood property, it is doomed.

Terence Young (who also directed DR. NO) displays his complete lack of talent for staging action scenes and blocking actors, right up to the last “fight” between Number Three and Bond, which looks like an unrehearsed ballet between two people who don’t know how to dance. I mean, who choreographed this fight? Billy from the third grade? These people jerk around doing the Batusi until the hot chick shoots the ugly chick. Because – of course.

Proving that hot chicks are good for more than just the two things they’re good for. Can I get a LEER?

imdb
Word Count: 1,340      No. 1,263
“From Russia With Love” (opening credits)
FROM RUSSIA WITH LOVE is the 2nd Bond movie, and the first to feature sexy ladies combined with the opening titles. The 1st Bond movie DR. NO featured silhouettes of dancing men and women in its second half, but it was more to reflect the beatnik era than to slyly showcase the female body. This gimmick would continue until the present day.
Matt Monro would perform the title track with lyrics, during the final sequence and outro credits.