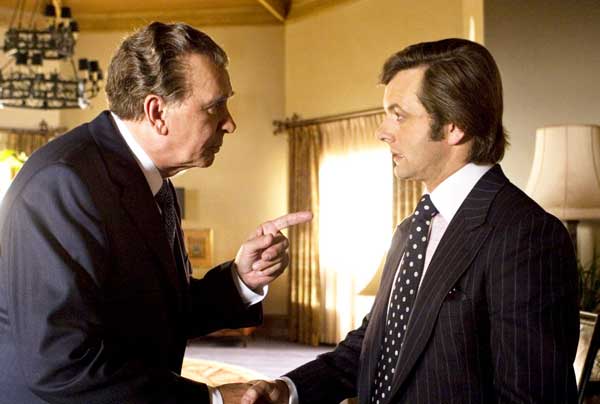 “You’re taking my crimes out of context again!…”

and the Truth shall set you bleed…

Based on Peter Morgan’s stage play of the same name, from the stunning real life interviews that ex-president Richard M. Nixon granted British television host, David Frost in 1977, Ron Howard‘s compelling FROST/NIXON does what Oliver Stone’s milky W. never could – it gets the job done.What job is that? Putting Richard Milhous Satan’s Vagina Nixon in his place, in that exclusive niche in history reserved for the lowest of felonious, unrepentant bottom-dwellers who were never tried and fried like the criminals they were. After the courts never did their job in convicting Nixon, after President Ford pardoned the son of a whore (with the public disapproving 2 to 1), after America thought he had slimed out of their grasp, it took a Brit TV talk show host to corner Nixon into a roundabout admission of guilt in the Watergate scandal.

FROST/NIXON opens in 1974 with Watergate all over the news. Exasperated author James Reston (Sam Rockwell) echoes American sentiment regarding Nixon’s 1974 resignation, “Instead of satisfaction, I got angrier! There was never any admission of guilt!” Brought onboard the Frost team for his passion, this underlying theme fanned Reston’s engines and gave the Frost interview team a goal. 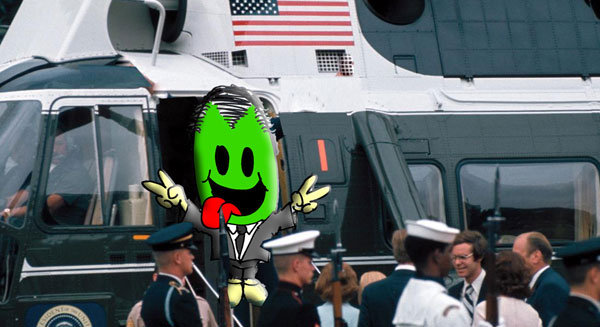 Michael Sheen plays David Frost as a playboy television host by way of Austin Powers (“Yeh, baby!”); Frank Langella plays the marble-gargling Nixon by way of Satan’s Vagina, though not without a touch of pity – which we should never succumb to after considering Nixon’s laundry list of premeditated crimes. Both men reprise their roles from the stage production.

Frost’s research team are incendiary: Rockwell as Reston, Oliver Platt as author Bob Zelnick and Matthew Macfadyen as producer John Birt, so British you could hear his shirts starching. Rebecca Hall is Frost’s eye-candy, only here to wear slinky dresses and almost expose her ta-tas.

By this movie’s account, Frost got the idea to interview Nixon purely as a marketing ploy, seeing the sky high ratings Nixon’s farewell address garnered and wanting to capitalize on that viewership. It sounded good enough on paper to accrue his ambitious, dedicated team, but Frost’s profile at the time was that of a low-rent television host whose shows were flagging, so advertisers and sponsors were almost impossible to entice.

Nixon’s agent (a smarmy Toby Jones) demands an unprecedented $600,000 for the interview, which Frost accedes to, paying Nixon the $200K deposit from his own money. In this age of middle-men, agents, managers and P.A.’s, it seems incredible that Frost dealt with all his business himself, making personal appearances to ask/beg for money from the lowliest weedwacker companies upwards.

By the time of the actual Nixon interviews, Frost was still in the financial hole. And from the initial interview rounds of Nixon besting Frost, everyone believed they would die a gurgling death there.

Incensed at making guest appearances at functions where people would jump down his throat with Watergate inquires, Nixon was seeking a sympathetic forum (or at least an affable one) where he could re-render Watergate in a favorable light. Ironically, Nixon’s agent accepted the Frost interview because everyone thought Frost would be a pushover (“easier than CBS, a big wet kiss, pitching puff balls”).

Before the interviews, though the Frost team worked their butts off constructing a compelling barrage of inquiry, Frost himself galavanted about town with his eye-candy and relied on his “television personality” experience to counter Nixon’s skull-crushing onslaught.

On March 23, 1977, the first Frost-Nixon interview was taped. Frost thought he nailed Nixon with the very first question, “Why didn’t you burn the tapes?” Unfortunately, it was Frost who got burned as Nixon gave rambling, 20-minute answers and “controlled the space.” So it went for three out of the four tapings, Nixon never letting Frost edge in, while Frost’s team cringed in their green room and Nixon’s team (including a stolid Kevin Bacon as Jack Brennan, Chief of Staff) quietly sniggered in demonic contempt from theirs.

The interviews were conducted over the course of a month, the last taping on April 22, 1977.

Movie depicts Nixon making a drunken phone call to Frost before their last interview. This apocryphal incident spurs Frost into a research frenzy that allows him to confidently confront Nixon for the final interview. For dramatic effect, movie portrays the final interview as the most damning for Nixon, as Frost wears him down with copious notes and repeated phrases “coverup” and “obstruction of justice”; pushing Nixon to admit the Watergate actions were not “mistakes” but “crimes.”

From righteously spewing “There was no coverup, it was political containment,” Nixon eventually relents begrudgingly, “I let down my friends. I let down the country. I let down our system of government and the dreams of all those young people that ought to get into government, but think that it’s all too corrupt,” and “I gave them a sword and they stuck it in with relish.”

The killing stroke came for Frost when he badgered: “Are you really saying that in certain situations the president can decide whether it’s in the best interests of the nation and then do something illegal?” and elicited from Nixon, “I’m saying that when the president does it, that means it’s NOT illegal!”

And the world stopped spinning…

Seeing Nixon crawl back into Satan’s Vagina was a discomfiting experience for all.

What is the purpose of reviving Tricky Dick in our minds only to re-bury him? Why re-destroy the man who devalued the American presidency and simultaneously alerted America to the checks and balances that needed to be imposed on the “imperial presidency”? Because it arrives at an apt point in history when the only other politician deserving of Nixon’s exclusive criminal niche is doing exactly the same thing.

Since Nixon’s long-overdue death in 1994 from stroke, only one man has matched in criminality that helldog birthed from Satan’s own vagina – you know him as The Oil Idiot of Texas, that moron cowboy coward with the skunkweasel demeanor and non-functioning neocortex – George W. Bush.

With his December 2008 “exit interviews” to gutlessly compliant newsfolk, Bush desperately seeks to salvage his diarrhetic legacy – almost identical to Satan’s Vagina: devaluing the American presidency, mismanaging wars, criminally forging an imperial presidency – only wasting America’s time. Those who know the truth are not listening; those who are writing history are not taking notes, and his worshipful 20-percent of Ku Bush Rednecks who embrace his outright lies-within-lies do not matter in the scheme of cognizant humanity.

Nixon’s approval rating was in the low 20s when he resigned in disgrace in 1974. Bush’s approval ratings at the end of his illegally-won two terms – exactly the same; unfortunately, Bush was allowed – by the spineless American people and pathetically ineffectual Congress – to serve out his presidential time.

David Frost has interviewed seven American presidents, including George W. Bush. When interviewing Bush as “president,” Frost would have only been allowed puff balls. But Bush is no longer president…

It’s been a long time since Frost commanded ratings like those for the Frost/Nixon interviews. He made his money back a thousandfold and gained a rep as a wrecking ball interviewer. To outrocket those ratings, may we suggest, Sir David Frost, inking a deal for Frost/Bush?

Oh, what wonders of felonious, unrepentant bottom-dwelling truth could Frost dredge from that hellish vagina…